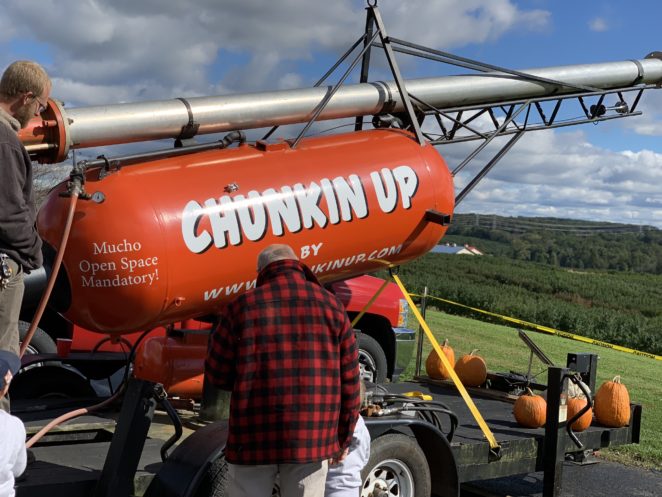 I would like to dispel a rumor to start. My wife did not, upon picking a pumpkin to be chunked off into space, ask if it was possible to have her husband hold the pumpkin while it was being launched. As the person that started that rumor, I felt it was only fair that I will be the one that dispelled it as well. My wife’s pumpkin disintegrated as it came out of the giant pumpkin launcher. The operator said, “that is the first time I have ever seen that.” I told my wife it was probably fate.

The chunker launched the pumpkin about 200 yards down the hill. If you hit the target in the middle of the pond at the bottom of the hill, you get a prize. We had had fun watching it launch pumpkins. Don’t ask me why it was fun because I couldn’t tell you. It was just fun to watch the Pumpkin Chunker.

No, I did not hold onto my wife’s pumpkin as it was launched.

Anyone can join the photo challenge, just pick a pumpkin and launch it. The point, shoot share!