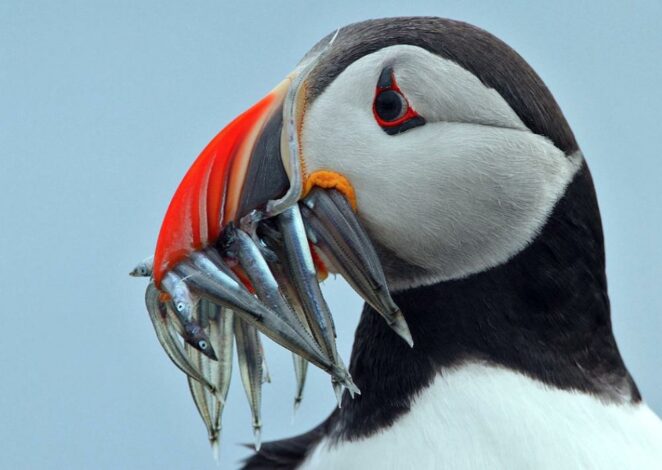 Decided to start another series about Puffins. They are so adorable. I have watched them on documentaries and have seen them at zoos. It is amazing to research and learn more about these adorable seabirds.

Starting with part one of five. Below are some facts I learned and wanted to share. They always make me smile. I hope they do the same for you. We could all use more smiles.

1. HOW MANY SPECIES OF PUFFINS LIVE IN THE WORLD? FOUR

b) Horned Puffin: The Horned Puffin looks similar to the Atlantic Puffin however it is easily distinguished by its mostly yellow bill with orange tip.

c) Tufted Puffin: The Tufted Puffin is the largest puffin and is characterized by long, straw-colored feathers that extend back from its crown during the mating season.

d) Rhinoceros Auklet: Although this Puffin differs noticeably in outward appearance from the other three species of puffin, this brown bird is anatomically still a puffin.

2. HOW MANY ATLANTIC PUFFINS ARE THERE IN THE WORLD? Estimates range from three to four million pairs. Wow that is impressive.

3. WHERE ARE ATLANTIC PUFFINS FOUND IN THE WORLD? Atlantic Puffins are found exclusively in the North Atlantic Ocean. In North America, they nest from Newfoundland to the Northeastern United States. In Europe, they nest south to the Brittany Coast of France, northwards to Iceland, Greenland, and Northern Russia. Most of the world’s puffins are found in Iceland, where sixty percent of the population breeds.  4. HOW DID PUFFINS GET THEIR NAME? The word puffin is thought to be derived from the word ‘puff’ which refers to swollen. And it is the puffin chick that contributes best to this name because of its round, puffed look resulting from its dense cover of down feathers – an adaptation for retaining body heat while the parent is off fishing.  Indeed, they resemble little puff balls with beak and feet. Puffins have also been called  “clown of the ocean” and “sea parrot” because of their clown-like facial markings and colorful beak.

5. HOW BIG ARE PUFFINS? Puffins are usually 10 inches tall (18 cm), which is about the height of a quart jug of milk.  The puffin weighs about 500 grams, similar to a can of soda.