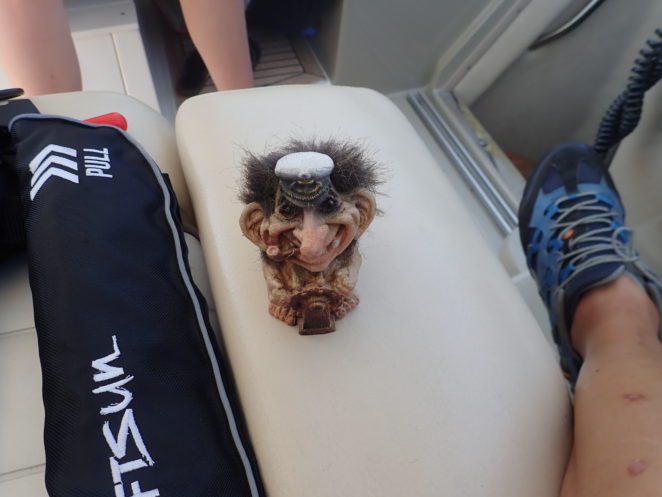 If you, click the shutter you’ve captured a moment. There are before and after pieces to that moment. They say a picture paints a 1000 words. That the actual picture was taken is worth a thousand words. But the picture that wasn’t captured is at times worth more. The one, that got away — the greatest fish story of all time. The picture missed.  We spent a day wandering up the Seven rivers with friends on the boat. It, the Severn River is nestled in the land between Annapolis and not Annapolis. Its banks are filled with grand houses and yet, only two marinas. It isn’t the river that flows past Baltimore, that lies east of the Severn River. It is the river that flows by the US Naval Academy.

We start with pictures of Lars. He is now home, sitting in our kitchen. His hat needs a coat of paint. But Lars is the spirit of our boat. The wandering adventurer, the water Troll that captains our dreams. Lars is the boat troll or gnome depending on the cultural reference you choose. Lars joined our family in Norway and had lived on our boat ever since. He chooses not to winter on the boat. However, He is a captain, not a frozen statue. Lars likes motion so now he sits on the Lazy Susan on the kitchen table. Going round and round, not the bobbing of the river or the Bay that he prefers, but better I suspect for Lars than sitting on a frozen boat during the long dark winter months.

There are moments when in the winter, as the cold air squeezes the warmth out of us, that we miss the boat. There are times when the smell of salt spray seems to appear well. As if, standing on dry land, the sea suddenly there with you. I miss that water feel. I miss the the sound the gulls flying overhead. The sight of an Osprey on its nest, The beatifies as you watch birds dive for small fish. The joy of watching someone as they learn to sail. Pulling the mainsail up, catching the wind and seeing the look on their face as they move out towards the bay. Or the joy of seeing the Naval Cadets on a Sunday. The towboat pulling them out to where they can practice tacking. They can practice sailing. There are few sailboats remaining in the US Navy now, but still, it is a critical skill. Know what the wind can do at all times!