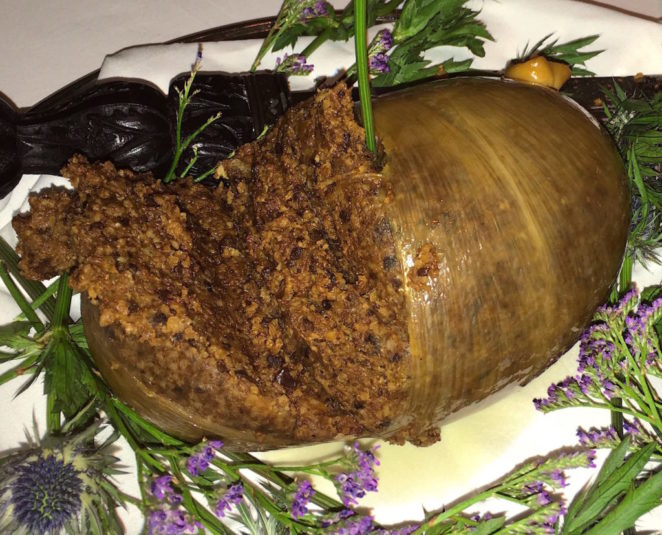 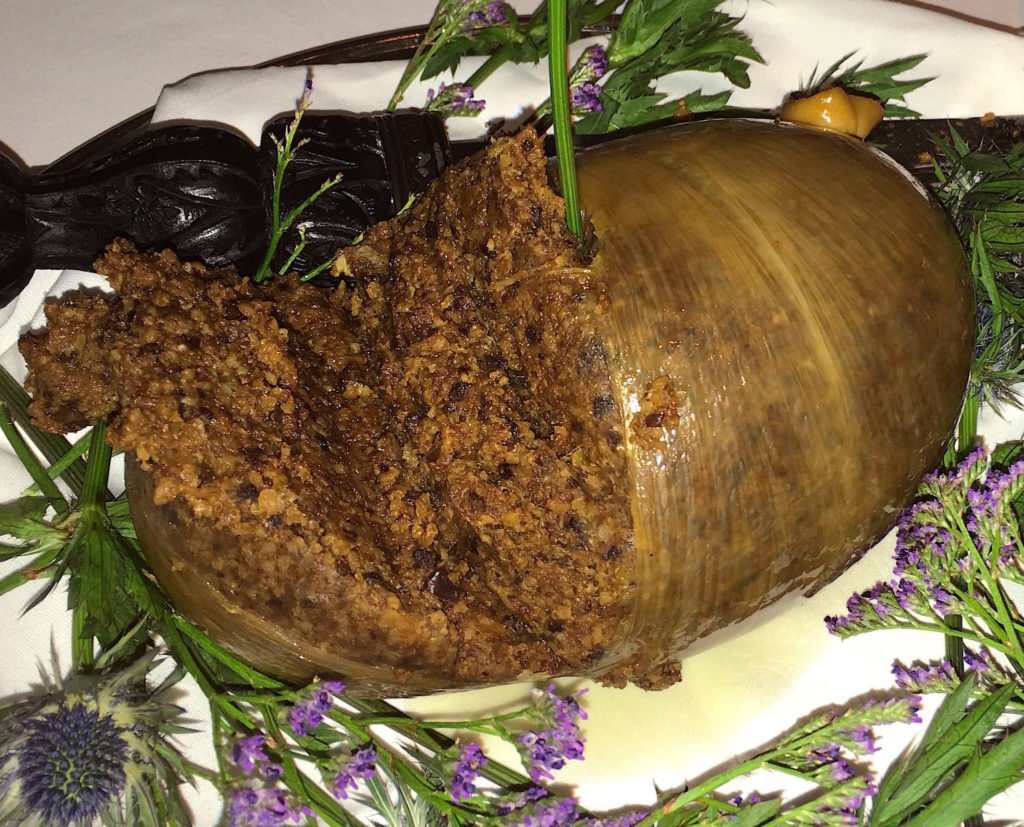 I tasted it. But I also tasted it several years ago and I didn’t like it any better this time than I did before.

Haggis is one of those acquired tastes, I’ve been told, and I guess my stomach just hasn’t acquired the taste yet.

But here we are in Edinburgh, Scotland, on the first day of our Grand Circle trip and I appreciate that we are getting a taste of the beautiful city – its history, cuisine and bagpipe music.

That is a great thing that Grand Circle does. Although we will spend 10 days cruising on the M/V Corinthian, we also will stay one night before the cruise in Edinburgh and two nights after the cruise in London. That gives us all a chance to arrive in time to board the ship and to decompress a bit after our cruise.

On this trip, it has been particularly useful to arrive a day before the ship departs. Several fellow travelers have been stranded overnight in airports and won’t arrive until tomorrow so they will miss our Edinburgh city tour.

I would have been among those late arrivals except for the kindness and help of United Airlines employee Michele. My flight out of Indianapolis was delayed four hours because of weather which would have started that dreaded domino effect – Indy flight late so I miss my Newark flight and on and on. I would have arrived almost 24 hours late.

When I stepped up to the United gate to ask how long the plane would be delayed, Michele gave me a heads up and changed my flight. My new flight sent me flying from Indy to Toronto to London to Edinburgh. I would arrive three hours later than planned in Edinburgh where someone from Grand Circle would meet me. After I left, I heard that the Indy flight was delayed far more than four hours which really screwed up travelers trying to make connections.

I called Grand Circle to let them know of my flight change as I had been instructed to do in the information booklet mailed to my home before the cruise. To show you how well organized Grand Circle is and the great care they give their travelers, the woman who answered the Grand Circle phone asked for my traveler number and already had my new flight itinerary right in front of her.

She assured me that someone would be at the Edinburgh airport to meet me whenever I arrived and told me to call back if I had any more changes, any questions or needed anything. How about that for personal service!

Flying isn’t fun anymore but United and Grand Circle made my flights to Scotland as painless as possible.

When I arrived at Edinburgh airport, a Grand Circle rep was waiting for me. He took my luggage and led me to a shuttle which drove me to the lovely Principal Hotel, my home for the night.

My program director Charley Bennett was waiting at the hotel to greet me and hand me my room key. A bellman delivered my luggage. Charley also told me that our cruise group would gather for our first dinner together in a couple of hours. The Grand Circle pampering had already begun.

It was wonderful not to have to hit the ground running as I often must do on trips. Instead, I had time to answer emails on my complimentary hotel WiFi, walk around the neighborhood to stretch my legs and take a leisurely bath before our dinner at the hotel.

Bagpiper George entertained us before dinner was served. The four cruise program directors introduced themselves and gave us a bit of background information. The haggis made a grand entrance on a platter with a sprig of greenery sticking out of it.

For those who don’t know, Scotland’s national dish is made of sheep’s heart, liver and lungs minced with onion, oatmeal, suet and spices and traditionally cooked in the animal’s stomach. Today, it is usually cooked in an artificial casing instead.

After dinner, time for bed in my beautiful Principal room. No need to unpack because we are heading off tomorrow after breakfast for a city bus tour with several stops, then on to our cruise ship, the M/V Corinthian.

We’ll have buffet breakfast at the hotel before we leave and I’ve already been told that one of the many buffet items is haggis. I’ve tasted it twice. No need to do it again. 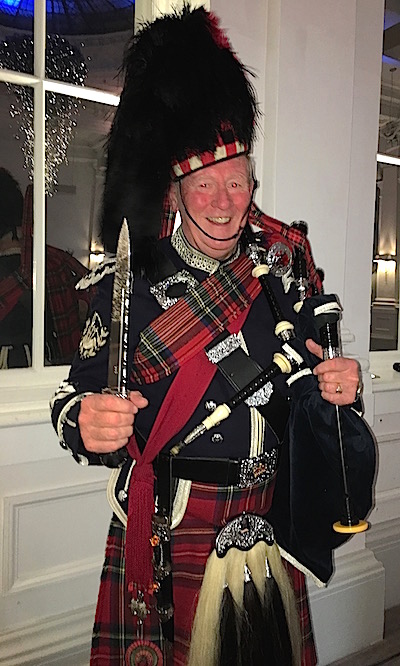 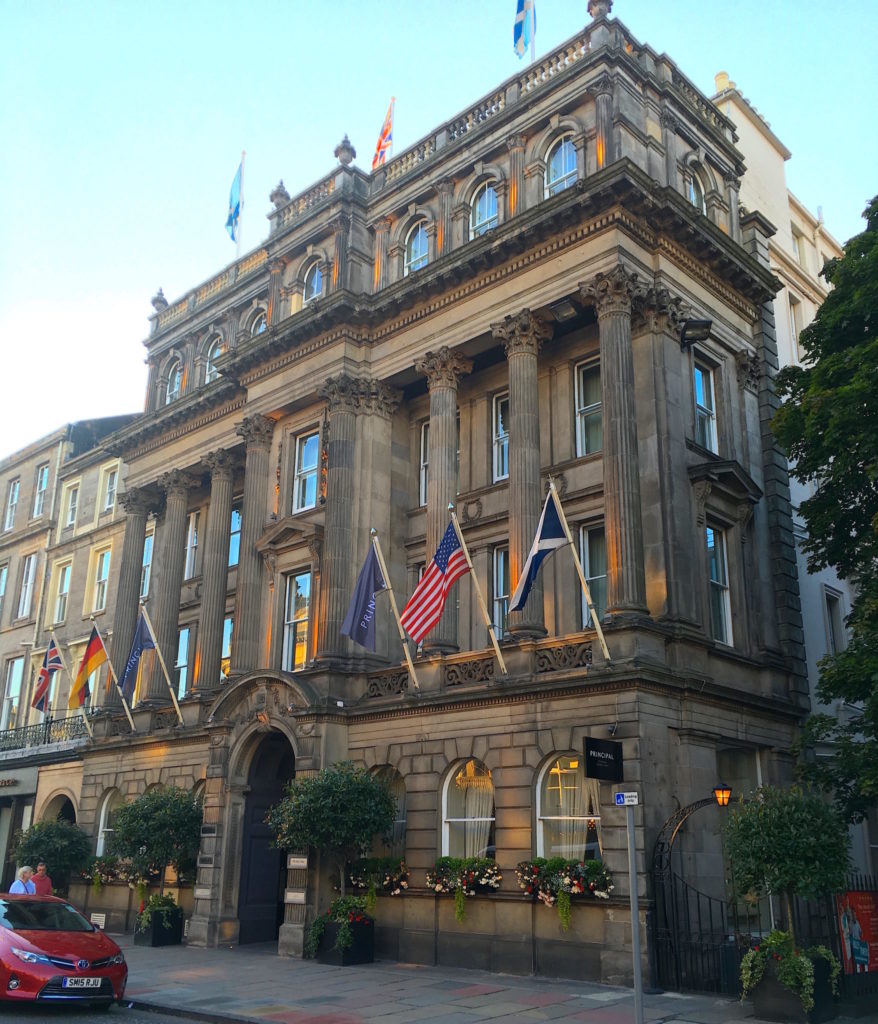 The Principal Hotel in Edinburgh has been welcoming guests since 1881. 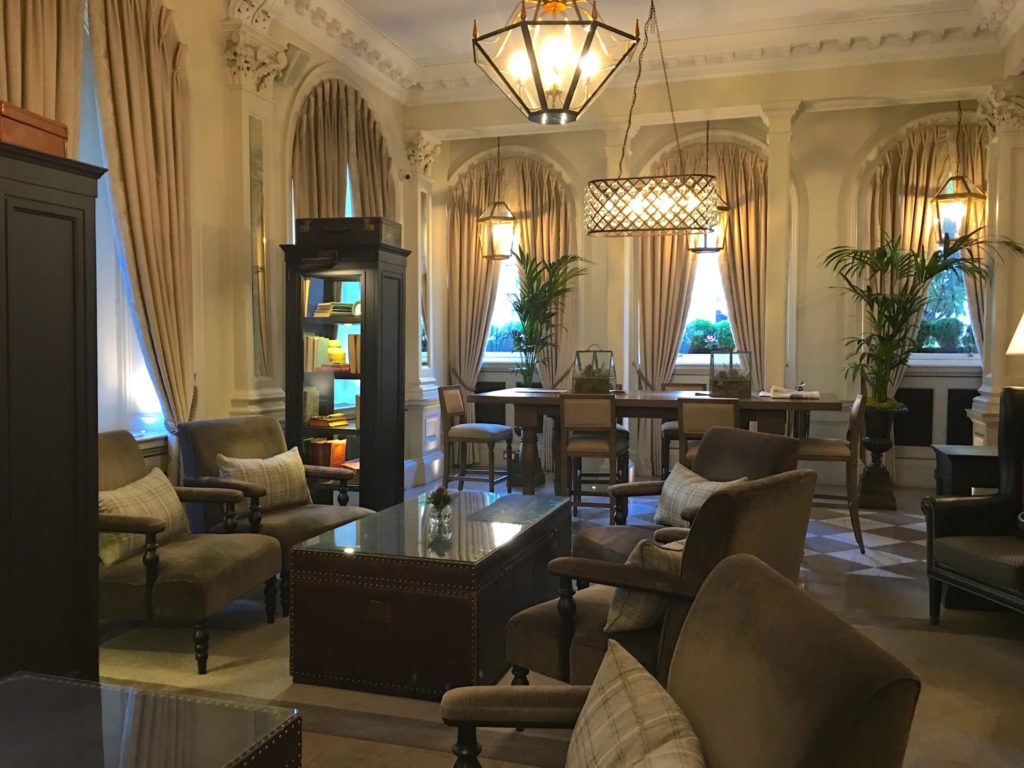 The Principal Hotel is elegant and comfortable. 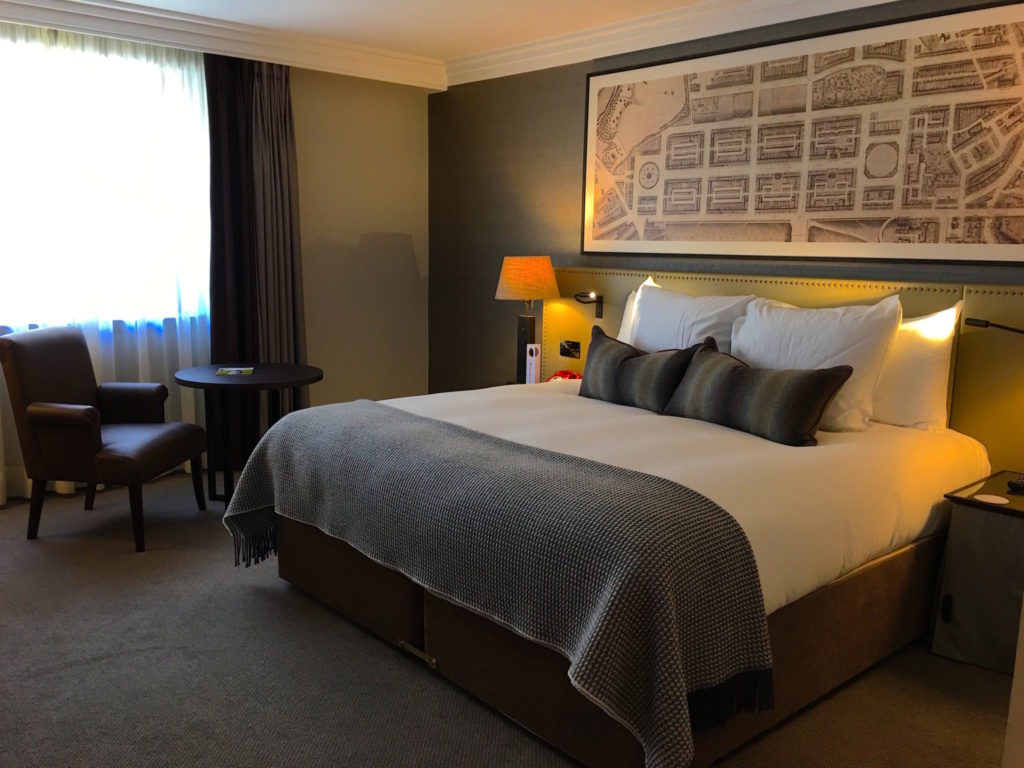 My room for the night at the Principal