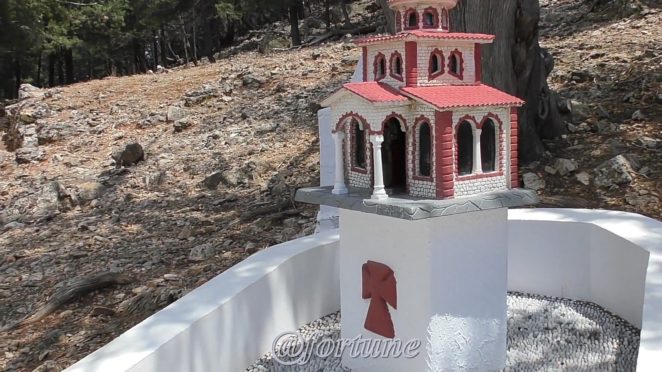 The icon was accidentally found in the 15th century. As the legend says, once a local shepherd, watching for his herd, saw a strange glow on the top of a coastal cliff, which was repeated the next day. He was interested in this lightning but he did not dare to go to the top, fearing the robbers who could hide there on the rock. And on the third day, the glow was repeated. Then, gaining courage, calling other villagers, the shepherd went to the top.

When people climbed to the rock, they saw on the branches of one of the trees a small icon of the Virgin in a silver lining, which also sparked light. Then one of the attendees exclaimed in the local dialect – Tsamba! – which means “spark”, “light”. So began to call this icon – the icon of the Virgin Tsambika.

In the place of the miraculous relic, a small temple was built on top of the cliff, where until recently there was a miraculous icon. They call it today the Upper Monastery of the Virgin Tsambika, or just the Upper Tsambika. Because, in 1760, a new great monastery of the Virgin – Kato Tsambika or Lower Tsambika – was built at the foot of the rock, which for many years had flourished but was left nuns during fascist persecutions, and in which monastic life has not been resumed to this day.