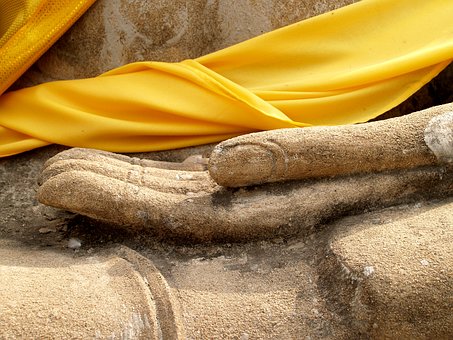 On the 13th of October last year, Thailand’s legendary king, King Bhumibol Adulyadej, died and the country went into mourning for a year. Buildings were draped with black and white streamers, and many Thais and some “farangs” wore a black bow to remember his death. In a few days from now (the 26th of October) he will be cremated but it is unlikely the country will stop mourning.

On Friday the 13th of this year, I went to two banks and found them closed. A national holiday (and day of mourning?)  to honor the anniversary of his death had been announced, and I imagine the 13th of October will remain a national public holiday hereafter. The general public tends to celebrate birthdays but not deathdays. However, making the king’s deathday a public holiday might lead some people to thinking it’s a holiday. It is but again it isn’t. And that’s why at nine o’clock on the evening of the 13th of October, 2017, the police called in on the restaurant where a friend and I were eating. The Thai owners were lucky. There were no beer bottles on the tables. However, the police informed them: “No alcohol.” My friend and I had refused to dine in two other restaurants where the police had already been, telling the staff not to serve alcohol. When I thought the situation might be complete abstinence, I’d gone to a local 7-Eleven to see if I could get a couple of bottles of Leo. I could, so the ban was seemingly in operation in eating houses but not in local stores. Confusion reigned…or didn’t? Who knows? (Who cares?)

I imagine that in the future if the day remains a holiday, it will be treated religiously and alcohol will be universally banned. For the time being, alcohol is merely endangered. Of course, the king’s deathday should not be considered an occasion for partying, and only anti-royalists or mal-educated “farangs” might do so, and shouting and boozy singing should be definitely discouraged but banning alcohol? I’m just not sure, and I don’t consider myself to be an alcoholic or particularly dependent on the toxic stuff.

The king’s deathday this year will be remembered by me for combining that peculiar Thai mix of seriousness and confusion which is gradually diminishing the overall smile in this Land of Smiles.