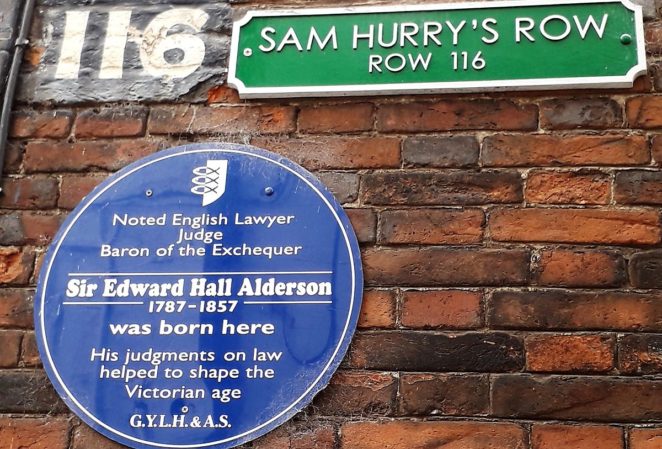 Great Yarmouth in Norfolk, England, is famous for it’s many rows.  These are passage ways between buildings.  Some of them still have shops down them.  Recently there have been new signs put up depicting the name of each row.  The blue plaques are places of interest of well known people who were in the town or events that have happened.  This particular row is row is 116 and as you can see by the picture, is called Sam Hurry’s Row.  The reason it’s called this I shall explain why.

Samuel Hurry was born in 1727 in Gt Yarmouth and was in the Merchant Navy.  It was in 1775 that he became a ship owner and a general merchant.  In 1763 he launched a ship called Pitt.  This was named after William Pitt, who had led the 7 year war.  On 31 October 1789 there was a strong gale, and Samuel was presented with a silver cup for helping sailors that had got shipwrecked.  Samuel was married to Isabella and had one daughter, Elizabeth.  He died suddenly in 1800.

I will need to spend some time taking more pictures of the rows and learning about the history of them, but this is a lot of work.  I shall, though, post more images of the rows in Gt Yarmouth with the stories behind them.