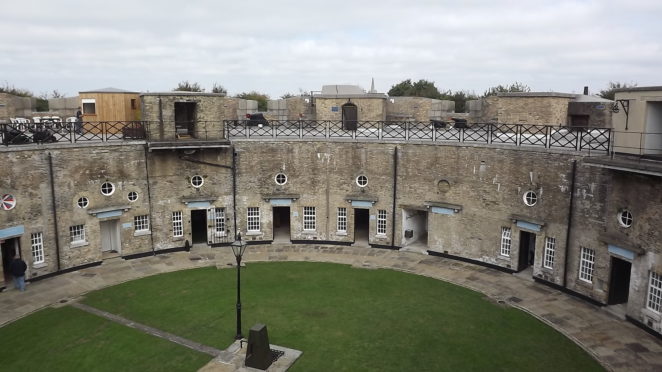 During the Napoleonic Wars (1803-15) there was a very real threat that Great Britain could be invaded by France. In December 1805 Napoleon defeated two of his enemies, Austria and Russia, at the Battle of Austerlitz, and there was every reason to expect that he would then turn his attention to Britain. Attention was therefore given to improving the defences of south-east England.

This was despite the fact that in October 1805 the Battle of Trafalgar had been fought, in which the British Navy under Lord Nelson had had a decisive victory over the French. This gave Britain a huge breathing space, because Napoleon could not invade without a Navy and Nelson, despite losing his life, had ensured that Britain would be the dominant naval power in Europe for decades to come.

However, that did not stop the plans for strengthening Britain’s coastal defences from going ahead. The Redoubt at Harwich was therefore built as part of a chain of forts, known as Martello Towers, that ran from Aldeburgh in Suffolk to Seaford in Sussex, although only two others were of similar size. 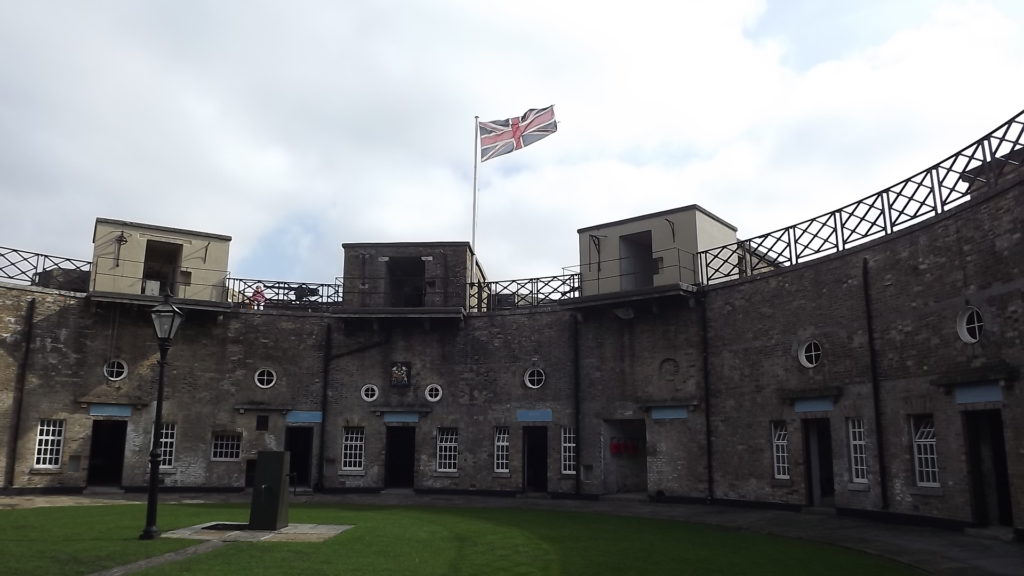 Harwich stands on a narrow peninsula at the mouth of the River Stour, where it is joined by the River Orwell. Together, the estuaries of the two rivers form a substantial harbour area that could be vulnerable to attack. Should an enemy be able to pass this point, it would have river access to both the west and north-west. A fort that commanded the waters on both sides of the peninsula (i.e. covering both the estuary and the open sea) would therefore be invaluable.

The foundations of the Redoubt were laid in 1807, and by 1809 it was ready to be armed, although the work was not completed until 1810. The circular design allowed for guns to be mounted all around the top level and thus able to fire in any direction. The fort was sunk into the top of a low hill so that it would not present an easy target for any attacker. Even today, the Redoubt is virtually invisible until one is almost on top of it. 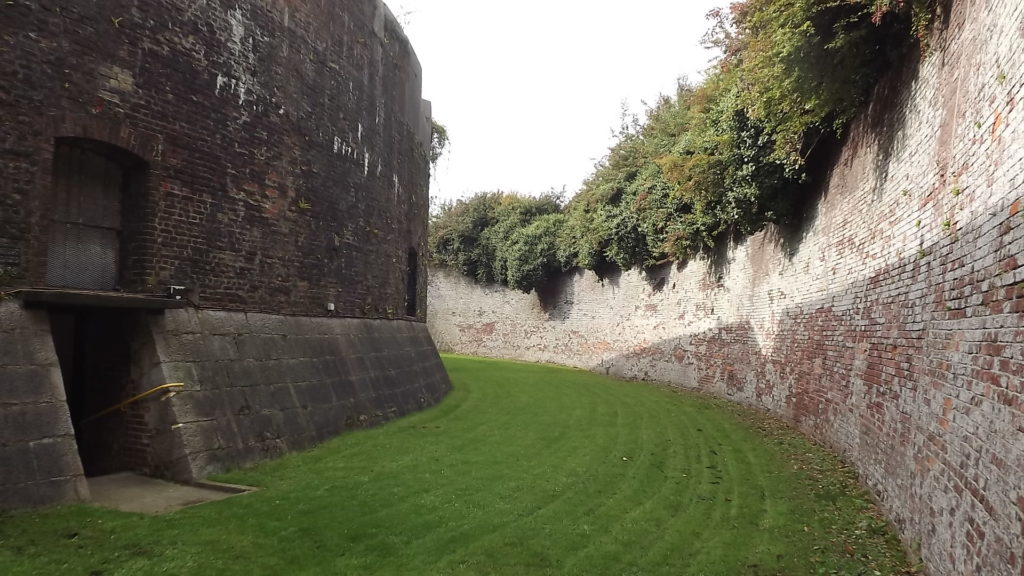 Needless to say, the Redoubt saw no action before the war ended with the Battle of Waterloo in 1815. However, it continued in service throughout the 19th century, with various alterations made to the gun emplacements to allow heavier guns to be mounted, although no shot was ever fired in anger from the Redoubt throughout its history.

In 1910 the Redoubt was no longer regarded as having a defensive function and was instead used purely as a barracks, as it could accommodate up to 300 men.

During the 1920s the fort was abandoned when the area around it was developed for housing, much of which remains to this day. During World War Two the Redoubt was again used for minor military purposes, but not in any attacking or defensive mode. 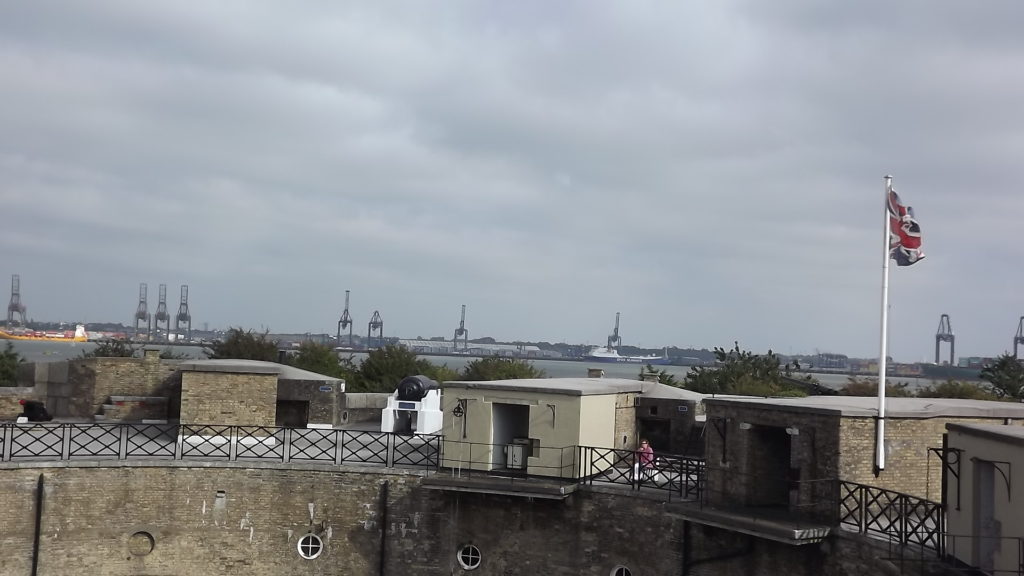 (The top level of the Redoubt, with Felixstowe Docks in the far distance)

After the war the long period of decay began that only ended in 1968 when it was scheduled as an ancient monument by the Ministry of Works. The Harwich Society was founded in February 1969 and in July of that year began work on restoring the Redoubt to its former glory. This effort, which has been entirely carried out by voluntary effort, still continues. The current writer, despite not being a Harwich native or resident, can claim to have played an extremely small part in the restoration effort back in 1971. 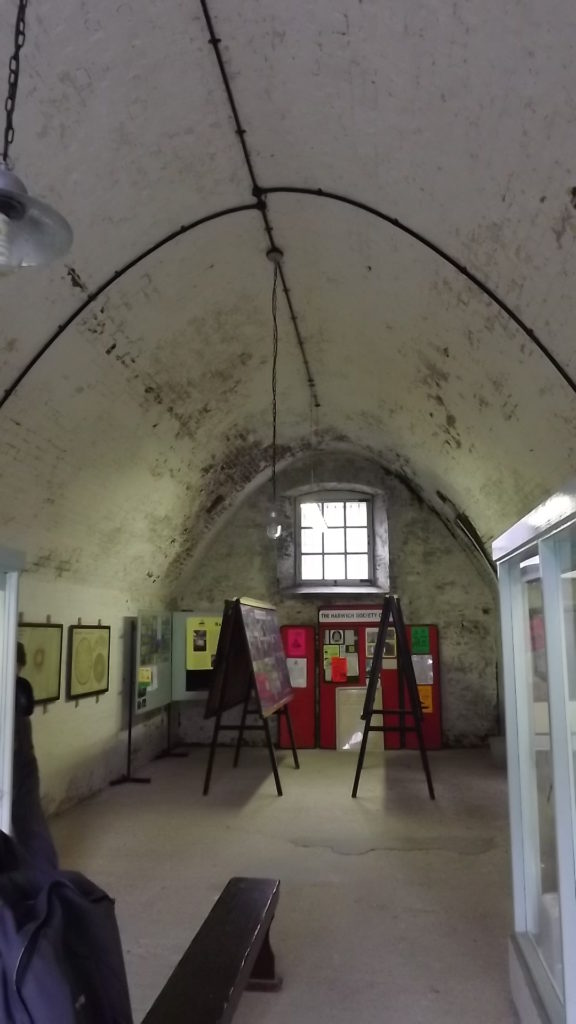 (One of the barrack rooms, now used to house a museum exhibit. Back in 1971 I was one of the team that installed the electric lighting, but I did not have to climb the ladder to fix those conduit pipes!)

The Harwich Redoubt is the largest ancient monument in Britain that is being restored by a voluntary group. It is open to visitors during the summer months (May to August).

An important early stage of the restoration involved clearing vegetation from the dry moat that surrounds the Redoubt. When this was being done a large cannon was found that was part of the original ordnance of the fort. This has now been lifted back into its rightful place, alongside a number of other pieces of military hardware that form part of the museum display, most of which is housed in the former barrack rooms. 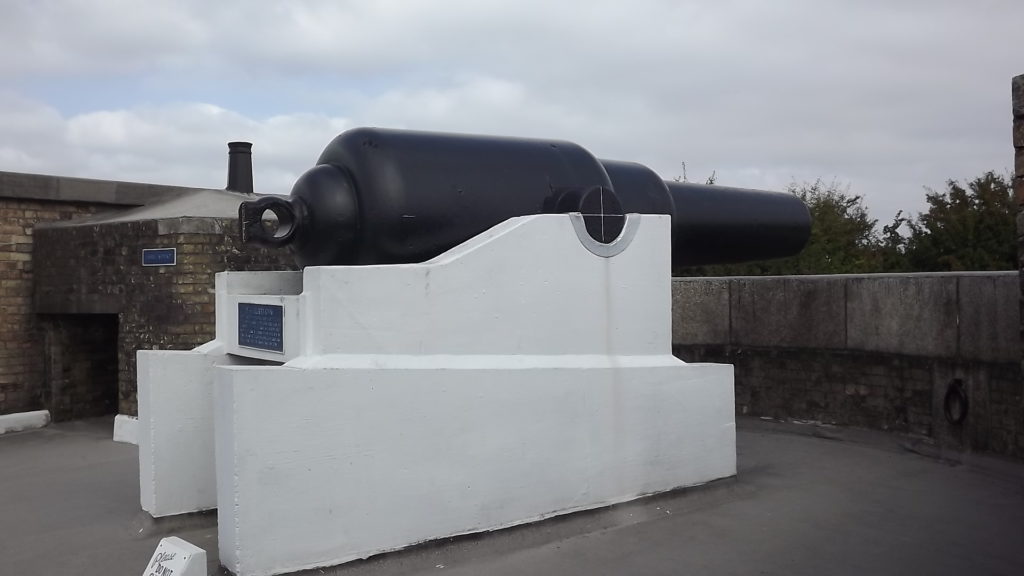 (The cannon that was found in the moat)

All the photos that accompany this article were taken by me in 2013, on a visit that was the first I had made to Harwich in 42 years!