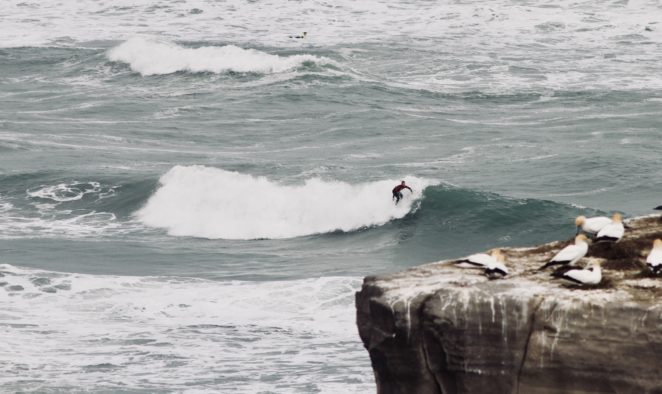 Muriwai is an Auckland West Coast beach and its about an hour to drive there from where I live. It is a surf beach with huge powerful waves. You may notice a surfer on the title page, there was a surfing competition on that day. Frankly, I have never learned to stand up and balance on a surf board, body surfing on a board is easy, the balancing act takes practice and patience. Im still learning to swim so I will stick to that at the moment but I think surfers are very gifted brave and talented.

Now Im working on creating my yearly photographic calendars, and never want to stop experiencing new ventures with art work for example – painting or drawing. Im currently working on a pen & ink drawing of a gannet in flight. The image taken from one of my own photos. 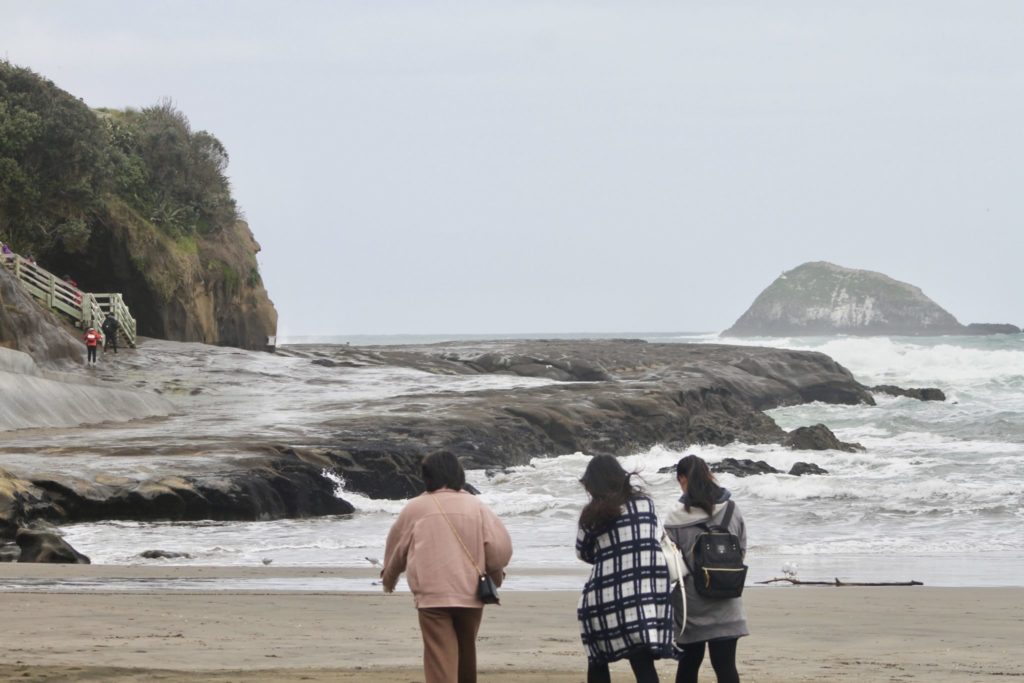 On a Sunday, Warwick my husband, and my budgie Louis in the cage in the back seat headed out to Muriwai the Gannet Colony. Its now early spring and just before little Gannets hatch. We had coffee in a cafe first. I went down to the beach to take photos and then headed up in the car to Maori Bay ( Part of Muriwai Beach) to visit the Gannet Colony. 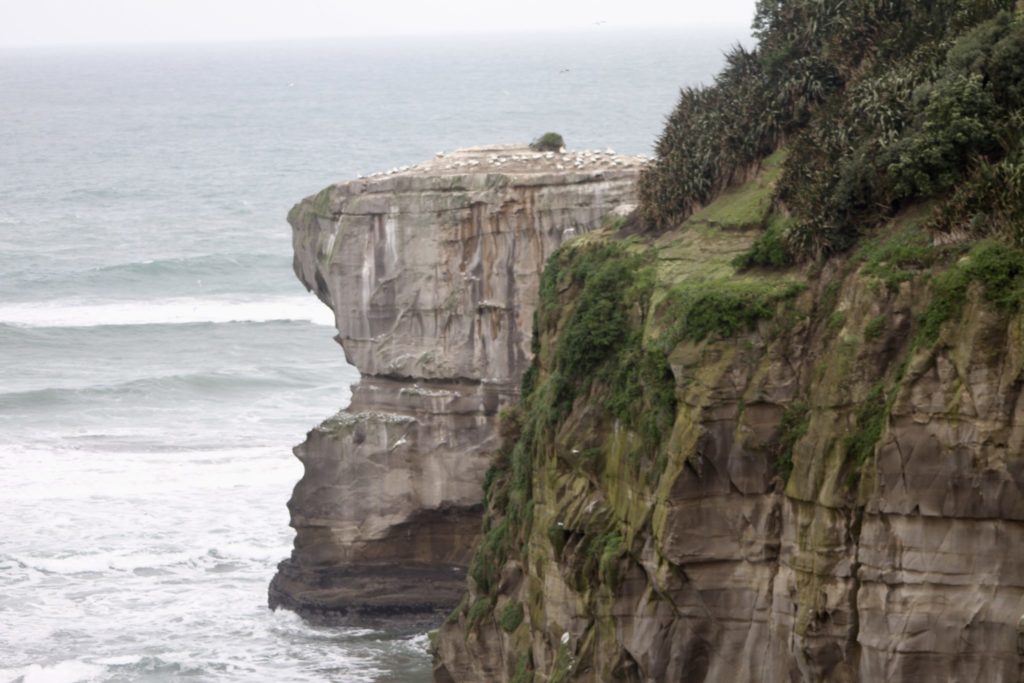 This is the head land from Maori Bay looking due North. Maori Bay is south of the main Muriwai beach. There is a track from this car park to the Gannet colony. My husband Warwick is not able to walk far at the moment and currently awaiting an operation in the Auckland hospital for his shoulder so I go alone and its quite safe. Warwick being a fellow artist has his drawing pad and draws a magnificent scene as I go. 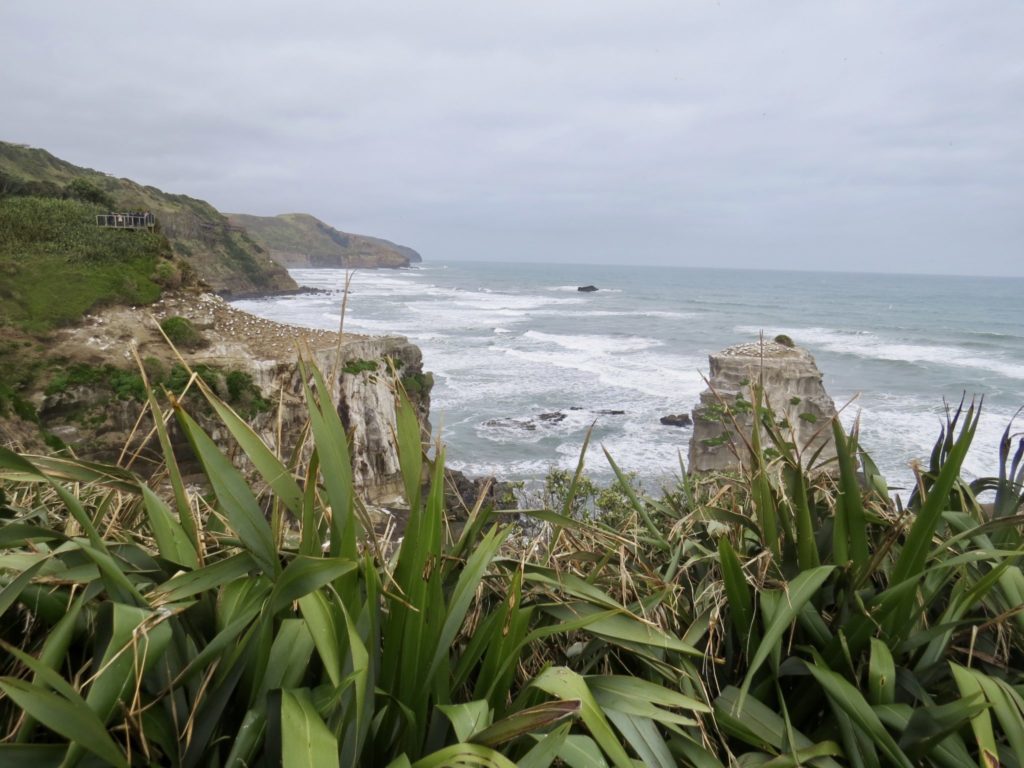 Now here is a comprehensive view looking south from the track I walk along to view the gannets. There are 2 viewing platforms where you can watch the gannets and I felt to go to the one farthest away and the longer platform and on the way took some photos.You will notice the tall rock on the left, that is Gannet Rock but it has more than just Gannets nesting on it. 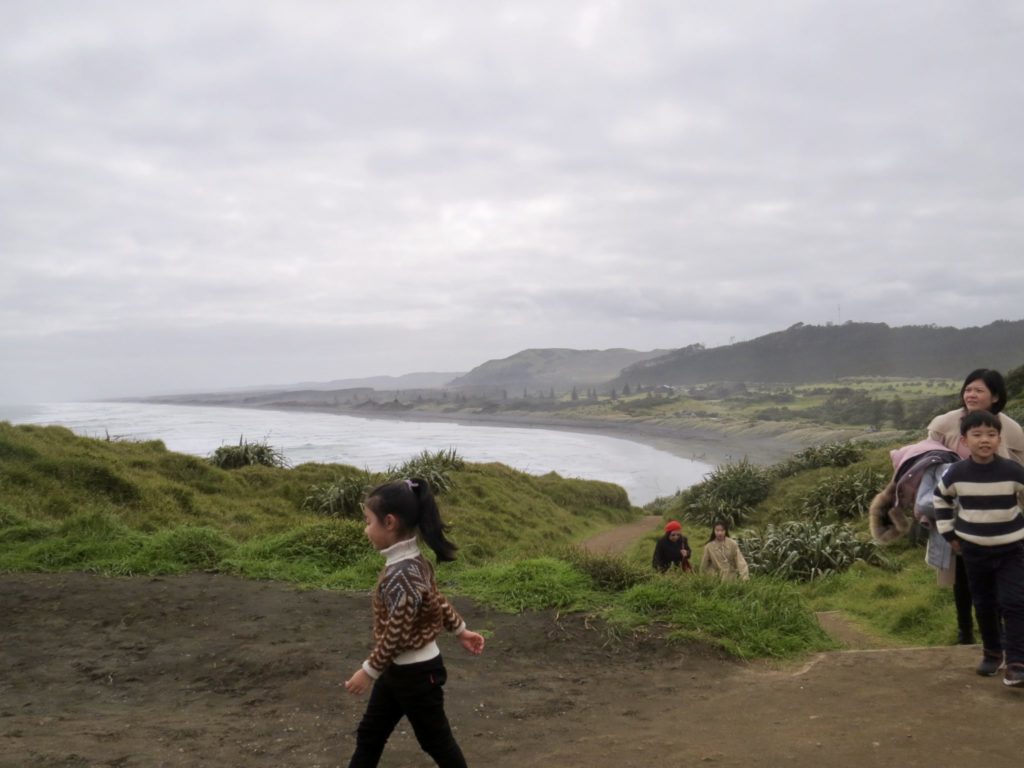 This is a view of Muriwai beach looking northwards. Muriwai beach extends to Kaipara heads which is the mouth of Kaipara Harbour, the largest harbour in New Zealand and the most dangerous.

Most West Coast New Zealand beaches consist of Black sand. Some times made into iron. I am not sure about how much of it is mined, people have protested against it. Rightly so. 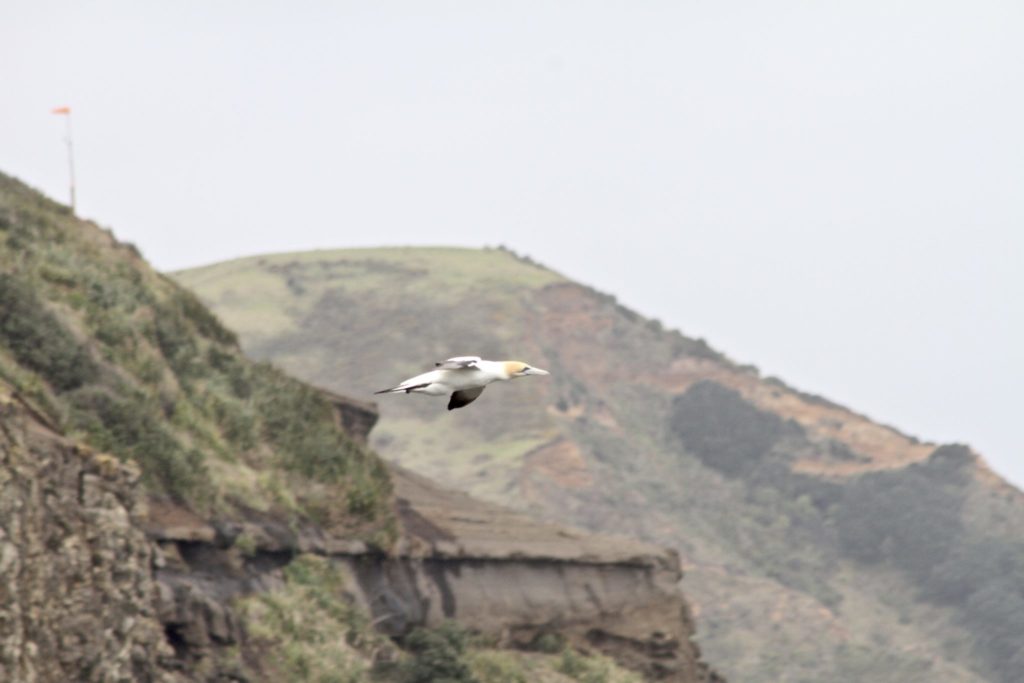 A lone Gannet in this photo glides in, circling to land by its nesting site. They are magnificent flyers. 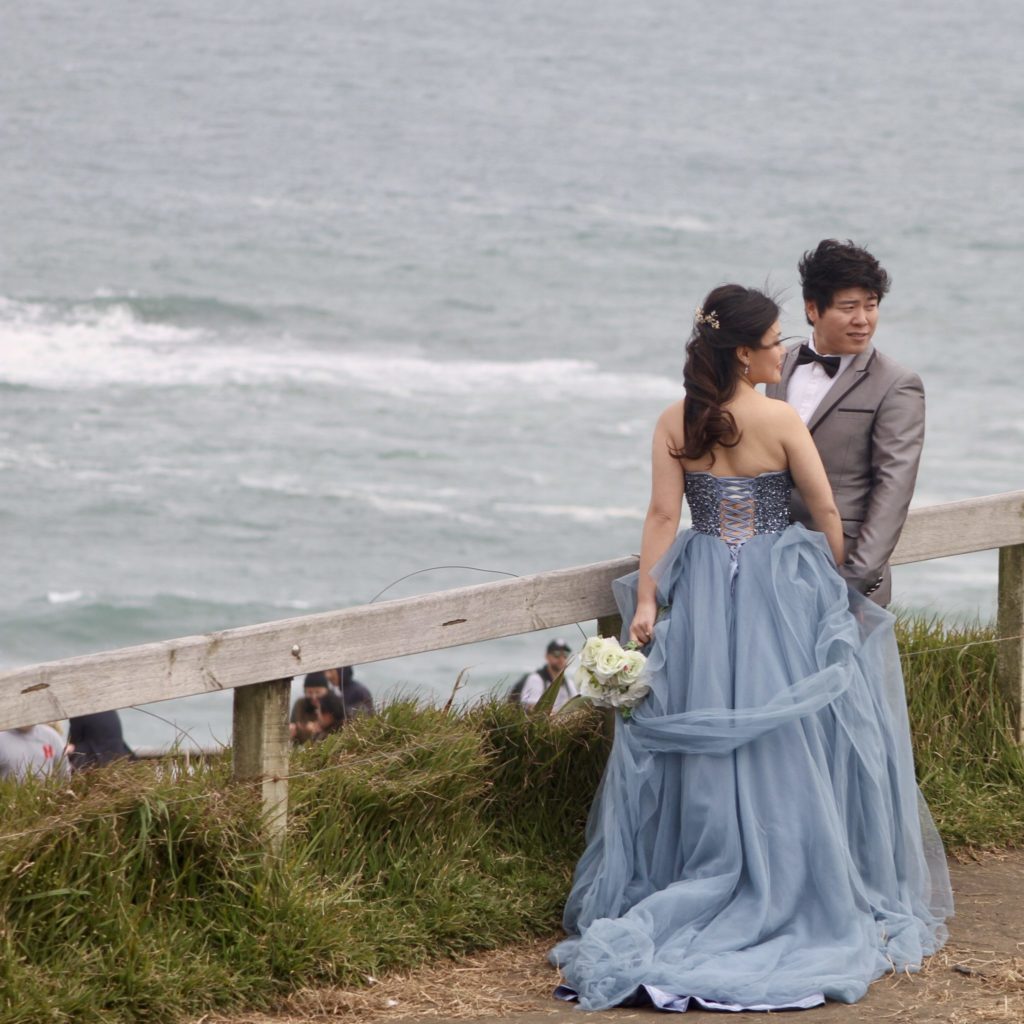 Many Oriental people, like the Japanese come to get married in New Zealand and have their wedding photos taken here, This couple was here this day and so I also had to get a photo as well. 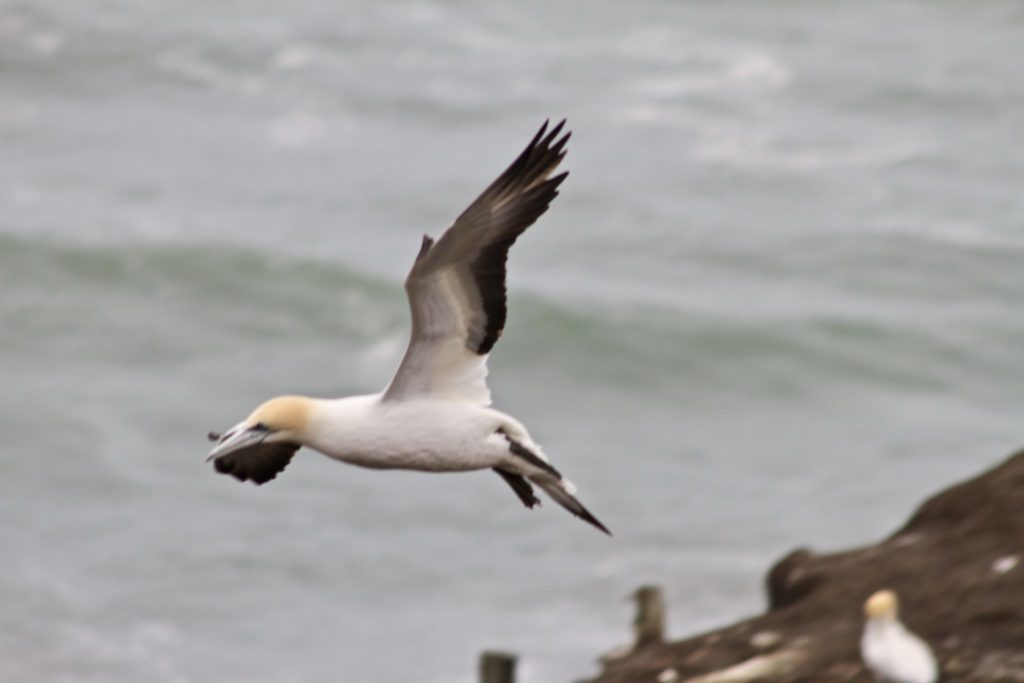 Now I had 2 cameras around my neck, one with an extra zoom lens a Canon EOS 7D and use that for most bird close ups. I also use a Canon Power Shot SX50 HS for scenic views where I want the whole picture. Now I am an amateur point and shoot photographer. Speed is of the essence.

Im convinced you do more work with photography in the editing department after taking the photos as it takes me ages to edit photos or just throw some out as not needed. 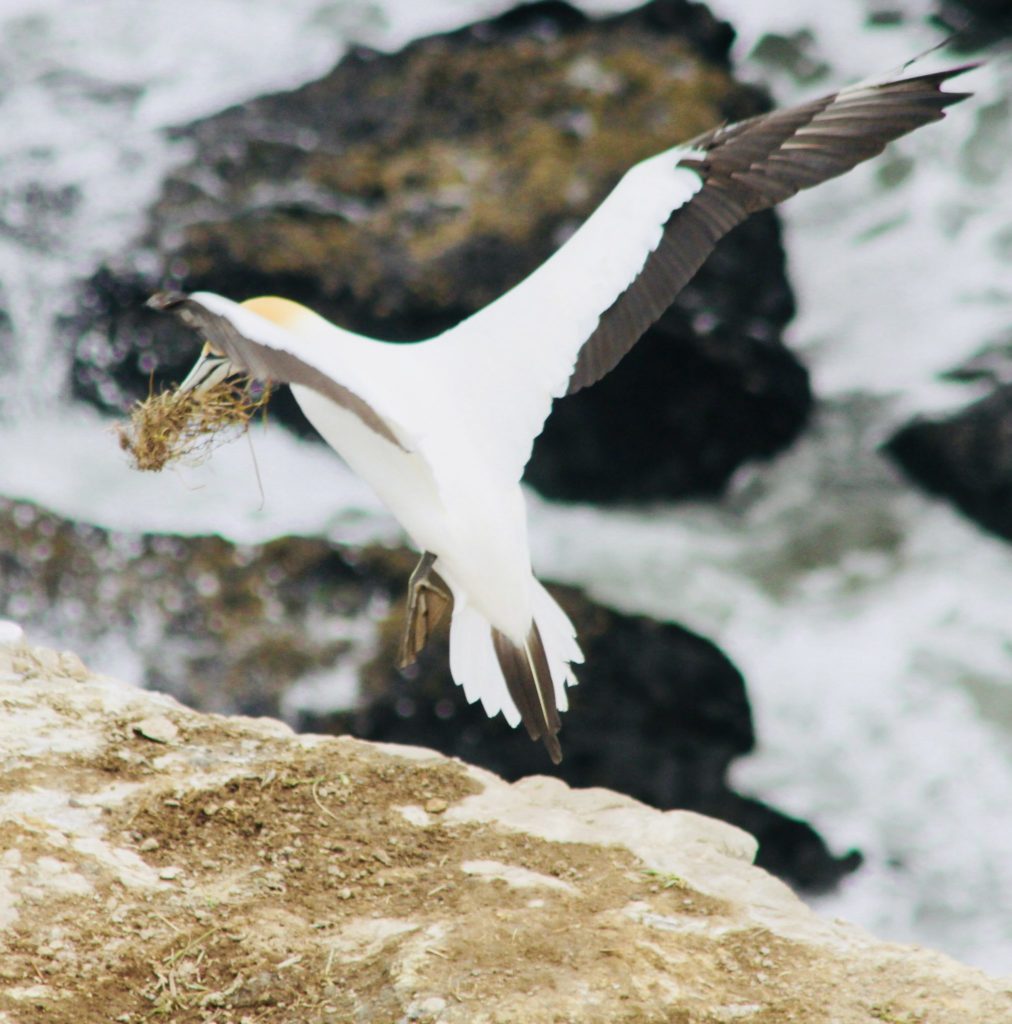 This is a Gannet that is just landing with it’s contribution to the domestic nest!. What I did this day was to follow a Gannet in it’s flight path and take photos as it flew until it landed and pick on another bird.

In New Zealand there is no native animals except birds and marine life. Hence, I take photos of birds or New Zealand marine life or our natural landscape. I like photographing people but Im discreet at what photos I take. 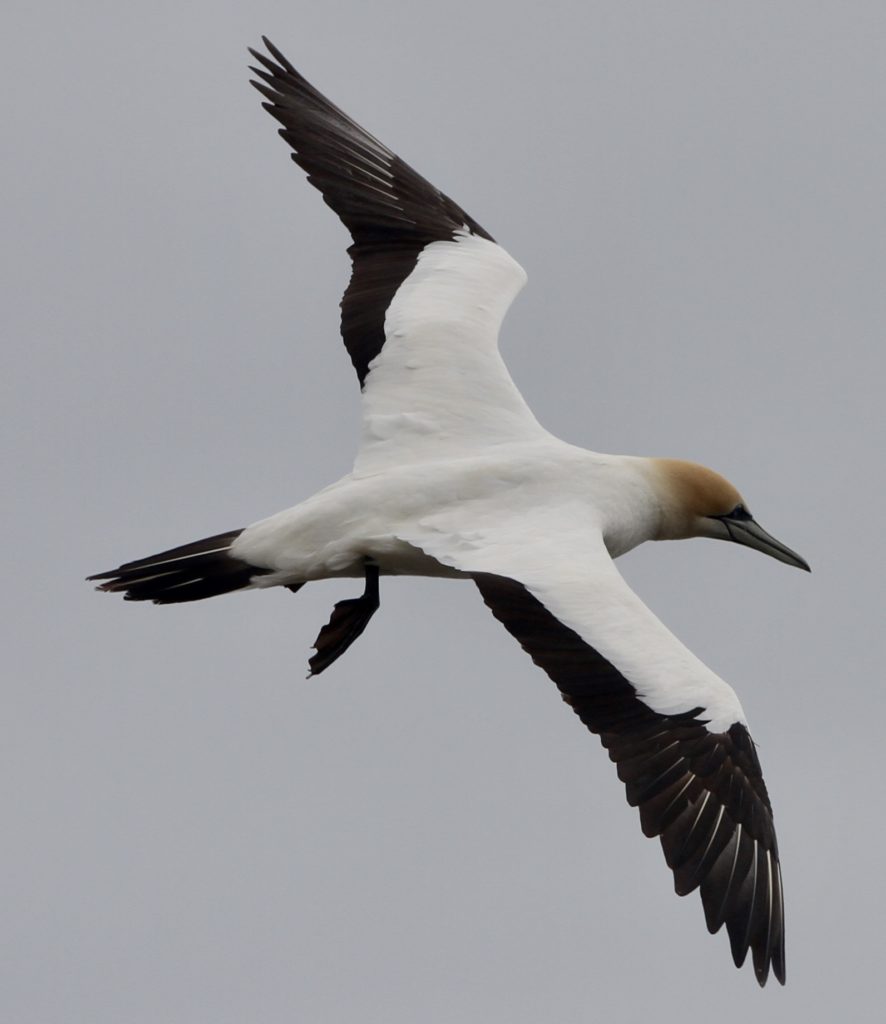 Im not showing you the photos of the gannets Im doing the illustrations for until they are finished. Then you can freely view the lot. Here is a magnificent bird in it’s natural home. Muriwai beach in Auckland, New Zealand. Yes, it often migrates to Australia. it dives into the water for fish at high speeds (about 175 miles an hour)  which would kill most of the living, but it has an ingrown crash helmet and several eyelids and flippers for fast swimming to catch a fish.  It often flies about 500 miles a day.

Just before I end this write up I will also share something else. 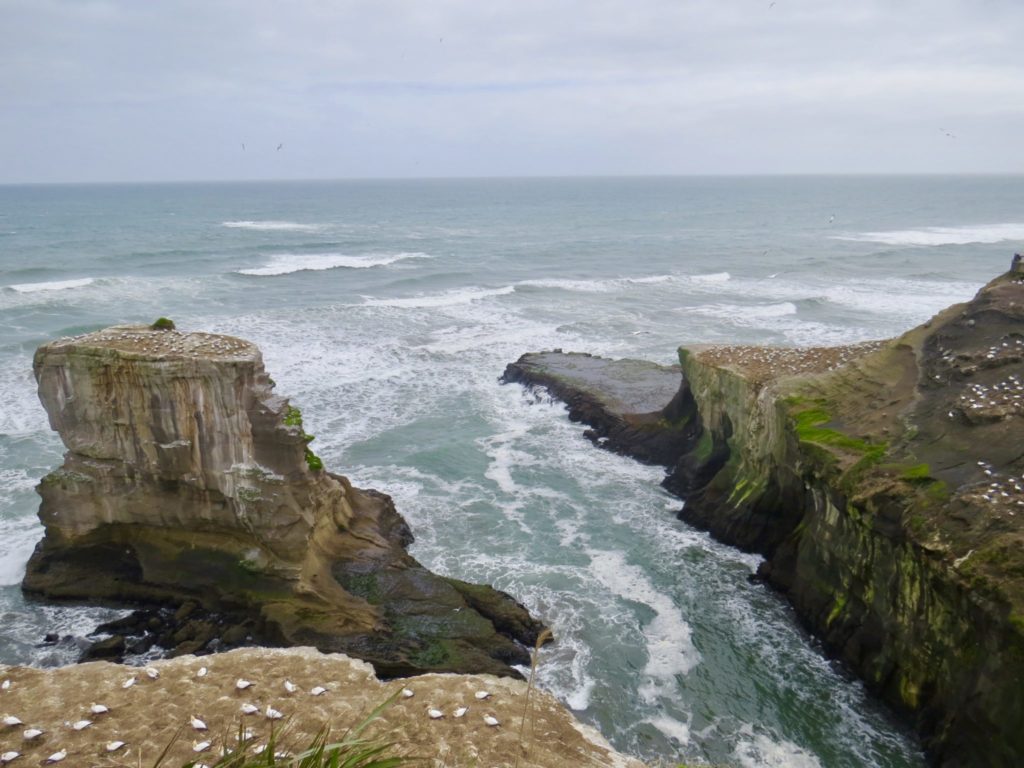 This photo shows Gannet Rock and below the Gannet nesting area. Its fenced off and protected from people, for the Gannet’s protection and people from accidentally falling from the rocks into the sea. Gannet Rock has more than just Gannets nesting on it. Gannets are on top, then Common Terns and also some Sea Gulls. 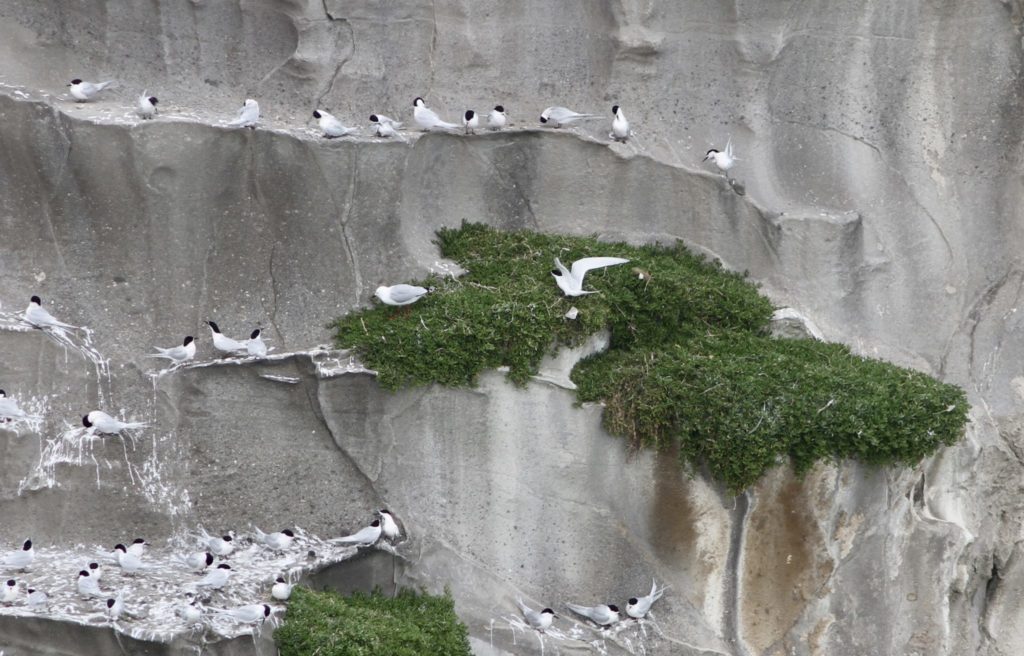 This is the best I could do to photograph the nesting Terns on Gannet Rock. The Terns never came close enough to get a decent photo of them. However, on another trip I did gain some decent photos of the Terns on Maori Bay. The ones shown here are ordinary Terns on Langs Beach. 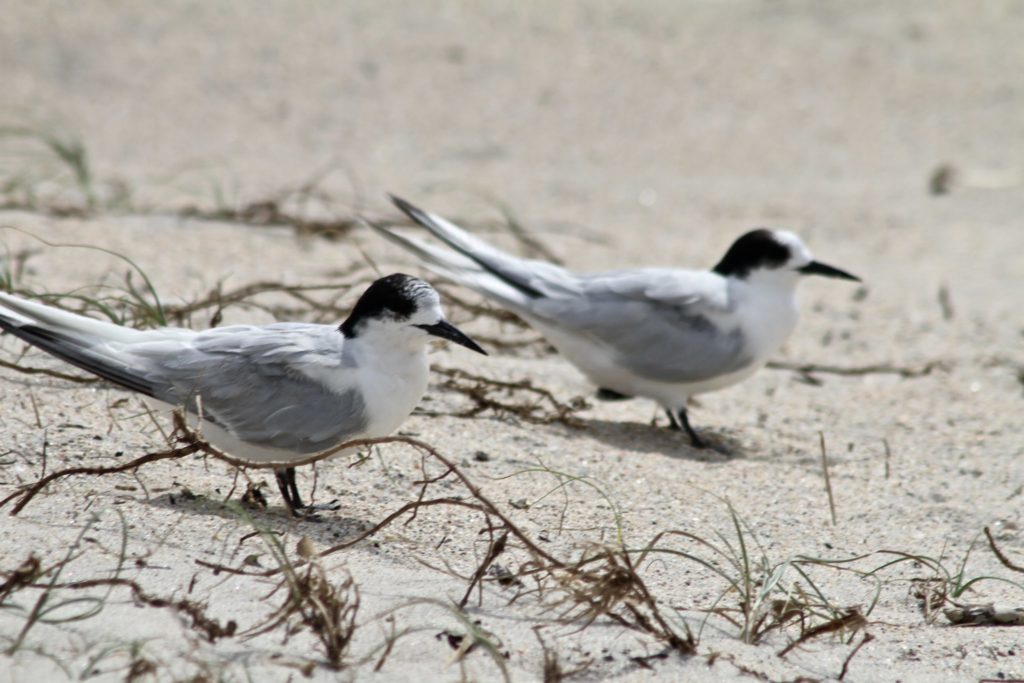