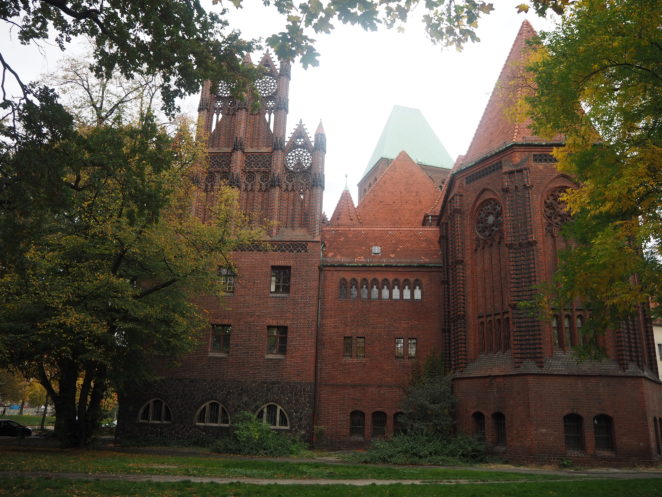 This is an extraordinary building that is well worth a visit if you are in Berlin. It lies on the south side of the River Spree, just opposite Fischer Island which adjoins the much more famous Museum Island. Whereas the five museums on the latter island are always well patronized, you should find yourself with a lot less company as you tour round the Märkisches Museum and take a leisurely stroll around its attractive grounds.

The museum looks at first as though it must be an accumulation of buildings that once housed a medieval monastery, but it actually dates from between 1901 and 1908, having been purpose-built as a museum to showcase exhibits from the local area of Berlin and Brandenburg.

The neo-Gothic architecture (by Ludwig Hoffmann) was inspired by buildings in the region that were built in true Gothic style, notably Wittstock Castle and St Catherine’s Church in the city of Brandenburg. In the entrance hall of the museum is a statue of the traditional hero Roland, this being a copy of a 15th-century original.

The main hall features the original Gothic portal from the Berlin palace, demolished in 1931, of the Margraves of Brandenburg. Also to be seen is one of the original horse’s heads that was once part of the Quadriga on top of the Brandenburg Gate.

There is much more on show here that chronicles the history of Berlin from when the district was first settled up until the present day. Exhibits include the history of the theatre in Berlin and mechanical musical instruments that are played by musicians once a week – on Friday afternoons.