Oh, Paris and its parks. Seems there is always some magic everywhere. It must be difficult for Parisians or even tourists to choose their favorite one. I can say that were it up to me I would love to take a walk in a different park every day. This park is especially amazing as it was built in the 1990s on top of one of Paris’s main railway stations known as the Gare Montparnasse. Can you just imagine being in this elevated park which you can’t even see from street level. It is surrounded by high-rises on all sides. The reason it was named Jardin Atlantique is that the Montparnasse railway station is the starting point for the high-speed train called TGV-Atlantique which connects Paris with other cities located in Brittany and southwestern France. This park has been built on top of the older Montparnasse station’s railway tracks when a new more modern station was built. The creation of this park was a real challenge to architects as they had to find a way to hide a total of 130 air vents and find a way to grow grass and trees with little soil available. Some of the other important factors to consider were weight distribution and the fact that the high-rises surrounding this park offered only a certain amount of daylight. Jardin Atlantique sits atop of twelve pillars and seventeen meters above street level. 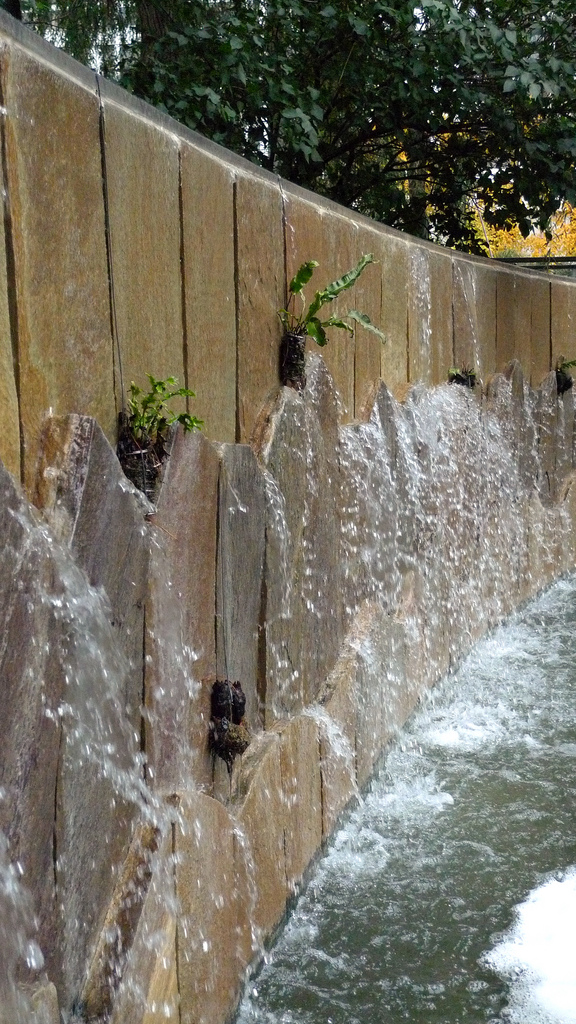 Jardin Atlantique can be a challenge to find since you can’t see it from street level. There are two elevators which can transport you up to the park however the easiest route is through the inside of the train station. Since the destination of the trains which leave the station at Montparnasse is the Atlantic coast then the Atlantic is the main theme of this park. Most everywhere you will notice wave-like patterns and lots of the plants in the park come from areas close to the Atlantic Ocean. It’s a delight to see that Jardin Atlantique even has sand dunes and waterfalls as well as a sun deck and a playground with an ocean theme. Right in the center of the park, you’ll discover what is known as”Ile des Hesperides” which simply means Island of the Hesperides. This is a most unusual kind of structure because it is a fountain which is also a weather station. It has a very large thermometer, a rain gauge, a wind vane and an instrument to measure wind speed. There are a series of gardens located on the east side of the park which have different types of vegetation:

Representing the Atlantic coast of Brittany there are many pine trees. You can also find two pavilions which allow visitors to climb upon the roof and look down over the Jardin Atlantique. At the northern end of Jardin Atlantique is a museum with a very long name – Memorial du Marechal Leclerc de Hauteclocque et de la Liberation de Paris – Musee Jean Moulin. Here visitors can learn about the history of the French resistance during WWII and the liberation of Paris.