You’ll find the Garten der Welt or Gardens of the World in Berlin, Germany. Visitors can enjoy such wonders as the Chinese Garden of the Recovered Moon, tropical Bali or take a walk from Italy to England all in one garden. At one time also known as the Marzahn Recreational Park, this garden was opened by the East Berlin city government in 1987 in order to commemorate the city’s 750th anniversary. As time went on many themed gardens were added like Japanese, Middle Eastern, Korean, Italian Renaissance and Christian-themed gardens.

The Chinese Garden of the Recovered Moon is Germany’s largest Chinese garden. It stands for the reunification of the city of Berlin. The moon is considered to be symbolic of the perfect harmony and unity of the world according to Chinese teaching. 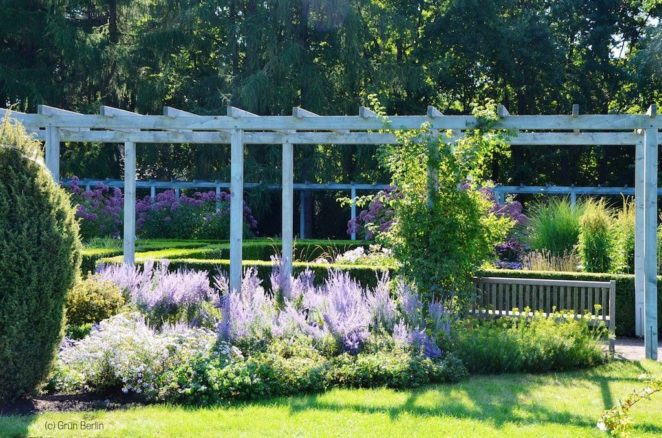 There are plants blooming year-round in the Karl-Foerster Perennial Garden.

Take relaxing walks in the idyllic green and colorful world of amazing plants, streams, and temples. Visitors also enjoy the maze garden and the hedge labyrinth.

This is the place where you can also try gastronomical delights like authentic Chinese, Japanese and Korean tea ceremonies in the tea houses. The reception hall in the Oriental Garden and the Stone Boat in the Chinese Garden are often booked for different events and weddings. Every spring the Gardens of the World host the Cherry Blossom Festival, the Chinese Moon Festival has sparkling lanterns in late summer and the Viva la Musica with concerts and fireworks. In 2017 for the International Garden Exhibition or IGA a modern open-air stage was built with seating for up to 5,000. Park employees offer guided tours. If you like you can take a birds-eye-view from up above on the IGA cableway. The Balinese Garden of Three Harmonies includes an energy-efficient tropics house. It is a particularly interesting place to see and a great place to be in the winter months. It has an amazing construction with 45 degrees C water flowing through the structure maintaining the temperature at 24 degrees C year-round.