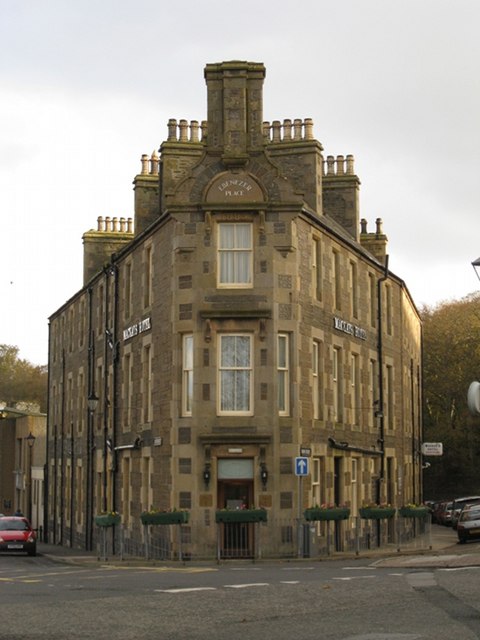 This photo (not taken by me) is of the world’s shortest named street, namely Ebenezer Place, Wick.

Wick is a town in the far north of Scotland, not far from the famed village of John O’ Groats from which walkers and cyclists set off on their 1000-mile (or thereabouts) journey to Land’s End in Cornwall. Wick is the closest you can get to John O’Groats by rail or air.

Indeed, if you feel like visiting Ebenezer Place, Wick Railway Station is a good place to start. A short walk takes you to a bridge over the river, but if you don’t go that way but look straight ahead across the small roundabout you will see wedge-shaped Mackays Hotel with its entrance facing you. If you cross the road and stand outside the entrance you are in Ebenezer Place. Take two more steps and you are no longer in Ebenezer Place but Union Street!

Ebenezer Place has been measured at 206 centimetres, or 81 inches. There are a few people who are tall enough to drink too much in the bar of Mackays Hotel, collapse in the street outside the door, and have the soles of their feet in River Street, the top of their head in Union Street, and the rest of them in Ebenezer Place!

So how did this situation come about? It is simply down to the strange shape of Mackays Hotel and the fact that the entrance is at the “sharp end” of the wedge. When the hotel was built in 1883 it was clear that its postal address could be neither River Street nor Union Street, so the name Ebenezer Place was invented by the town council for the sole purpose of allowing postmen to deliver mail through a door that was on a named street.

It should come as no surprise to learn that No 1 is the only address in Ebenezer Place, and it is still proudly borne by Mackays Hotel!