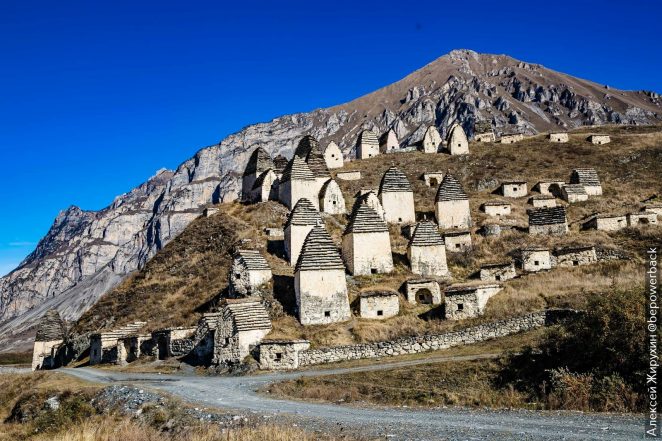 I think most anyone would be quite unsure about visiting a place that was known as the City of the Dead. There is an ancient village called Dargavs located in the Republic of North Ossetia-Alania in Russia.

This place has a wonderful history of death and remembrance. It is a journey that makes one reflect on life and on what happens when someone crosses over that threshold to the world beyond. The people who lived in the valley buried their loved ones in a cemetery, now ancient, along with all of their clothes and belongings as if they will need them in the next life. The valley stretches for 17 km and in the cemetery are around 100 ancient stone crypts.

The people who live in this area today say that this cemetery helps them to understand how people lived 400 years ago. It is also a fascinating place for archeologists to explore since certain items have been found which are of scientific interest. The place is surrounded by myths and legend and at one time it was believed that if anyone tried to get to the city they would never make it alive.

According to local legend, a plague swept through Ossetia in the 18th century. The clans living at that time built quarantine houses for their sick family members. Those who fell ill were provided with food but could not move about until finally, death took them. Unbelievable as it might seem the people who had no family just waited in the huge cemetery until death came.

Even though it is a difficult journey and a hard to find location some tourists from locations nearby and from all over the globe are interested in having a look at The City of the Dead. Perhaps with time tourism might be developed but the young generation in this area is not willing to stay and are attracted to the bright lights of cities far away. That is the way things just are. Russia can offer visitors a look at lots of unusual places but these kinds of historic sites just don’t attract too much interest or people don’t know how to develop the interest. It is thought that if someone would spend some time in North Ossetia with time they would be able to feel the ancient vibes around the city and the surrounding area.

When visitors finally get to the city at first they think that there are many small white houses but these are actually stone crypts. The oldest of them dates back to the 16th century. In the front of each crypt is a well that was used to tell if a person had made it to heaven. Visitors would drop a coin into the well and if the coin hit a stone at the bottom of the well, it was a good sign. For those who visit and are sensitive to the world beyond, I would not be surprised if they could see and feel a whole lot more.