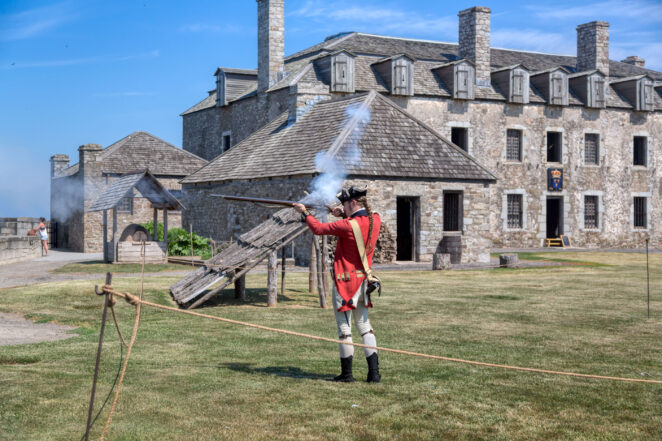 Here we are at Fort Niagara in Upstate NY North of Niagara Falls and Lewiston, New York. This is an ancient fort that overlooks the Niagara River and Great Lake Ontario and across the river the Canadian town of Niagara On The Lake with its Fort George.  The Old Fort Niagara was placed at a strategic site to protect the mouth of the Niagara River and the entrance to the Great Lake. The French made the first fort here, Fort Conti, in 1679. In 1727, the French made a more permanent fort and constructed the “French Castle” seen in the background here. Britain captured the fort from the French during the French & Indian War in 1759. The British held the fort during the American Revolution but were forced to give it to the United States in 1796. During the War of 1812, Britain again took control of the Fort and had to relinquish it again to the U.S. in 1815 after the two forts, Fort Niagara and Fort George had done battle.  The fort was used actively during the Civil War and WWI and WWII and was decommissioned in 1963. Here a Red Coated British trouper is seen firing a black powder flintlock rifle in a live demonstration at Fort Niagara.