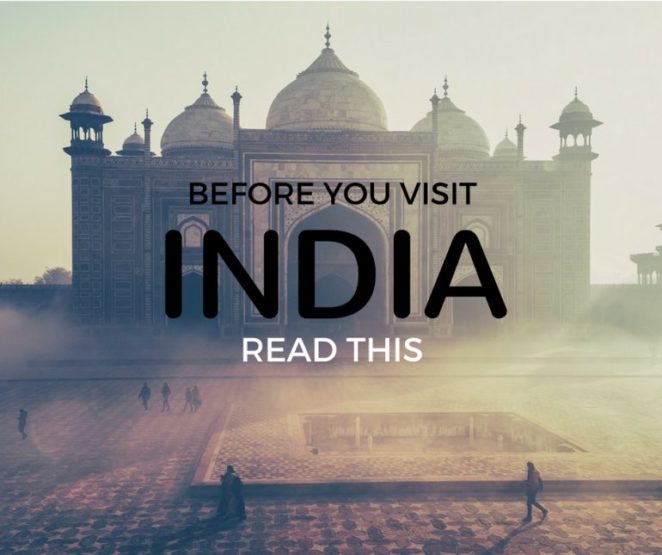 Are you visiting India? Whether it is first time, second or any time, you can face lots of things in India. Be careful and enjoy the trip. Read here about 15 things you should know before traveling to India.

1. Be patient when it comes to processing the visa

To enter India you need a visa. The best thing is to request the e-Visa online, for which you reserve yourself one afternoon for the enormous amount of questions that you will have to answer. Some of the things that they will ask you are the countries that you have visited the religion to which you belong or if you carry identifying marks visible on your body such as tattoos or moles.

At the airport, make as few transactions as possible. There the exchange rate is the worst in all of India, the SIM cards much more expensive than in the city and taxi drivers know that you do not know the price of the race. For this last management, in all airports and train stations there is a “pre-paid taxi” window. Use it, they will charge you as close to the actual price of the trip.

3. The Tuk-Tuks Will Be Part of Your Trip

The moto-taxis or tuk-tuks are part of the landscape and the best way to get to know the cities. The drivers will have no qualms about asking you an exorbitant amount for the race that they will obviously reduce, but with one condition: that before taking you to your destination you must go through your cousin’s gift shop. It is a trap, do not fall into it.

4. Ola Cabs Will Be Your Guardian Angel

Before going to India, download the Ola Cabs app, known as the “Uber India”. With this application you can request from luxury cars to tuk-tuks with the great advantage that you mark the price of the race before requesting the vehicle. One of the great moments that the tourists live is when a tuk-tuk asks for 200 rupees for a trip and you show him on the screen of Ola Cabs that the race is 50 rupees. “Ok, I’ll charge you 50 rupees, but first I’ll take you to my cousin’s store.” Do not fall! Request the tuk-tuk for the application and wait for it to arrive.

5. Prepare your ears for the beeps

India has an official soundtrack and they are not chords from a Bollywood movie, they are the whistles of the cars that you will hear permanently. There is no reason to whistle because it does not serve to lighten traffic, but assimilate as soon as possible that in the cities the schedule of the horns of horns is 24/7.

6. Internet Is Only On the Door Sticker

There will come a time when the body asks you to take refuge in those oasis of air conditioning and fast food called McDonalds, Domino’s, KFC … And you’ll want to connect to the internet to tell the world how beautiful India is and how much the cars whistle. «Do you have Internet? » «Yes». «Can you give me the password? », «Sorry, the internet does not work». Solution: buy a local SIM card if you want to have internet.

7. Everything Itches, Including What Is Not Spicy

There will come a time when you will not even bother saying “not spicy, please” when you order the food. Everything is there, including what they consider not. Get used to these flavors or you’ll be eating the whole trip eating white rice and fruit.

India is a reasonably safe country for women, but if they smoke or go in short suits they will be continuously looked at. In many temples, if you show arms or legs, they can deny you entrance. The advice that everyone will tell you if you are a woman is that you travel through India dressed in a sari.

10. Varanasi has its own rules

Varanasi is the city located on the banks of the Ganges. Its ceremonies, cremations and population given to the religion surprise everyone who visits it. Officially, nothing prevents you from moving or taking pictures, but when you appear with your Western appearance and your camera will start to appear people who will pose as authorities. If you are forbidden to take photos, comply with this rule, but if they ask you for money to see the rituals or cremations you can refuse. If you suddenly begin to tell the story of Hinduism as friends, then you will have to pay. Speaking in Varanasi about traditions with local people will cost you 100 rupees.

You cannot leave this country without traveling by train. The purchase of the ticket must be made online in the special websites for buying tickets in the best wagons. Trying to go to the station to buy the ticket at the window is an activity reserved for people like Bear Grylls of The Last Survivor.

It is very important that you select the category of your passage well because there is a lot of confusion. According to the logic, the Sleeper Class should be wagons with bed and air conditioning. Well, no, that category is the car seats where hundreds of people pile up. However Second & Third Class are the cabins with bed and air where you will want to travel. If you travel by luxury trains and book Palace on Wheels or Maharaja Express, you will not have any problem in your trip.

13. You will have diarrhea

The two most authentic western traveler experiences in India are traveling by train and having a diarrhea. Try to avoid that both events concur in the same space / time dimension. If you cannot avoid it, arm yourself with toilet paper and lots of mental strength. At that moment you will want to die, but after the trip it will become one of your best anecdotes.

Maybe one day you are walking through an Indian city and a person approaches you asking you to take a picture with you. In principle you do not have to worry. Think that you do the same thing many times with them because their appearance seems exotic to you. For an Indian, in addition, not only are you a striking person, that photo they want to show off to their people to have Western friends.

15. What To Do When A Child Asks For Alms

One of the most difficult times you will face in India is when children ask you for alms. They do not just ask for money: they follow you wherever you go, they grab your shirt and hit your arm insistently so you can give them something. Given this situation, it is normal to give them some coins or get angry with them as long as they stop bothering you. Well, those are the two things you should never do.

These children are exploited and instructed to behave in this way on the part of those responsible. With a child whose childhood has been stolen, the last thing we have to do is get angry, but neither should we give them money in any case. The day those children will stop taking money to their exploiters will not use them for that purpose and can devote to enjoy their childhood. Every time you give money or buy souvenirs to children you are contributing to their slavery.