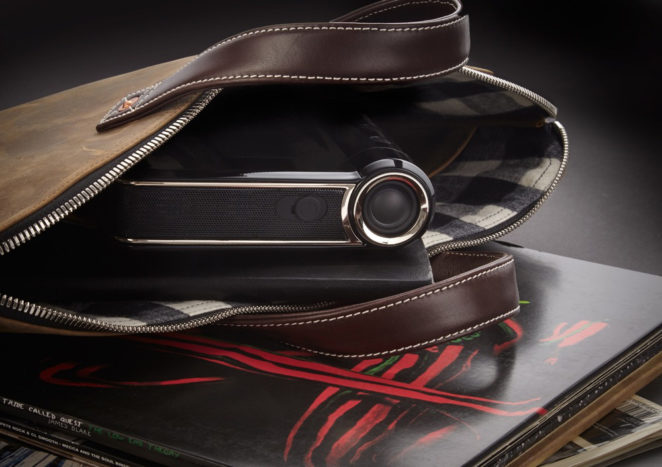 There are two things I have in my office that was given to me or inherited from my father that are not technology related. One is my father’s slide projection screen that he had in his office in Bloomington for many years. I have it hanging on the wall in my office and use it as a quick projection screen when I am evaluating the quality of small PICO system projects. ODIN was the first system I played with that I used dad’s old screen for that purpose.

The other item of my father’s that I have is a picture of my father and me many years ago. I do have other pictures hanging in my office. I also have some heavier items hanging on the wall as well. For heavier items, you want to make sure you have a stud supporting the item, so I use the Walabot to find the right place to place the nail. The Walabot system lets you see into walls and figure out what is behind that wall. I use it all the time!

The world of PICO projectors has changed radically over the past five years. Now the projectors have an integrated OS. Why would you care that your portable projector has an integrated OS? Because if you have a WIFI network, you can watch Amazon Instant Videos, Hulu, Crackle, Netflix and for that matter, any of the cable or Satellite TV providers broadcast anywhere you are. The convenience of entertainment, anywhere. Or connect your pc and share presentations with people, anywhere. The last one is the one I am most curious about. When I was little, I asked my grandmother why she liked watching musicals. I asked her the wrong way “why do you like this grandma; people don’t walk around singing.” I got a lecture on the fading American cinema scene and that I should welcome and appreciate musicals more. What I meant to say was its cool you like musicals grandma, they are a great escape. I put people doing spontaneous slide shows with a projector in the same category as musicals. Nice, fun spectacles, but other than Hollywood where would anyone do that?

Pardon me while I wander around my neighborhood sharing presentations with my neighbors. I don’t see any issue doing that do you?