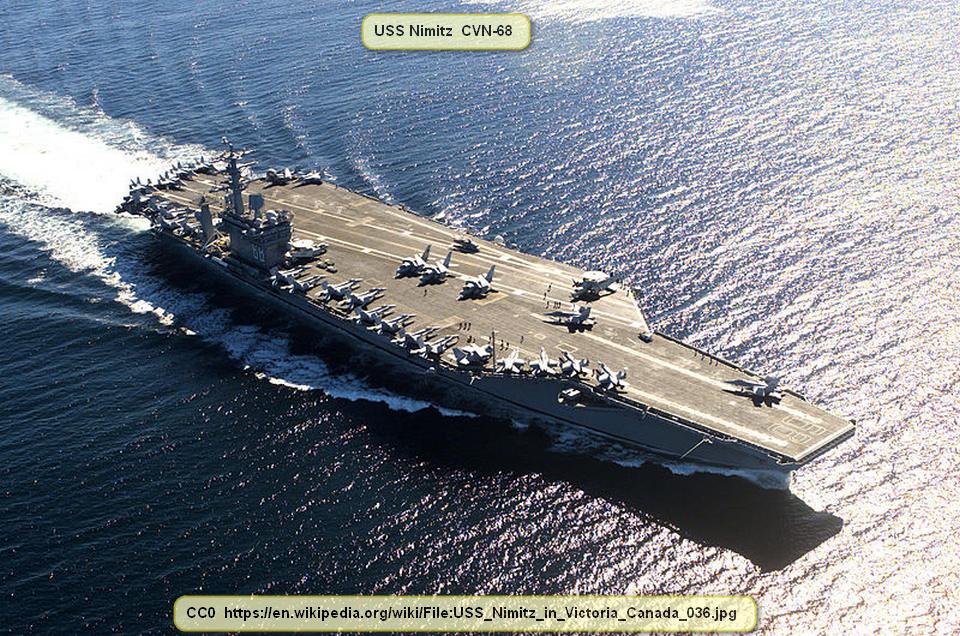 It usually doesn’t surprise people anywhere in the world that the United States has the largest and most heavily armed navy in the world. This isn’t a secret. The cornerstone of the US fleet is the Aircraft Carriers.

The US fleet has 20 active carriers. To get an idea of how big this number really is, other nations with aircraft carriers and the number they have are as follows:

This brings the world total to 42 aircraft carriers, and as mentioned, 20 of them are in the US fleet.

Most of the US carriers are currently Nimitz-class, named after a US Fleet Admiral. These ships are huge. They are 1,092 feet long; more than the length of 3 football fields arranged end to end. They are 252 feet wide and they weigh around 100,000 tons.

These ships use nuclear reactors as a power source. Besides providing power to other systems on the ships, the reactors drive four propeller shafts and the ships can sustain a speed of 30 knots (over 35 miles per hour). They also don’t need to be refueled for 20 years.

There are usually around 90 aircraft onboard. This includes fighters and helicopters. The carriers are also well armed, with missiles and torpedos.

Nimitz-class carriers are designed to carry a standard ship’s crew of 3,200 plus over 2,400 pilots and air support personnel. This means that the total number of crew on one of these carriers is more than the number of people in a small city. Interestingly, carriers also have movie theaters, bowling alleys, stores, and some of the other conveniences that might be found in a city.

Much more than a warship 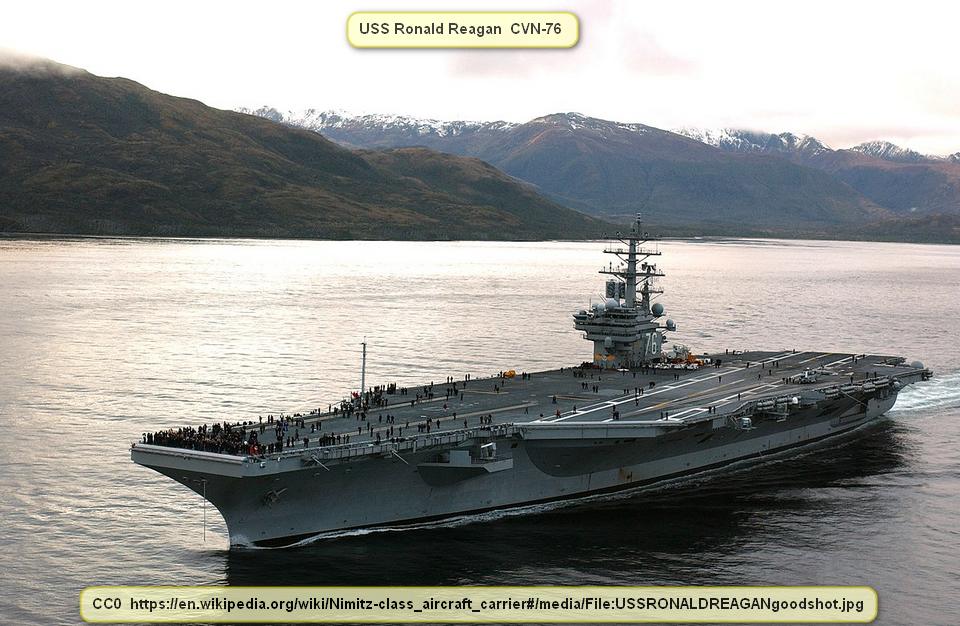 What many people still don’t realize is how much humanitarian aid is given by US aircraft carriers. When natural disasters strike other nations, it is most often a US aircraft carrier that provides the major assistance for the people in that country.

This assistance has been given in the aftermath of tsunamis, earthquakes, droughts, and typhoons. The number of places carriers have given aid is also staggering; the Philippines, Japan, Haiti, and Greece to name just a few. There are many more.

A Nimitz-class carrier has a fully stocked medical unit that would be the envy of many hospitals. In normal operations, they can handle 150 hospitalizations, they have an intensive care unit, they can handle surgeries, and in fact, they have surgeons, anesthesiologists, physical therapists, psychologists, nurses, and corpsmen on staff. Additional medical personnel can be supplied, too. Carriers additionally have dental clinics that are capable of seeing to the needs of 70 patients per day.

Each of these carriers can supply far more electrical power than the ship needs, so this also can be used in times of emergency and often is.

Carriers normally carry enough supplies for the entire crew for three months, however, they can be loaded with extra supplies during times of emergency. This includes blankets, tarps, medical supplies, food, hygiene items, clothing, and a great deal more. Helicopters often deploy these supplies to areas that can’t be reached overland, in times of crisis.

Aircraft carriers have desalinization plants aboard that have a capacity of producing over 400,000 gallons per day of fresh water out of ocean water. This can be vital when disasters of any sort occur.

In fact, the food services on a carrier are able to serve 20,000 hot meals per day, too.

The number of lives that have been saved through the humanitarian efforts of the aircraft carrier fleet is so large that it honestly can’t be calculated. This aid is also often bolstered by support craft of various sorts.

One of the most absurd things I heard immediately after a Nimitz-class carrier was deployed to the Philippines after it had been devastated by a typhoon was that it was a prelude to invasion. This ‘guess’ was totally off-base and it was sadly made as a commentary by a major news outlet. Aside from the fact that the Philippines is an ally of the US and is a US protectorate, which means that an invasion would be the last thing the US would want to do, it doesn’t take a lot of knowledge regarding the capacity of aircraft carriers in order to understand the purpose. The carrier was there to render aid, to carry supplies, to provide electricity, food, supplies, and drinking water, and it served as a floating hospital. Helicopters were almost in constant operation, getting supplies and rescue personnel to villages that had been cut off from help. The death toll from that typhoon was great, but there is no doubt at all that it would have been many times worse, had the carrier not been sent.

Carriers even give humanitarian aid to the people of countries that are currently hostile to the US, when disaster strikes. Naturally, truthful reporting about this would paint the US military in a very positive light and would also explain where billions of dollars of the US military budget goes to, so recently, the media doesn’t usually report on it at all or just gives it passing mention.

US aircraft carriers are the cornerstone of the US naval power. As importantly, they are an enormous aid around the world when natural disasters strike.