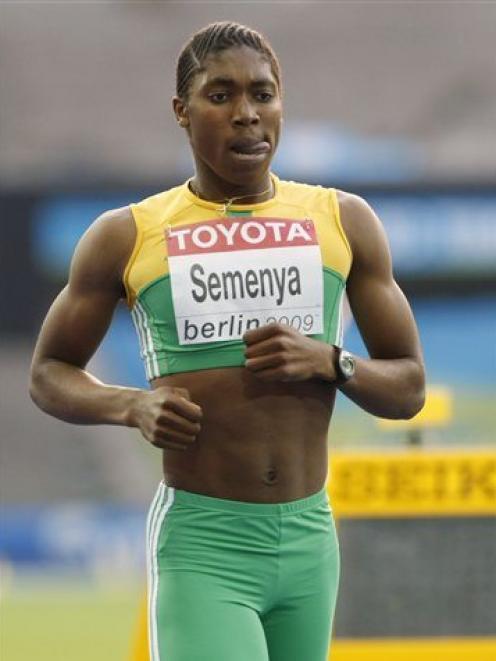 Caster Semenya is in the news again. She/he is the women’s 800m Olympic champion who is 70% male but chose to be a woman as she is a hermaphrodite. She has no women’s reproductive organs but the sex organ ambiguity allowed her to identify as woman. It was at a young age she did this so not cynical to be a good athlete but became so when she chose to race women with a man’s body. Not surprisingly she won everything and finally ran into trouble at 16 when she was drug tested under women’s testosterone level rules. Needless to say she was off the scale.  Even today it’s proving hard to ban her as an increasing number of female athletes speak out against her and others like her creating an unfair playing field in women’s sport. The rules on transgender (which she isn’t) is that women that become men can race in the male categories but men that become women can’t race in women’s races.

As she began winning championships that would allow her to race on the international circuit it was clear she would win everything if she didn’t have treatment to lower her testosterone levels so to compete fairly.  When she won the 2008 World Championship questions were asked about her sex and she had to have the controversial gender test. Results were leaked and she was classed as intersex. She was banned for racing for one year before the lawyers overturned it by playing the expected race card, ironic as it was other female Africans losing out on medals because of her racing.

Back racing in 2011 she was clearly affected by the mess and under-performing to not gather attention. Ironically she became Olympic Champion in London after four Russian women runners were DSQ, one for having high levels of testosterone, gold medalist Savinova stripped of her gold and given to silver medalist Semenya. The IAAF folded again by failing to ban another intersex athlete and decided testosterone had no real effect on women’s performance, which is bizarre and untrue. The lawyers had won the day on discrimination rules and now the sport wide open to cheating through female and male athletes abusing testosterone, resulting in the 2016 Olympics having three intersex medalists on the podium for the 800m, Caster the champion.

In 2018 IAAF President Seb Coe banned high testosterone levels in female athletes in a bid to stem intersex athletes dominating in the future, quite literally not a pretty sight. As the ban was for athletes running 400, 800, and 1500m it was thought the ban was to target Semenyna. My problem is they should never have let her run as a woman in the first place and she should never have tried. Although her tests were kept secret she has no ladies bits, no breasts and has men’s muscles. In fact I’m not sure if any of her is female. Again the lawyers are contesting the decision. In 2017 she became the first South African to win the national championships at 400m, 800m, 1500m and one lap relay. Nobody has won that combination before in any event since the state doping era of communist Eastern Europe.