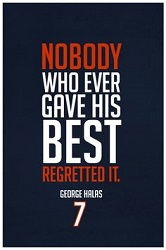 I never heard of the name of the former Chicago Bears football coach or any of his motivational quotes that gave him the nickname Papa Bear since the George Halas is one of the founding fathers of the National Football League.

I only remember the motivational quote from the former head coach of the Green Bay Packers and the Washington Redskins the late Vince T. Lombardi who is famous for his quote “Winning is not everything, it is the only thing.”

What I read that quote from the late Vince Lombardi it shook me out of my feet since his words had power even after when he passed away from cancer in 1970.

One day I was looking for motivational quotes from Brainy Quote.com and when I ran across the famous quote from the late Papa Bear, it gave me a great wake up call.

It makes me that laugh that when one or more persons criticize a sports star or team for finishing in second place in a championship contest, the sports critic on television or radio who has never played a game in the professional ranks has the gall to call the losing team as chokers or losers.

A message to the sports critics, maybe you should read the quote from the late George Halas before you start to insult the team or sports star that did not win the championship trophy. If the sports star or team gave it all that they had on the field and fell short, there is always the rule of going back to the drawing board and make some adjustments for the next sports season.