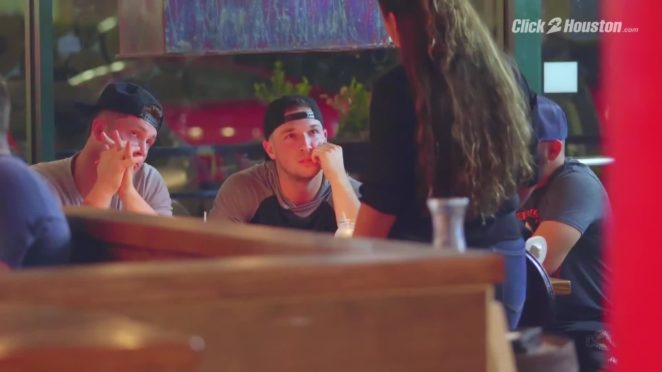 Houston Astros third baseman Alex Bregman is doing his part to give back to the citizens of the Houston Texas region by first opening a You Tube channel where his fans get to know him better when he is not playing baseball.

I am sure that when Alex started to share his off the field work during the off season, he does not do it to gain some free good publicity by showing his fans that he cares for the people in the Houston area who pay his salary what critics call “Grown men playing a kids game.”

Last week Alex and a few of his friends went to The Moonshiners restaurant, he asked the manager of the restaurant if anyone needed some money due to the circumstances out of their control as he and his friends sat down at a table.

The manager of the restaurant mentioned to Alex that a waitress named Jordan Thompson had the misfortune of having someone broke into her auto earlier that same morning.

It seems to be a trend that a person who has wealth will videotape an act of buying a drink then tip the waiter or waitress a huge tip for their outstanding service.

When Alex finished his iced tea and water, he left Jordan a tip of $500 dollars as his way of assisting her overcome her money problem of how to repair the damage to her auto that was broken into that same day.

To put it mildly, Jordan cried tears of joy when she received the tip from the Astros third baseman who is a regional baseball star doing his part to follow the principal of being a cheerful giver to people in need without making a huge deal to impress other people what a good person they are.