In comparison to my previous yearly writings about the Ohio State Buckeyes versus Michigan showdown, aka ‘The Game’ where I wrote about their previous match-ups in the past, plus how their season has went, I would like to do something different this year. I’am always one that loves hearing others input on many things because it gives me a different outlook on something that I may miss, outside of my own personal opinion. So with that being said, this year I asked five others can they see Michigan ruining Ohio States College football playoff chances, as well as their perfect season. And these are the responses I got from the five Quora users I asked.

Working from there, Michigan is at a huge disadvantage as Harbaugh is a coaching liability. He makes poor down and distance decisions, and he can’t make half time adjustments. So far this year, he’s had the physical advantage over the teams he beat, period.

It this year’s match up, you have an OSU team, that is big, fast, and talented. Unless Michigan gets fortunate in the turnover area, while Harbaugh Is rendered incapacitated, it will be a physical ass whipping. Michigan can’t match up talent and coaching wise.

So this is really a matchup of a good Michigan team, vs a juggernaut. Can the wolverines win? Sure. Would I take them and the points? Hell no.”

Nick Davis, lives in Michigan – “I can certainly see it. Michigan has one of the best defenses in the nation and their offense has come alive against some quality opponents since their loss at Penn State. Since that point they’ve blown every team out. Additionally, ohio is coming off a close, emotional win against PSU. It is hard to win a game like and then win another tough away game against your hated rival when you have all the pressure in the world on you and they have none. All that said, UofM will have to play their best game of the season, cause multiple turnovers and not turn it over themselves at all if they want a shot at winning a close game. I don’t see ohio winning a close game. Either Michigan will win a close game, or ohio will blow them out.”

Perry Sams, B.Science Journalism, Arizona State University (1980) – “Michigan, oh Michigan. Yon state of many people, herbs, cereals, many lakes, of Ring Lardner, who I see was from Niles—- Niles across the state line from Notre Dame town where I grew up, where people aren’t afraid to eat a peach, home grown, or to root for Wolverine, plural.

Prediction. It would be a Marvel, a comic surprise, with two brothers Harbaugh being bigger heroes than Hugh Jackman for once, if Michigan could win. Because I hear on the radio Ohio State has won is it four? In a row.

Those are long odds to face. But seriously, I think they have as valid a chance as any year of an upset. It would be cinematic. It would be Han and Leia riding off into the stars. Because if Ohio State lost, it is potentially a loss to keep O State from the football playoffs this year. And that’s all I can figger out from my sporadic interest this year.”

Archie Carroll, former Professor Emeritus of Management at University of Georgia (1972-2012) – “20% of me sees Michigan winning: the other 80% sees Ohio State winning.”

Jerry Miller, Ph.D., Senior Lecturer at University of Michigan (1975-present) – “Yes. I live 1 mile from the Big House and I will be there to see it happen. The Wolverines are peaking at the right time, there will be a raucous home crowd and OSU is still over-rated. We are ready to see the upset.” 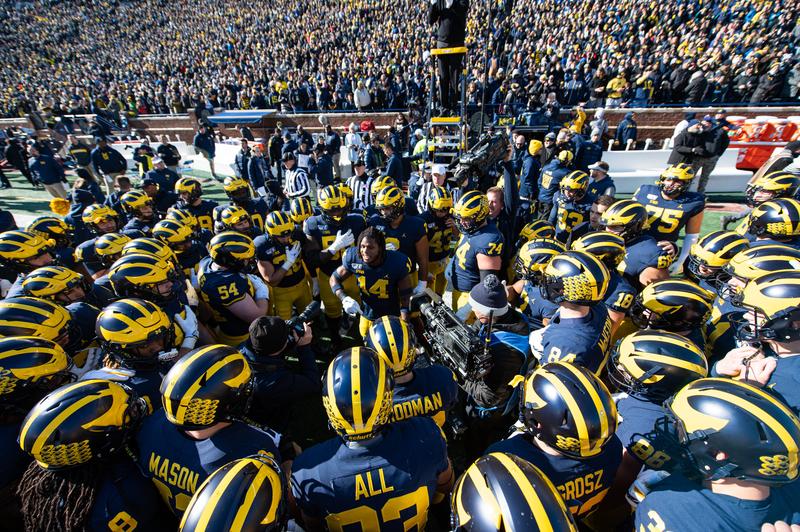