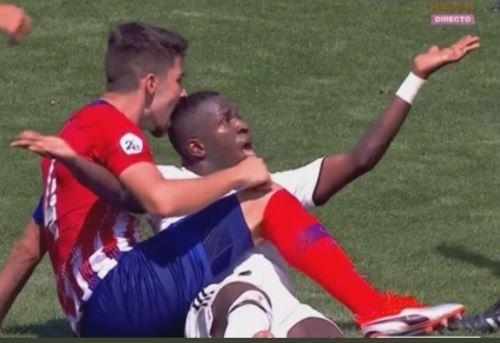 Brazilian striker Vinícius Júnior of Real Madrid Castilla CF has suffered a bite in the head, given by a rival footballer during the derby disputed this Sunday against Atletico Madrid B (2-2).

When playing 35 minutes of the second part of the game, of the Second Division B of Spanish football, Vinícius and the captain of the ‘Atleti’ youth, Tachi, were left on the lawn after an action, where the football player ‘colchonero’ bit him head .

In an unusual decision, the referee awarded a yellow to the young promise of Real Madrid and then the captain of Atletico B.

The action of Tachi recalls the bite of Uruguayan striker Luis Suarez , promoted by Italian Giorgio Chiellini at the 2014 Brazil World Cup. This move caused FIFA to impose Suárez a penalty of 9 matches with his team, and 4 months without playing with any club or access the stadiums.