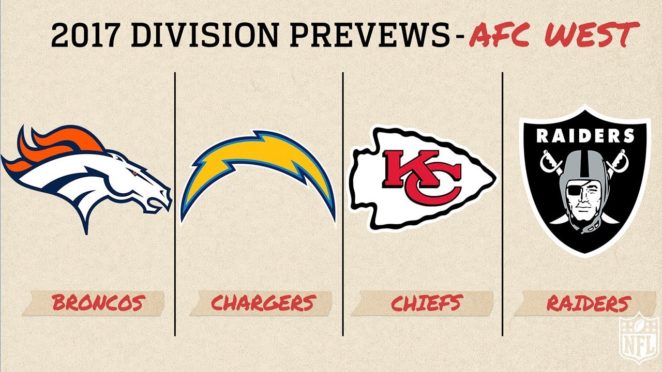 Last season, the race to win the AFC West Division came down to the final week as the Kansas City Chiefs won the tiebreaker over the Oakland Raiders as both teams went 12-4. Which teams will take it to the wire this season?  Let’s find out.

1. Oakland Raiders. If QB Derek Carr would not have broken his leg at the end of the season, then the Raiders would have won the division last season.  This season, the line will look to keep Carr upright after having a breakthrough season.  Plus, he will also be handing off to new RB Marshawn Lynch, who came out of retirement after sitting out a year.  Having a second-place schedule instead of a first-place schedule will also allow for the Raiders to navigate through the season with less difficulty.

2. Denver Broncos.  The Broncos will look to bounce back after missing the playoffs last season.  The defense remains as stout as ever.  The difference this season will be that QB Trevor Siemian should be more consistent after throwing ten interceptions last season.  If the Broncos can keep the turnovers down, then they should be able to climb in the standings.

3. Kansas City Chiefs.  The Chiefs were dealt a serious blow when starting RB Spencer Ware suffered a season-ending injury.  Insecurity in the rushing game will cause for the West Coast offense the Chiefs employ to be less effective.  The defense will be tired by the bye week due to being out on the field for too many possessions.

4. Los Angeles Chargers. The Chargers were hit with the injury bug last season as twenty players ended up on injured reserve.  Also, the injury bug already hit their first-round draft pick WR Mike Williams because Williams is starting the season on the Physically Unable to Perform (PUP) list due to an injured back.  Having to switch to a new city and to a new coach will take a mental toll on this team for the entire season.

All stats are from Wikipedia.org.

Let me know what you think in the comments below.