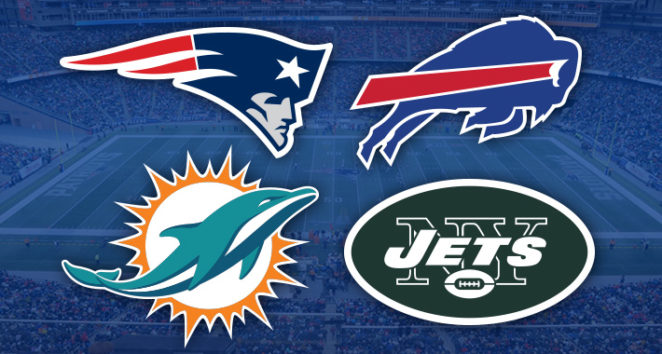 The New England Patriots have won the AFC East Division Championship for the past eight years?  Will they be able to make it nine or will the other three teams step up to topple the Patriots?

1. New England Patriots.  As you can see with this first-place spot I’m giving to the Patriots, I believe that New England will continue its reign of the AFC East Division.  Although WR Julian Edelman is out for the season with a torn ACL, the Patriots added WR Brandin Cooks to the roster.  After pulling off the biggest comeback in NFL history, the Patriots continue to have the upper hand over their opponents.

2. Buffalo Bills.  Last season, the Buffalo Bills appeared to be headed to the AFC playoffs, but they sputtered at the end by losing four of their last five games.  This season, the Bills should be more consistent with more of a priority to get RB LeSean McCoy as many touches as possible and with a very stout defense.

3. New York Jets.  An under-rated running game along with better defensive play should surprisingly keep the Jets out of the AFC East cellar.  Many experts are picking the Jets to end up in last place due to a complete offensive overhaul, but there should be less game-killing turnovers this season.  The Jets defense should keep them in plenty of games this season.

4. Miami Dolphins.  After losing QB Ryan Tannehill for the entire season with a leg injury, the Dolphins decided to pluck Jay Cutler out of retirement.  Uh-oh!  Do you know that Cutler has not played a full season since 2009?  Do you know that in his best statistical season with Chicago, the Bears went 6-10?  Dolphins fans, this year will be an absolute mulligan for you.

Let me know if you agree or disagree in the comments below.

All stats are from Wikipedia.org.