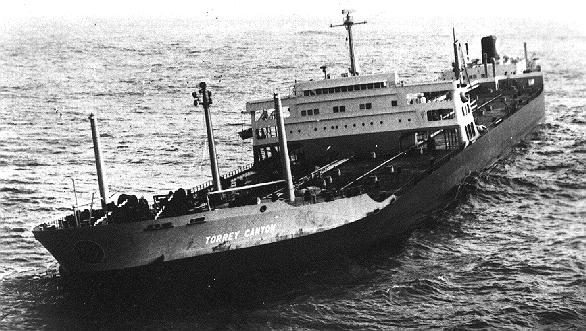 The wreck of the Torrey Canyon on 18th March 1967, off the coastof Cornwall, brought home to the British public the risks that are involved in the transport of huge quantities of oil by sea in giant supertankers.

Although the Torrey Canyon, at 120,000 tonnes capacity, was one of the largest crude oil carriers afloat at the time, it would be dwarfed by some of the monsters around today. Nonetheless, in 1967 it was the largest ship ever to be wrecked, and the loss of its cargo led to a serious environmental disaster that stretched the resources of the UK authorities and gave rise to lessons that have proved beneficial in later similar incidents.

Fully laden, the Torrey Canyon had set sail from Kuwait on 19th February, her destination being the massive oil refinery at Milford Haven, South Wales. However, a navigational error (not helped by the ship’s cook being the man on watch at the time) led to her running aground on the Seven Stones Reef, ten miles to the north-east of the Scilly Isles. Attempts to refloat the ship failed, and a member of the Dutch salvage team that made the attempt was killed.

Dealing with the cargo

With the oil tanks ruptured, huge amounts of oil began to pour into the sea and a major pollution threat was unleashed. Not only was wildlife at risk, so were the valuable fisheries of the area and the tourist beaches of Cornwall (and, as it turned out, Brittany in France and Guernsey in the Channel Islands)

Great Britain was unprepared for such an event and plans to counter such a threat were rudimentary. The first idea was to use huge quantities of detergent to break up the oil. Some 10,000 tons were sprayed from Royal Navy vessels and more were used on the coast when the oil slick reached land. They were clearly ineffective in containing the spillage and their toxic effects proved to be just as harmful to marine life as the oil.

As more tanks ruptured and the spill increased in volume, the decision was taken to use the Royal Air Force to bomb the ship with a view to setting fire to the oil before it could leak out. In all, 62,000 pounds of bombs were dropped, plus thousands of gallons of petrol that it was hoped would be ignited by the bombs. Napalm was also used. However, when fires were started they were soon put out as the sea washed over the wreck. Many of the bombs missed their target and those that did hit the ship had the effect of sinking it, thus taking the remaining oil below the surface where it was out of reach but still liable to leak as the ship broke up.

The effect on Cornwall

Nothing could stop much of the oil reaching the coast of Cornwall a few days later, and that of Guernsey (the most westerly of the Channel Islands) 19 days after the wreck. In Cornwall, the cliffs and beaches affected by the oil turned black and up to 25,000 seabirds perished. The smell of the oil drifted inland until it was noticeable far inland throughout the county.

As mentioned above, the use of chemical detergents to clean the beaches was widespread but unwise. The Cornish coast is subject to storms and high seas that constantly batter the rocks and beaches, and six months after the spill many of the places that had not been treated were clear of oil. However, the treated beaches had become a disaster area of their own, with all signs of life wiped out.

The effect on Guernsey

On Guernsey, where tourism is the major industry, efforts to clean the beaches were given the highest priority. Teams of people scraped up the oil which was then dumped in a disused quarry. This saved the beaches but created another pollution hazard in the quarry, which could not be dredged clear because of the presence of unexploded World War II bombs. Much of the oil is still there, although modern methods that use oil-eating bacteria are currently proving effective.

Divers to the wreck of the Torrey Canyon 44 years later reported that there was no sign of the oil and that marine life in the vicinity had returned to normal.

Many lessons were learned from the Torrey Canyon incident, not least concerning the proper course to follow in such events. Panic measures are clearly not the answer, neither is the use of toxic industrial-strength detergents that do more harm than good. Appreciating the risks posed by supertankers, which must approach British shores in order to discharge their cargoes and therefore be subject to the forces of nature, the government now has proper plans in place to deal with any future emergency of this kind.

Likewise, progress has been made on devising methods that avoid the worst environmental consequences when major oil spills occur. Of these, the most hopeful involve the use of biological remedies, as mentioned above in the Guernsey context, and the ability of natural forces to provide their own clean-up operations.

Although the Torrey Canyon wreck was indeed a pollution disaster, it did have some positive outcomes that have proved helpful down to the present day.