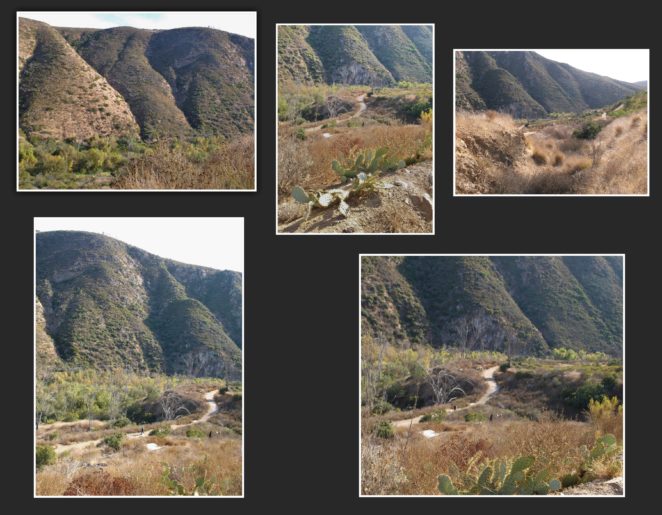 In our North County San Diego’s town of Escondido, land was sold around the turn of the century but the land had no water which kept the town from growing for years.

In 1916 the San Dieguito River flooded and destroyed agricultural land owned by the Santa Fe Railroad. To restore the company’s land values W. E. Hodges supported local developer Col. Ed Fletcher’s ambition to build a dam that could provide water for the community.

Anyway, I tried to get there.. Tried being the operative word here.

This is my walk. I took my dog and son along on this short hike. I mean very short!!! You will see why if you continue to read….

The dam and trail. This used to be open to the public, but after a wildfire devastated the area they closed it down for good. Photographers brain… Keep out sign? I must enter!! 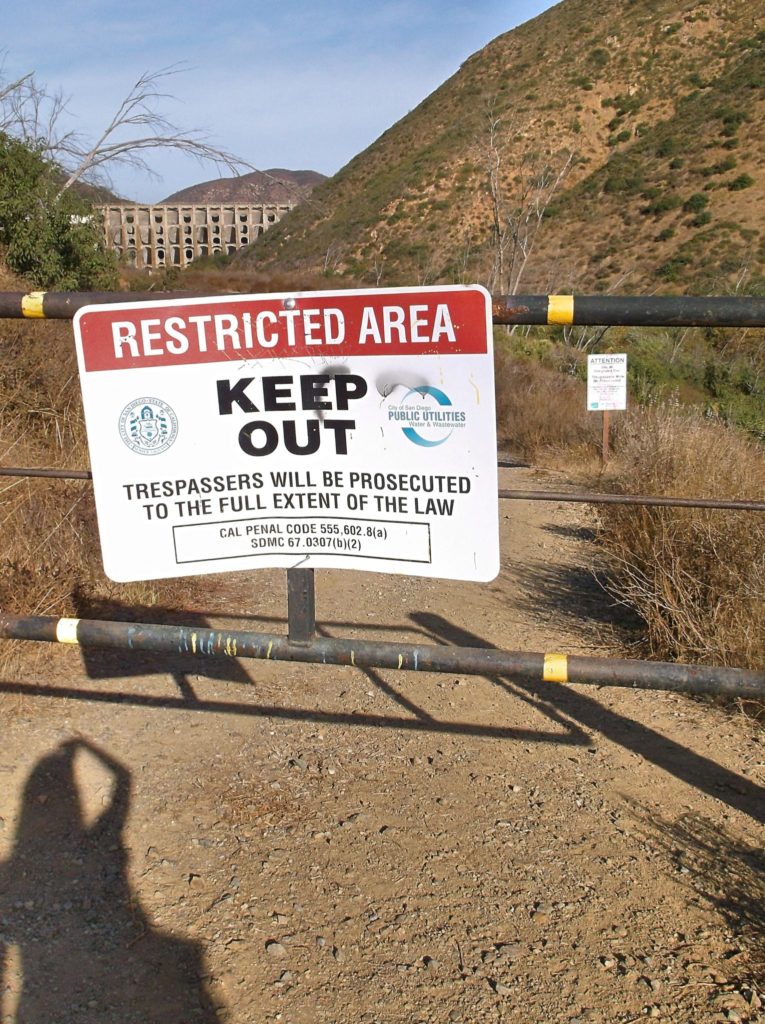 Notice the white plaque mid frame one the left? There is information about the dam here, which I touched on above. 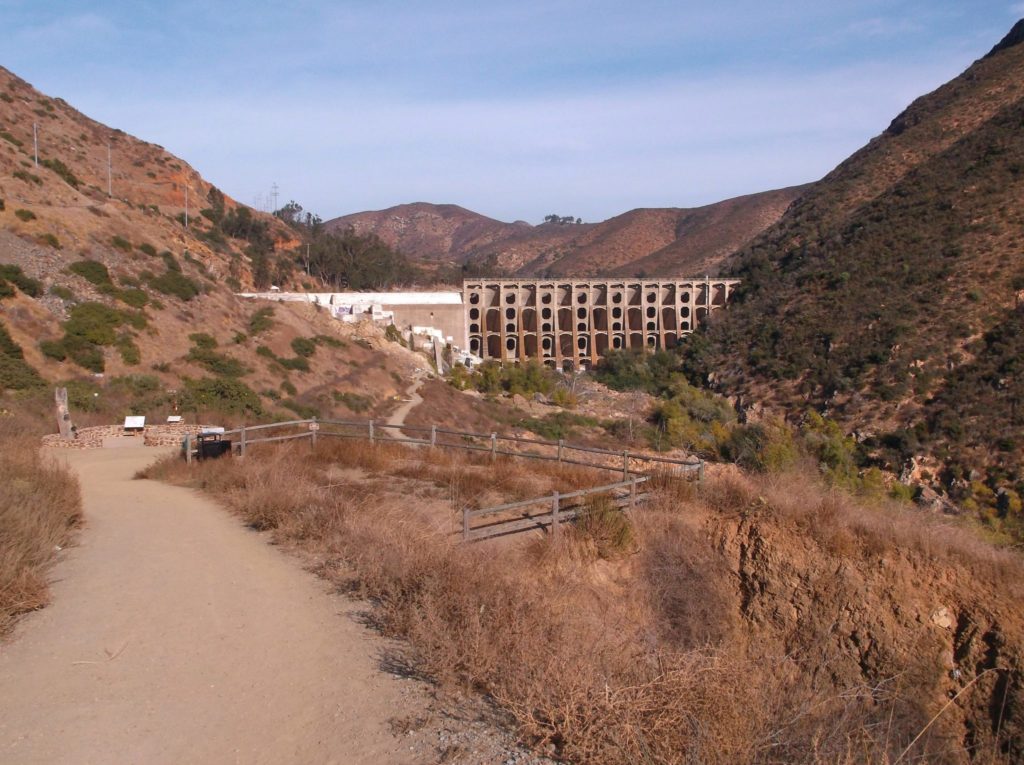 I was told by a friend and professional photographer to always turn around when you are on a photo walk, there is always a photo opportunity behind you as well as ahead.

So I turned around and clicked this one. 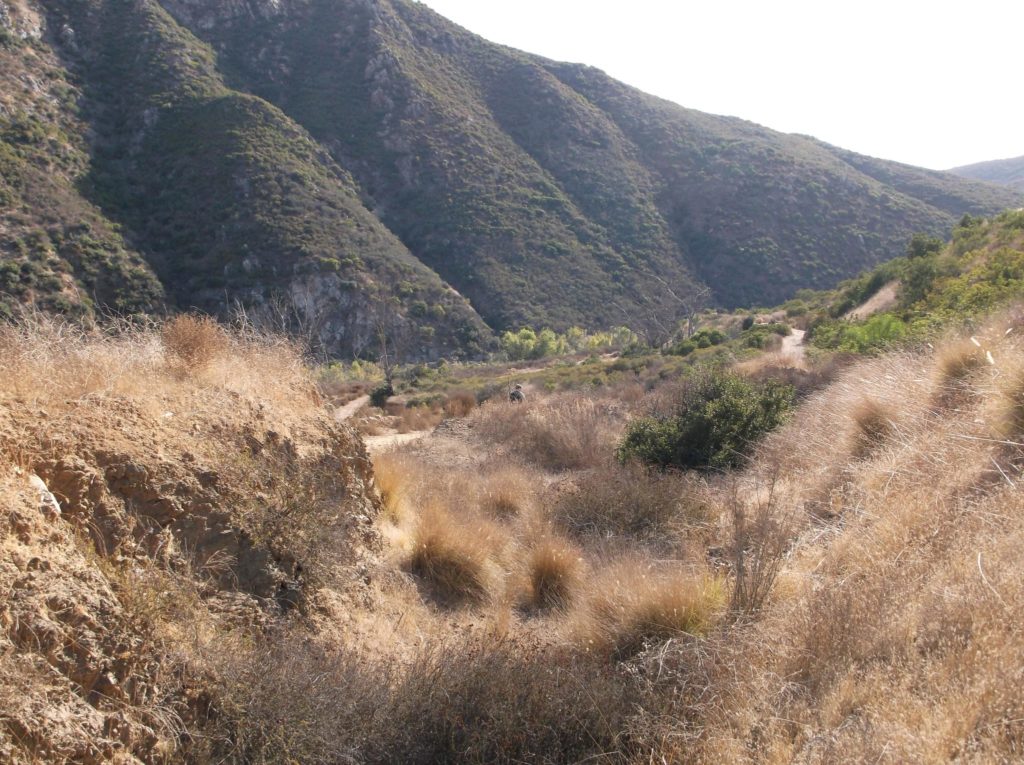 I made it to that plaque I mentioned earlier. There was this.

Here is the plaque: and it really worked well. I found all three points of interest. 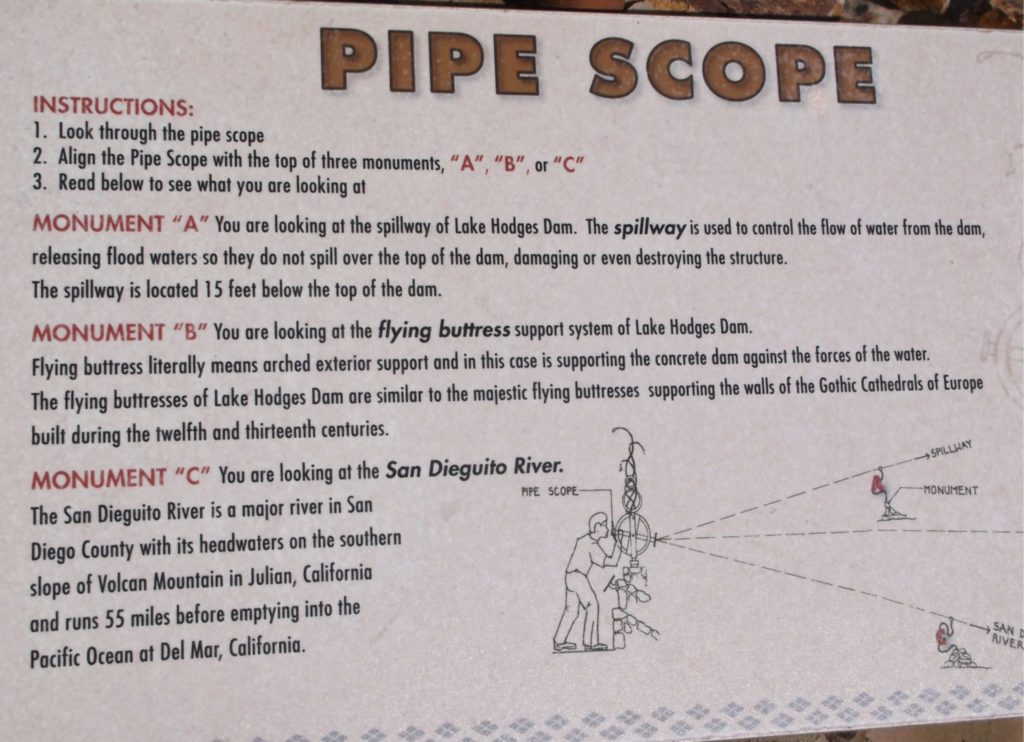 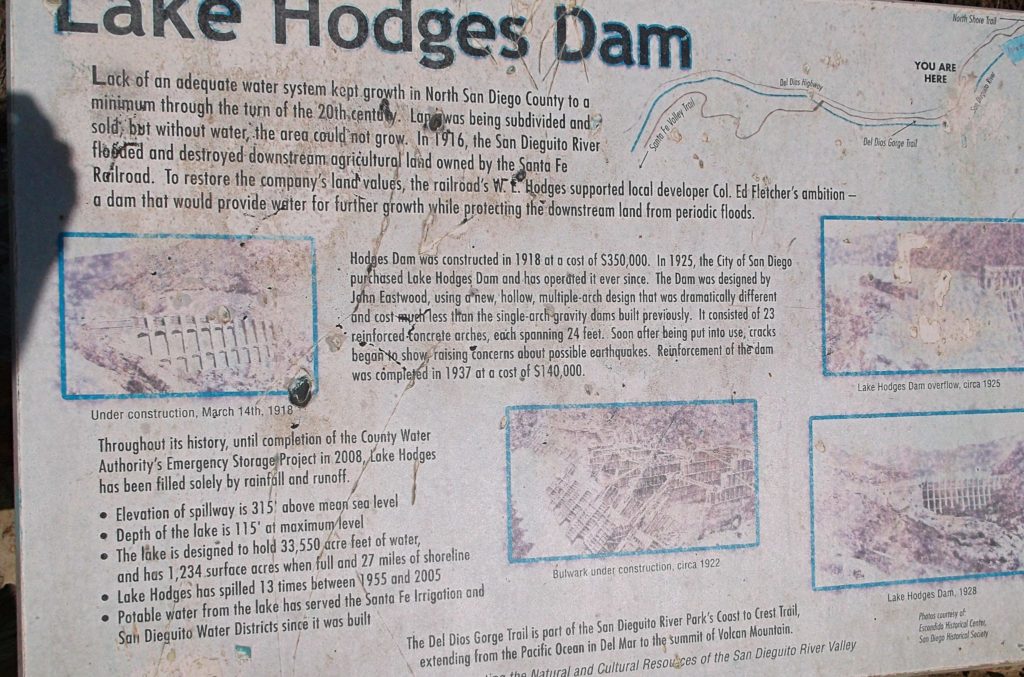 I mentioned the fire.. This is a Black Oak Tree that died during the fire. 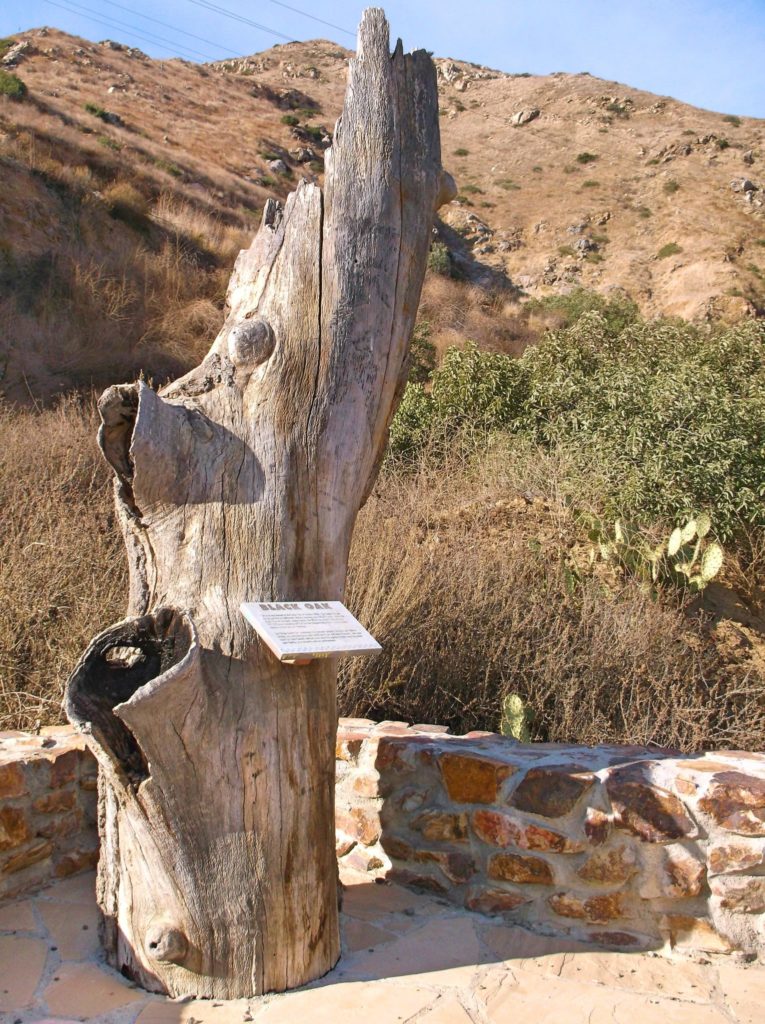 The sign below it read: This tree was burned in the Cedar Fire of October 2003. The Cedar Fire was the largest fir in California’s history, burning over 280,278 acres. While the Cedar Fire hit the back country worse, The Witch Fire of 2007 burned over 197,990 acres including 62% if the San Dieguito River Park, including the location where you are standing.

San Diego County fire awareness is a constant concern. Drought and climate change are contributing to make wildfires larger and more frequent. Join your local Fire Safe Council, and see your local fire agency to learn ways to protect your family, your property and our environment. 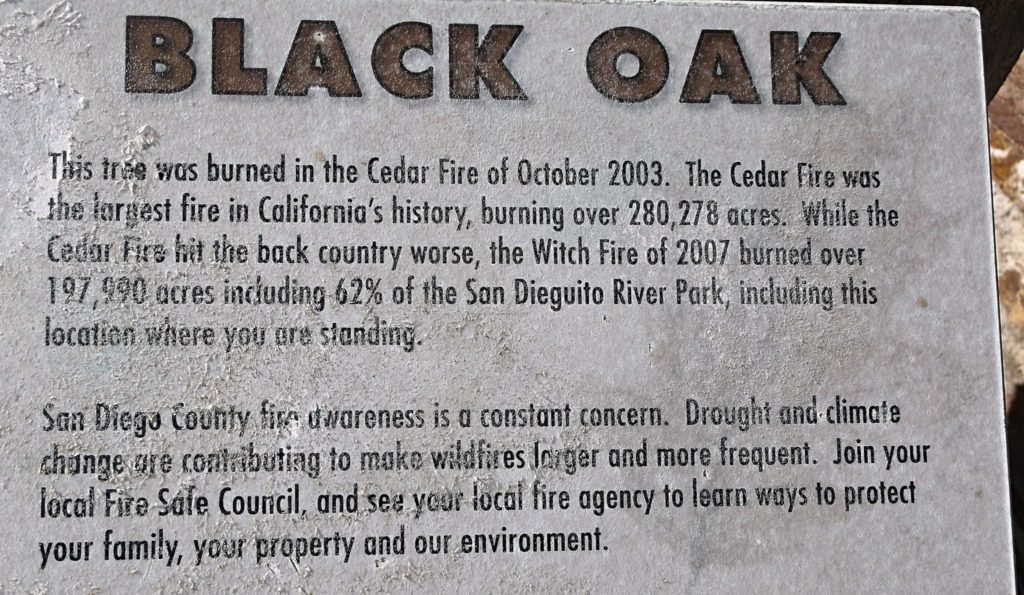 This was indeed a very sad time.

The trail was a switchback trail, it zigzagged down to the canyon, this was my view from above the second to the last Z. 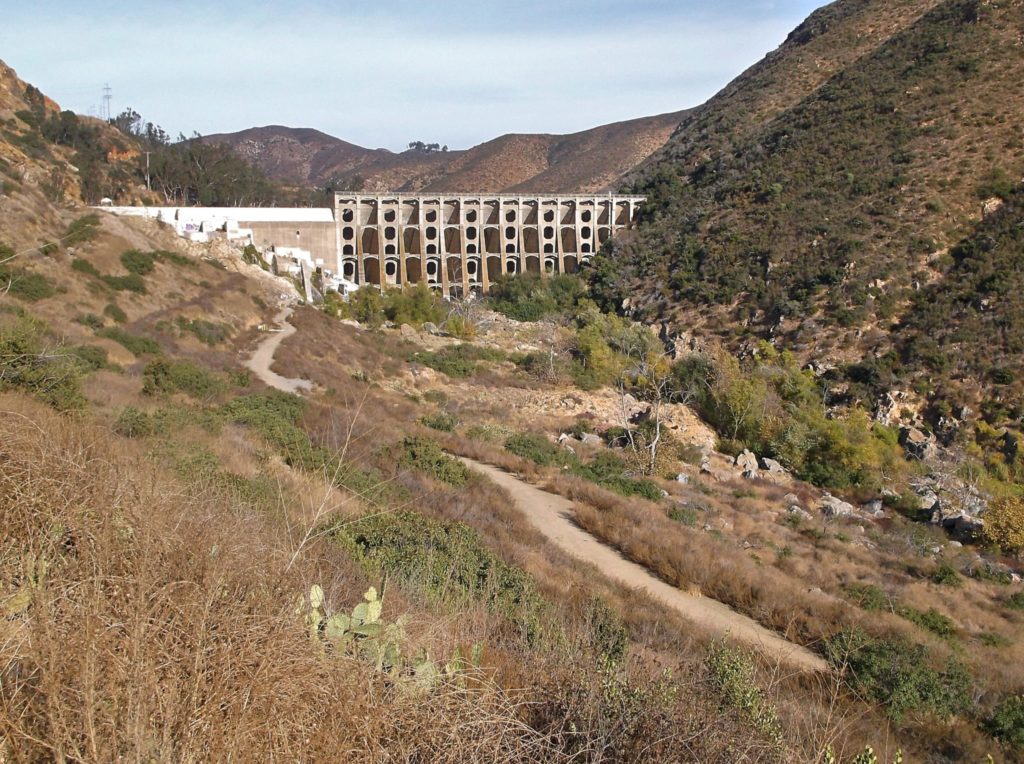 That hill that rises to the right of the frame is here.

Another collage that shows my son below.. 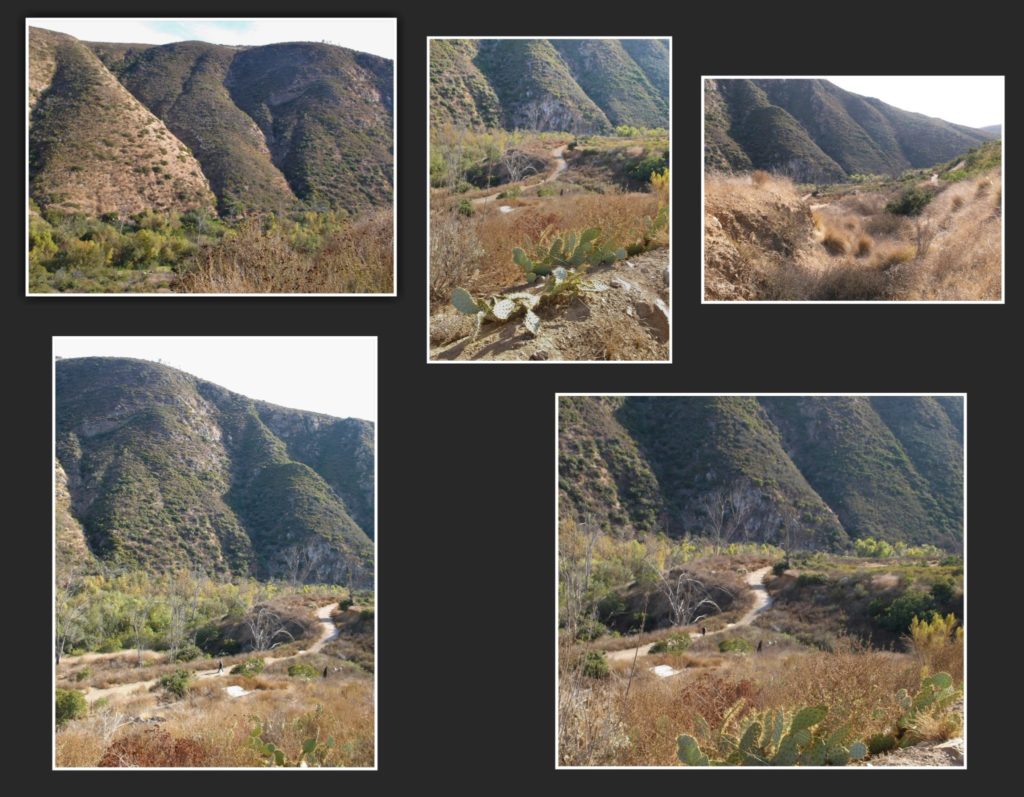 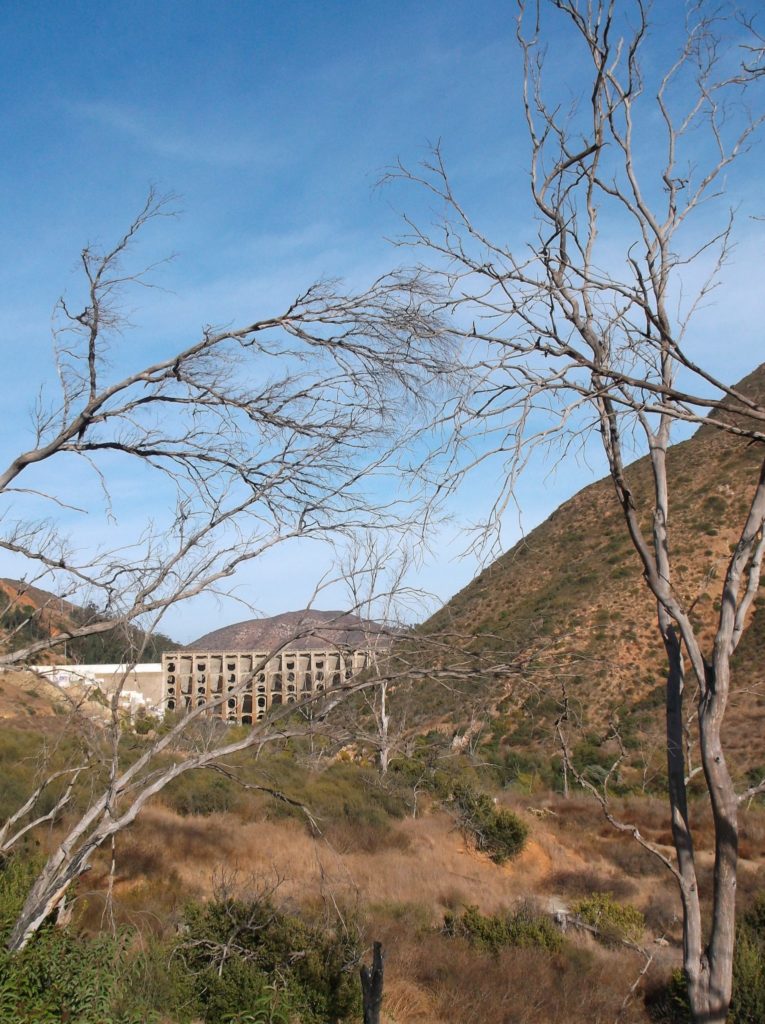 A line of them… 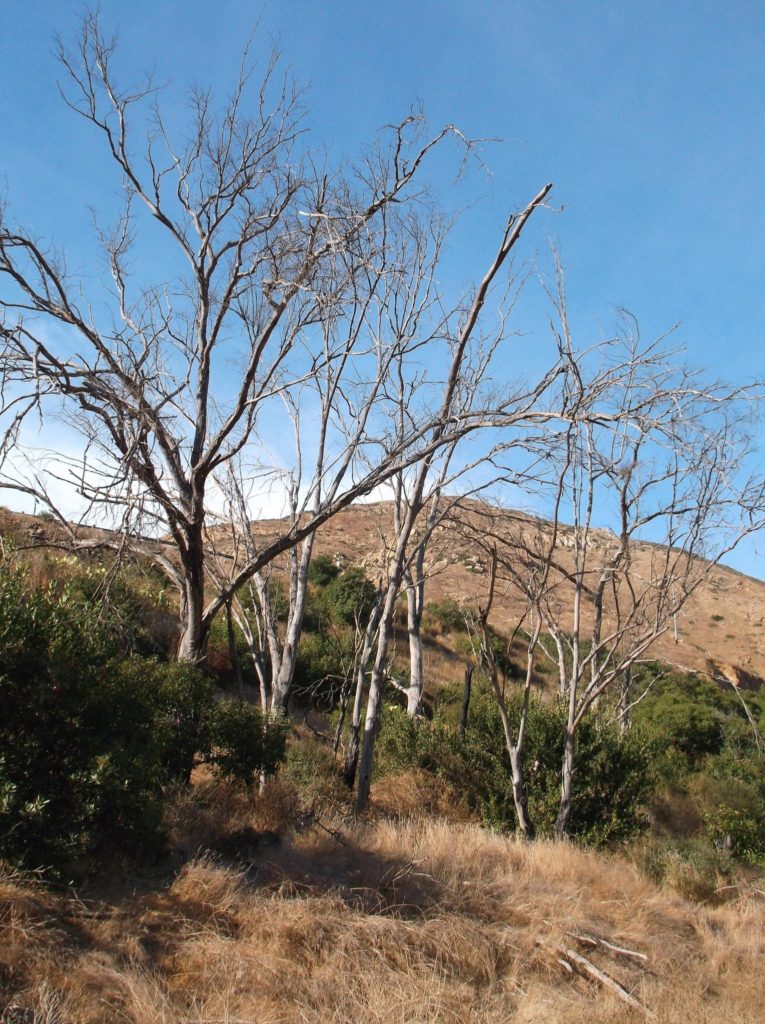 The hill on the other side of the dam. 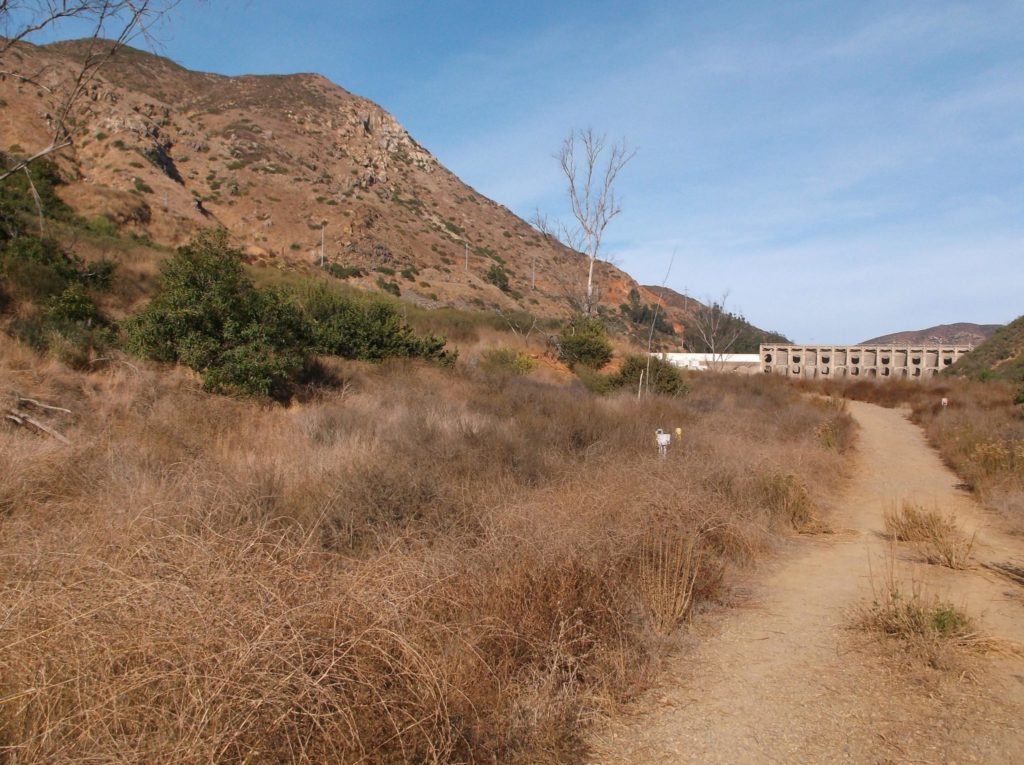 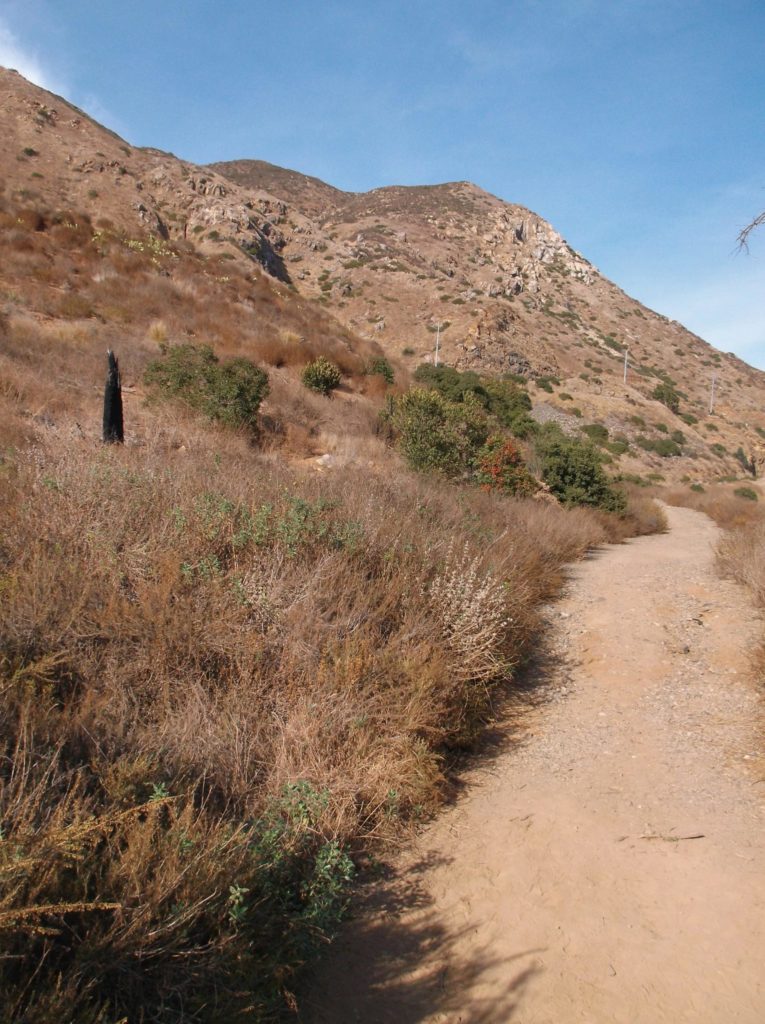 And this old aqueduct..

I had to take a few, this one a bit closer. 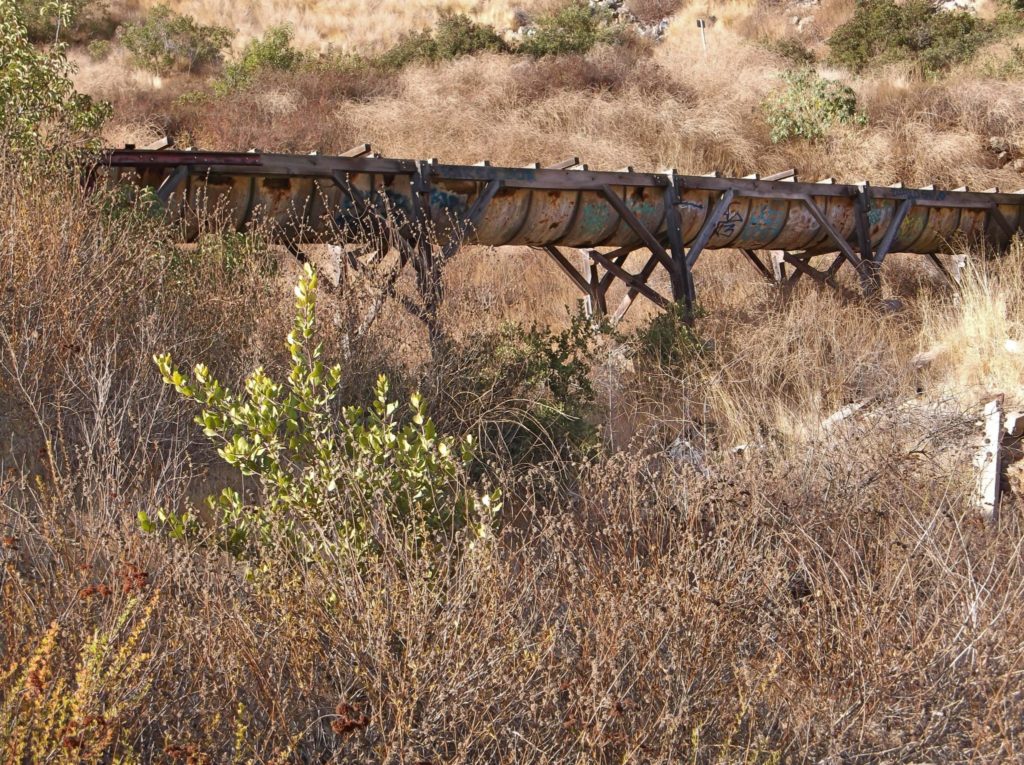 Then I heard voices coming closer, I had not seen my son and Meika since I took those picture of them from way above….

Getting closer to the dam, four teen-aged boys passed me… at the same time I spotted my son. Can you? Look under the first spillway column.. He is in a black shirt. 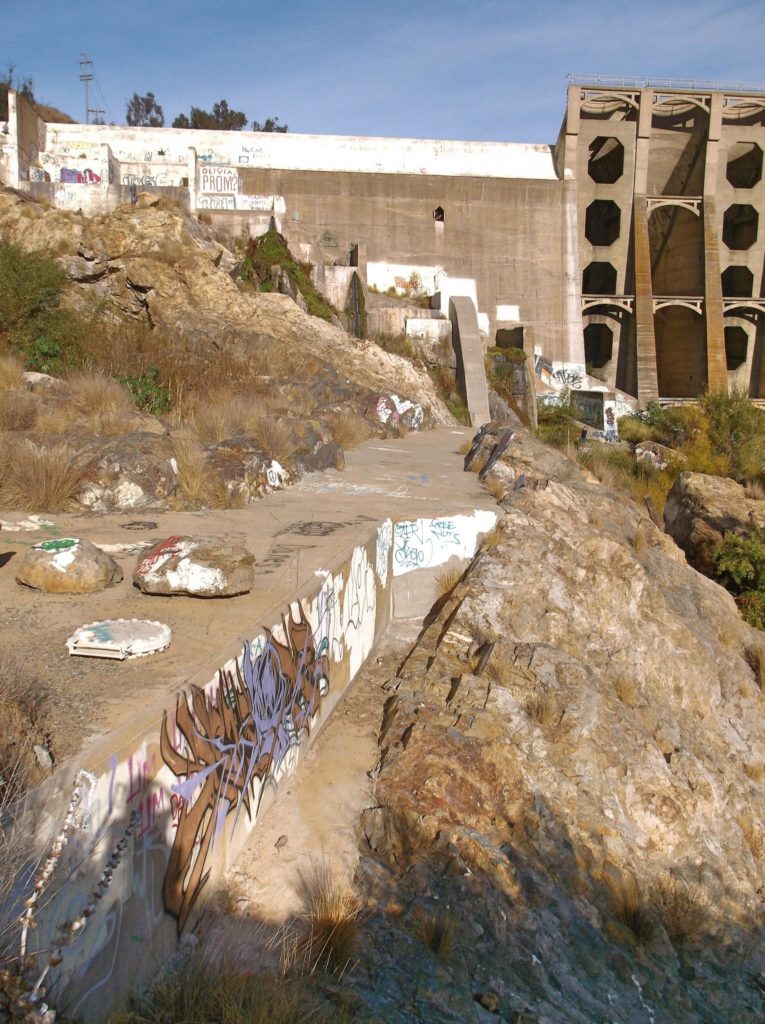 The dam as close as I was able to go.. 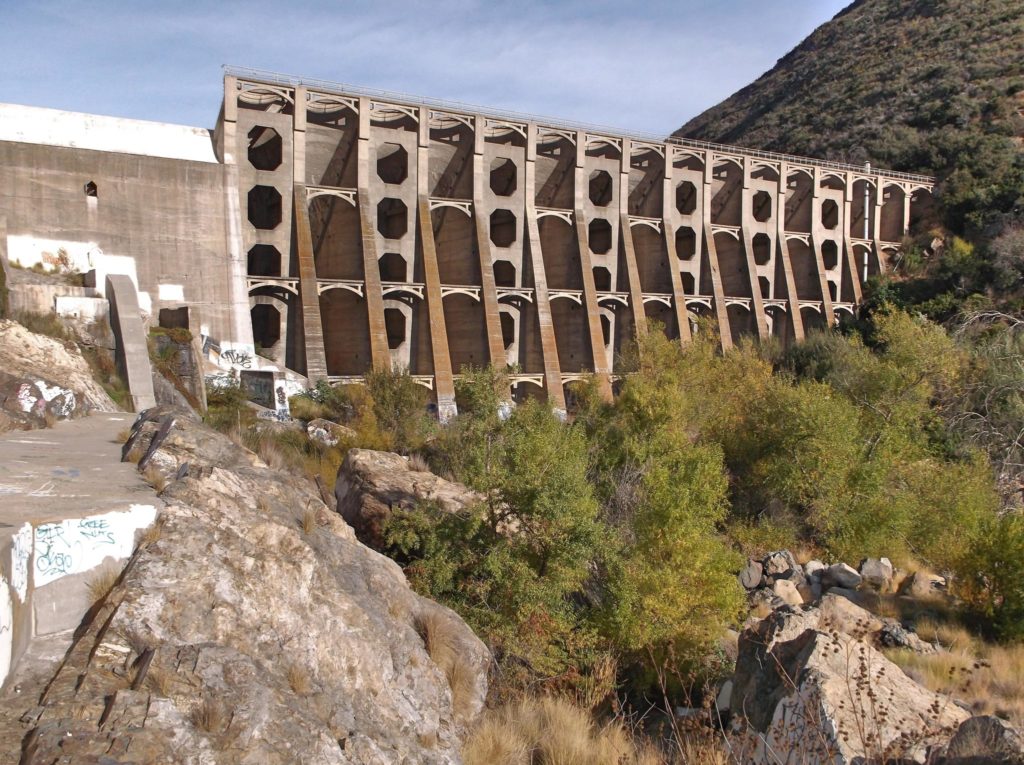 Those teens started climbing the dam. We do have rangers that watch the dam. I circled the teens in red, my son in blue and the ranger in green. Because the ranger saw the kids, my son was spotted and asked to leave as well.  I didn’t want to stick around although no one noticed me.. 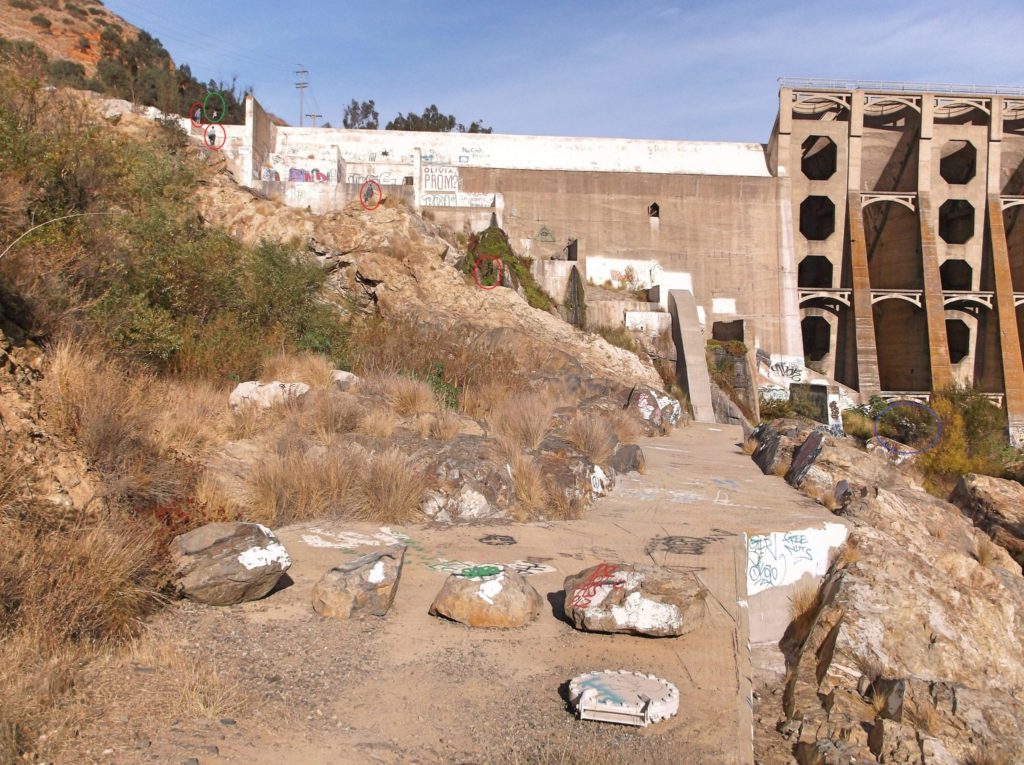 This was our trip to Lake Hodges Dam. Hope you enjoyed the trek.