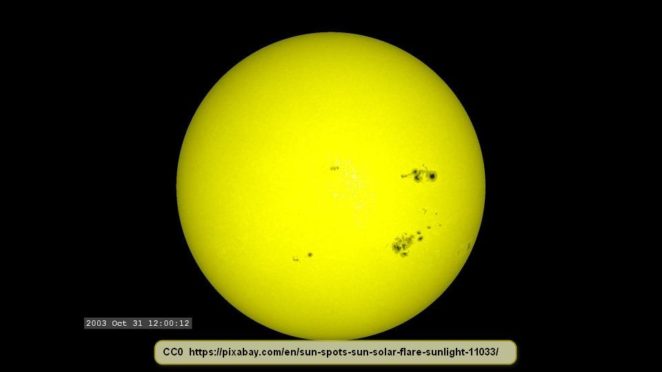 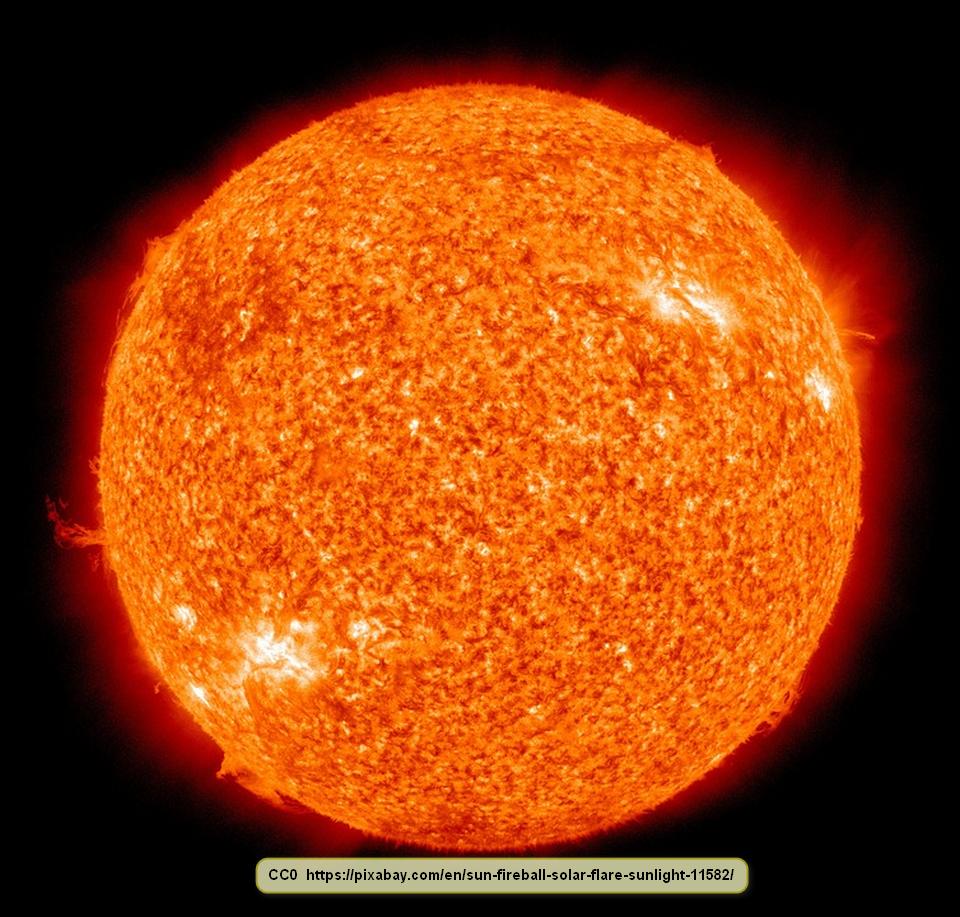 Easily the largest object in our solar system is our sun. It is likely that most people know that, but it is equally likely that they don’t grasp just how big it is and how it is constantly changing. Sunspots and CMEs are examples of some of the changes that can be seen.

Variations in our sun are of tremendous importance because they affect the earth, sometimes in big ways. The sun is directly responsible for our weather and climate, so changes in the output of the sun impact both climate and weather. It can also affect us in other ways.

It should be understood that in comparison to the earth, the sun is totally enormous. Over a million earths would fit inside the sun, with room to spare. In fact, though there are four planets in our solar system that are far larger than the earth. Yet, all of the planets, moons, asteroids, comets, and other material in the solar system account for only about 15 hundredths of one percent of the mass in the solar system. The other 99.85% of the mass is contained in the sun, despite the fact that the sun is primarily composed of the two lightest and most basic elements; hydrogen and helium.

The sun doesn’t look as big as it really is because it is about 93 million miles away; so far that it takes about 8 minutes for light to travel from the sun to the earth, though light travels about 186,000 miles per second. At that distance, the earth only receives an incredibly small amount of energy from the sun’s solar output. Yet, the sun is responsible for the weather we experience every day. In fact, without that energy, the earth would be frozen solid.

The sun is continuously changing, though. This means that the amount of energy the earth receives from the sun is also constantly changing, though we are normally unaware of it, partly because our atmosphere spreads the energy out. Major changes in the solar output are mostly noticeable only over the long term, as climatic changes. 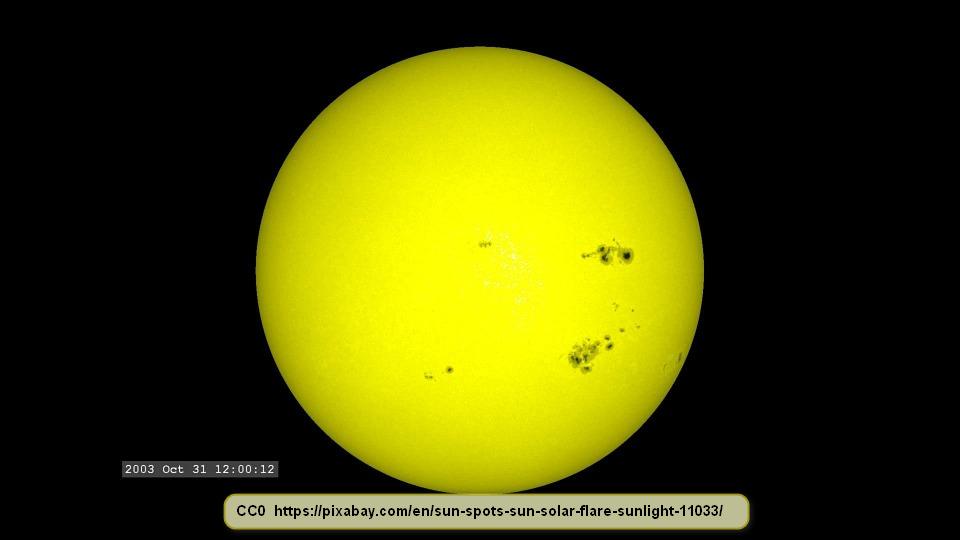 Some of the changes in the sun are those we’ve known about for a very long time, though they aren’t understood. For example, the sun goes through periods of time when there are very few sunspots and other times when there are many.

Sunspots have been observed for thousands of years, though originally people didn’t know what they were. A sunspot is an area usually far larger than the earth on the apparent surface of the sun that appears dark because it is a few thousand degrees cooler than the surrounding area. If a person was able to see a sunspot against a dark background, it would be blindingly bright.

Each sunspot is also an intense area of twisting magnetic lines of force, many times stronger than ‘normal’. They are rather like gigantic magnetic storms on the surface of the sun.

It should be mentioned that this is simplified and it should be pointed out that the sun doesn’t have an actual surface since it is composed of ionized gas. It is merely easier to think of it as having a surface.

Sunspot cycles, when the sun goes from many to few, happen roughly every 11 years. This coincides with another solar change. About every 11 years, the sun’s north and south poles swap places. There is clearly a connection for the polar reversal on the sun and sunspots, but scientists don’t know for sure what the connection is, what triggers the change, or how the change comes about. There are a number of theories, but none have been proven.

We do know that sunspot activity has an enormous impact on the weather and climate on Earth, though, again, we aren’t sure why and how. During the period that is now known as the ‘little ice age’, the sun went through a quiet period of around 75 years when it had few or no sunspots. The connection is circumstantial, but it is almost certain that the connection is there because the little ice age began at the beginning of the sun’s quiet period and ended when the number of sunspots again grew. 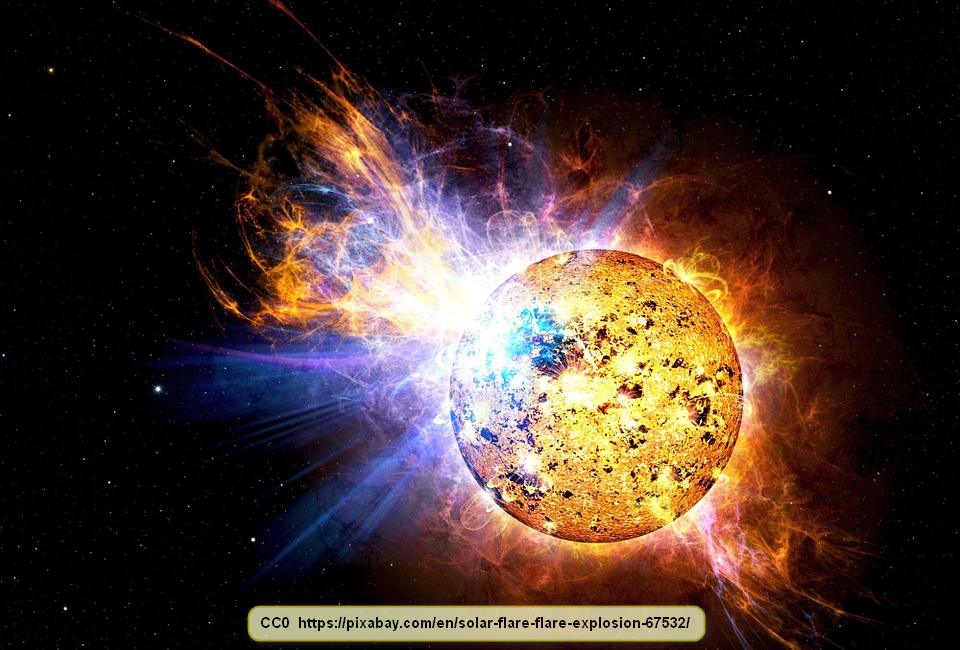 The little ice age also coincided with the Irish Potato Famine and the bubonic plague pandemic, though the connection is very complex. However, it is obvious that there are sometimes gaps in the sunspot cycle and it is likely that there are similar times when there is above normal sunspot activity if “normal” even applies.

Something else that occurs with the sunspot cycles, for reasons that aren’t totally clear, is Coronal Mass Ejections or CMEs. As NASA explains it, “Coronal mass ejections (or CMEs) are huge bubbles of gas threaded with magnetic field lines that are ejected from the Sun over the course of several hours.”

These have also been observed for thousands of years and most of the time, they are of little consequence to the earth. However, once in a while, a CME is blown toward the earth. These cause a drastic increase in the auroras or northern and southern lights. They can also cause severe damage to manmade systems such as satellites and electrical grids. In fact, this has happened with relatively minor CMEs. 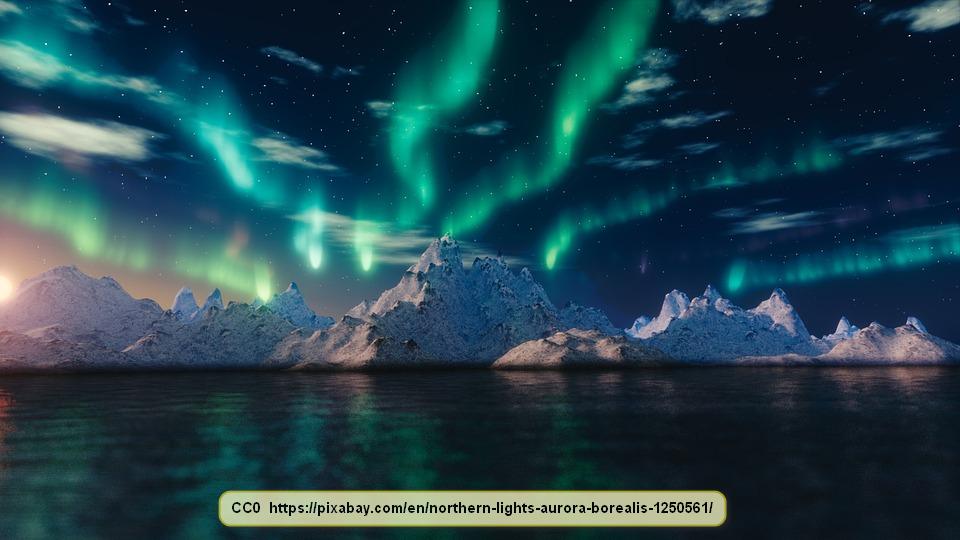 It nearly happened with a much larger CME in July 2012. The CME blasted across earth’s orbit, but thankfully the earth wasn’t in that spot at the time.

Again, scientists aren’t entirely sure what causes CMEs. Making it harder to figure out is the fact that while CMEs most often occur during periods of high sunspot activity, they sometimes also happen when the sunspot activity isn’t high.

The point is that the sun and solar output is continually changing and some of those changes can be extreme. We don’t know the reasons, but we have examples of the effects and how they impacted the earth in the past. There are cycles that are hinted at that we don’t know and there are huge gaps in our knowledge. In just the past decade, NASA has determined that the sun is much more variable than we’d previously thought.