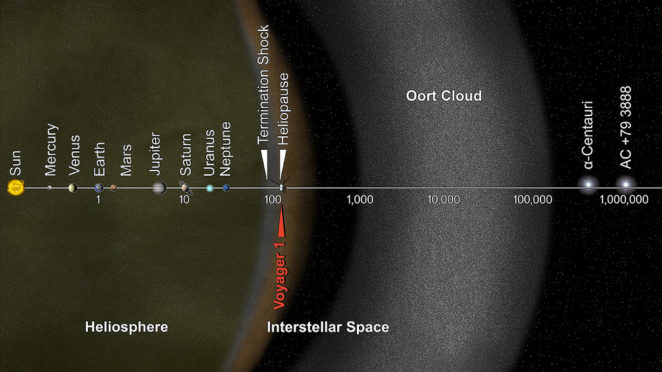 Just how big is the Solar System? Extremely big, if you count the Oort Cloud as being part of it!

The Oort Cloud takes its name from Dutch astronomer Jan Oort (1900-92) who in 1932 postulated the idea that a vast array of small objects must lie right on the edge of the Solar System, and that this was where the long-period comets originated that visited the inner Solar System so infrequently that they were recorded once in human history and never again. (Many short-period comets may also have started in the Oort Cloud but were captured by the gravitational influence of the outer giant planets and now have smaller orbits).

Although it is impossible to view the cloud directly from Earth, and no space probes could possibly reach it and transmit data about it back to Earth, most astronomers now accept that it exists and are in reasonable agreement about its composition.

It is believed that the Oort Cloud contains trillions of objects, mostly lumps of rock and ice no more than a kilometer wide, that were part of the Sun’s original disc of planetary material that never coalesced to form planets but were scattered to the far reaches of the Solar System under the gravitational influence of the giant planets (e.g. Saturn and Jupiter) when they formed.

The Oort Cloud is aptly termed a cloud because it does not form a disc of objects that orbit the Sun in roughly the same plane as the planets but is a spherical halo that extends in all directions. However, there is also thought to be an “inner Oort Cloud” that is in the form of a disc.

There is plenty of debate over the extent of the Oort Cloud. A convenient shorthand for explaining distances within the Solar System is the Astronomical Unit (AU), which is the average distance from Earth to the Sun. One estimate of the size of the Oort Cloud has it beginning at 2,000 AUs and extending to 50,000 AUs. However, some astronomers reckon that the outer edge could be anything from 100,000 AUs to 200,000 AUs.

To put these distances into some sort of context, the outermost planet, Neptune, is 37 AUs from the Sun. The Kuiper Belt, that contains a mixture of lumps of rock and dwarf planets including Pluto, extends to 50 AUs.

If the furthest estimate for the extent of the Oort Cloud is accepted, and expressed as light years rather than AUs, we are talking about objects, held within the Sun’s gravitational field, that are more than three light years away. The closest star to the Sun is Proxima Centauri, which is 4.25 light years away. However, the mass of Proxima Centauri is only about one tenth that of the Sun, which is why the outermost Oort Cloud objects have not yet moved house!

Even so, the gravitational influence of the Sun is extremely weak at these vast distances, and the rotation of the Milky Way has its own gravitational influence as well as bringing other stars closer at times to the Sun – although such relative movements take place over thousands and millions of years. It is these gravitational perturbations that cause smaller objects to leave their million-year solar orbits and take a different course towards the inner Solar System as comets.

Considering that we are still talking about the Solar System, with just a passing reference to our next-door neighbor, the wise words of Douglas Adams in “The Hitchhiker’s Guide to the Galaxy” seem more pertinent than ever:

“Space is big. Really big. You just won’t believe how vastly, hugely, mind-bogglingly big it is. I mean, you may think it’s a long way down the road to the chemist, but that’s just peanuts to space.”