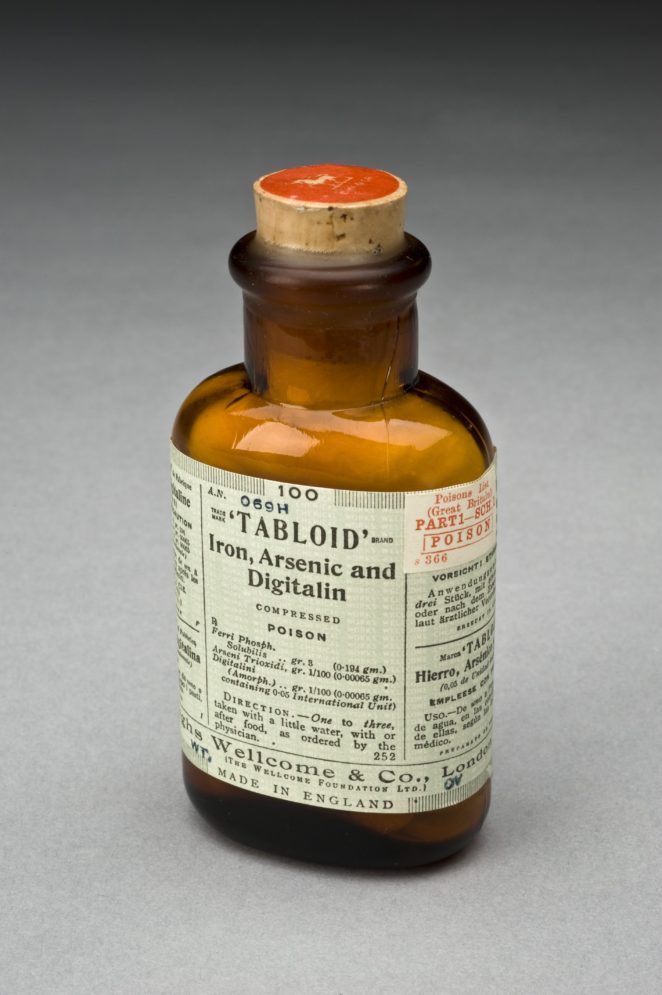 L0059007 Bottle of iron, arsenic and digitalin tablets, London, 1916- Credit: Science Museum, London. Wellcome Images images@wellcome.ac.uk http://wellcomeimages.org The combination of iron, arsenic and digitalin was used as a heart stimulant to treat heart conditions. Tabloid was the brand name patented by Henry Wellcome in 1884 to describe compressed tablets of drugs. The trademark was later extended to other products such as first aid kits. maker: Burroughs Wellcome and Company Place made: London, Greater London, England, United Kingdom made: 1916-1940 Published: - Copyrighted work available under Creative Commons Attribution only licence CC BY 4.0 http://creativecommons.org/licenses/by/4.0/

Arsenic is a metalloid element (chemical symbol As, atomic number 33) that has long been known to be poisonous to humans. In its compound form as arsenic trioxide it has traditionally been a favourite weapon of murderers because it is tasteless and odourless and the symptoms of arsenic poisoning are very similar to those of natural diseases such as cholera and food poisoning. A famous case in the 19th century was that of Mary Ann Cotton who committed at least twenty murders, including those of eight of her own children, before anyone suspected that the deaths were not due to natural causes.

It was also not difficult for people to get hold of arsenic compounds because they had uses that had nothing to do with killing people, or at least not intentionally. Most people have a degree of tolerance to arsenic, although this varies between individuals, and it is unusual among toxic substances in that small amounts will be expelled from the body and leave no trace. It has therefore been used in the past in ways that are relatively safe but, for obvious reasons, such uses are not recommended today! 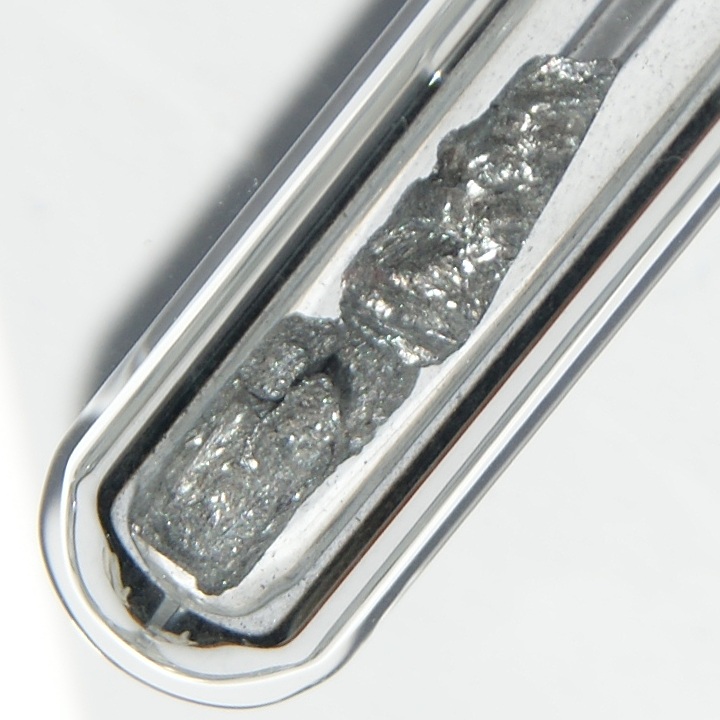 In small amounts, arsenic trioxide has a stimulant effect, and it has been used as such since antiquity in various medical preparations. Practitioners in ancient India and China used it in their remedies, as did a late 18th century medical man by the name of Dr Fowler. His “Fowler’s Solution” was a tonic that contained arsenic trioxide and it presumably had a beneficial effect because it was used throughout the 19th century. The problem with it was that people who noticed a slight improvement in their condition would be tempted to take more of it in the belief that you can’t have too much of a good thing. Unfortunately, in the case of arsenic, you can! Many cases of self-poisoning were probably attributable to this cause, and it is possible that Charles Darwin was one of the victims of Fowler’s Solution, although he did manage to live to the age of 73 despite his frequent use of it.

Another “peaceful” use of arsenic was in paint and pigments. An 18th century German chemist named Carl Wilhelm Scheele developed a pigment called “Scheele’s Green” which used the compound copper arsenite. This proved to be highly popular in a wide variety of applications including artists’ paints, cotton dye, wallpaper colouring, and even food dye in sweets. The latter usage must have made countless numbers of children ill with stomach disorders, and possibly led to early deaths.

Although the above usages are listed as being “non-lethal” it is quite possible that one very prominent person was unwittingly killed by Scheele’s Green. This was Napoleon Bonaparte (1769-1821), who died in exile on the Atlantic island of St Helena. When a post-mortem analysis was made of a strand of his hair it was found to contain an unusually high concentration of arsenic, which led to suspicions that that he had been murdered.

However, Napoleon’s bedroom was papered with green wallpaper that had been coloured with Scheele’s Green, as was common in many homes across Europe at that time. The problem was that, although arsenic poisoning was not normally a hazard of having green wallpaper, there were conditions under which it could give off arsine gas which would then be breathed in by anyone sleeping in the room. Just such conditions existed on the windy, cold and rain-swept island of St Helena. The pervading damp would have encouraged fungal growths on the wallpaper which in turn would have set in a train a metabolic process leading to the production of arsine gas.

As mentioned above, arsenic is associated in the public mind with its use as a deliberate poison, with its wielders going back many centuries and probably including Cesare and Lucrezia Borgia in the 15th/16th centuries. However, the introduction of reliable tests for arsenic poisoning in the late 19th century made it less popular as a murder weapon and, by the time that Joseph Kesselring was writing his famous play “Arsenic and Old Lace” (1939), it was the stuff of black comedy rather than terror to potential victims.

Arsenic’s non-lethal uses are now confined to strictly controlled industrial processes, and even these are being phased out wherever possible. Arsenic is no longer used, for example, in pesticides, but certain timber treatments do make use of it. Such uses can pose problem when it comes to the disposal of products in which arsenic has been used, but it is generally held that the amounts in question are very low. It should also be remembered that arsenic is a naturally occurring substance and it is impossible to avoid coming into contact with it entirely.