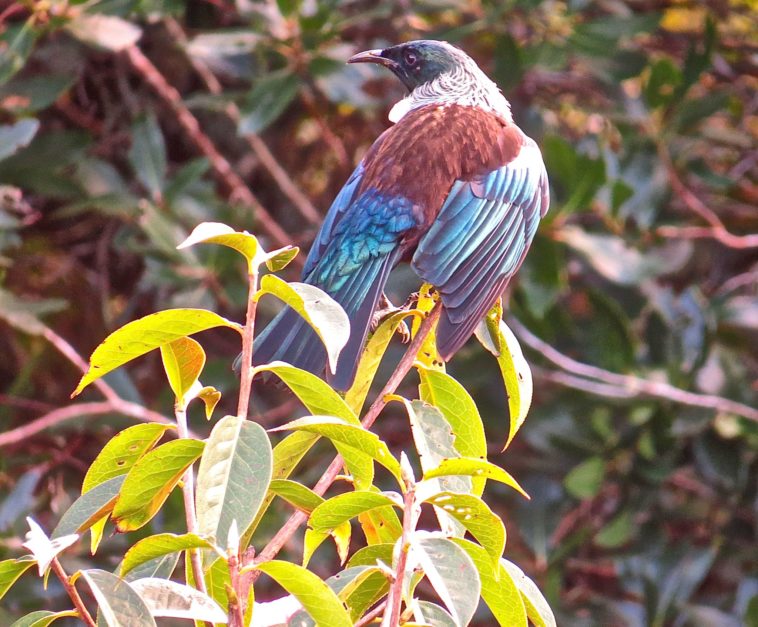 This is the New Zealand Tui , which is unique to New Zealand. It is a type of bell bird and very melodious. I have heard of one Tui that talks and speaks English words, although maybe one or two words. The Tui birds have a distinctive tune for the area that they live in.

In photographing them they don’t sit still for long, they prefer to be heard more than seen, but I have been fortunate to capture some birds with my camera.

A lot of times it seems on some sightings that the Tui is black but that is not the case, how the Tui appears often depends on the sunlight shining on their feathers. This Tui is eating the nectar of a bottle brush blooms, a tree imported from South Africa.

Here’s one that appears darker than some, the truth is that the colour of the feathers are the same, but appearances changes with the lighting.

Quite often when I get the opportunity to photograph a Tui sitting in the tree, it is set on getting his ten cents worth with his singing. He is speaking to the other birds in his language or maybe he just loves singing and his own voice.

Now Tuis are honeyeaters, they feed on nectar from flowers of native plants such as purr, rewarewa, kahikatea, pohutukawa, rata, kowhai, kaka beak and flax.

Tuis are widespread throughout New Zealand. They are more scarce in drier areas. The Maoris used to eat them.

Tuis are notoriously aggressive and will defend their patch of flowering or fruiting tree or part of a tree. They vigourously chase other birds away from their territory with loud whirring wings. Tuis have a display flight, in which they fly upwards above the canopy, then make a noisy , near vertical , dive back into the canopy.  Tuis have a dynamic role in New Zealand native forests, because they are one of the most commonest pollinators of flowering plants and also disperse the seeds of trees with medium sized fruits.

Now you can see the Tui’s true colours when the light is on it’s coat.

This Tui is eating the nectar from the flax flower.