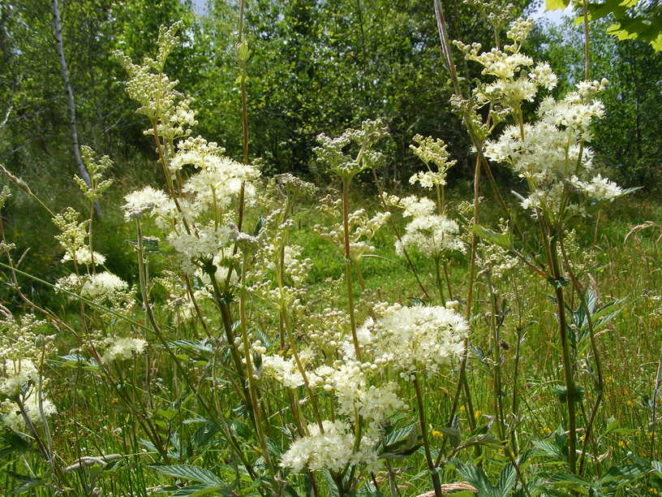 Meadowsweet (Filipendula ulmaria) is common throughout the British Isles, being found in damp parts of woods and meadows as well as marshes and fens.

It is an upright plant, growing to between 24 and 48 inches (60-120 cms) high. Its lower leaves have up to five pairs of leaflets, with a lobed leaflet at the tip. The leaves are green above and white and hairy below. Pairs of small leaflets separate the bigger ones.

Meadowsweet flowers between June and August. Each flower has five sepals, bent back, and five petals. The many stamens are clearly noticeable as they project outwards. The fruits form twisted spirals.

Meadowsweet seems to be well named in that it grows in meadows and has a sweet smell. However, the name is a corruption of “medesweet”, so given because in earlier times it was used to flavour mead, an alcoholic drink made from fermented honey.

Queen Elizabeth I was known to appreciate the smell of meadowsweet and instructed that it be used to mask domestic smells, this being done by covering floors with freshly cut blooms.

However, an alternative name in Yorkshire is “courtship and matrimony”, which refers not only to the heady small of the flowers but the sharper scent of the leaves when crushed, which therefore represented the reality of marriage!

Another use of meadowsweet in past times was, as an infusion, to relieve pain and calm fevers. The sap of meadowsweet stems contains chemicals that are of the same group as salicylic acid, which is an ingredient of aspirin.