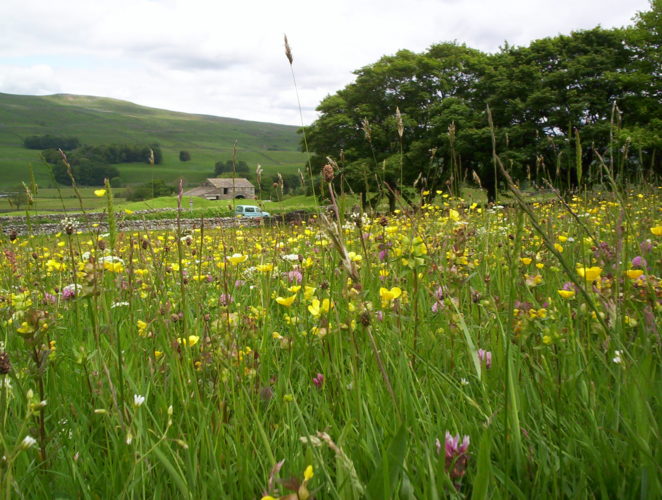 The photo (one of mine) is of a field in Wensleydale (North Yorkshire) that is yellow with meadow buttercups (Ranunculus acris). This is the most prominent of the three buttercup varieties that are commonly found in Great Britain, the others being the creeping and bulbous buttercup.

The meadow buttercup can grow up to 36 inches (90 centimetres) in height and prefers damp conditions. It has a large number of leaves, which are divided into anything from two to seven lobes, and the small flowers, which can vary in shade from bright to pale yellow (or even white) first appear any time from May to July and can last right through the summer.

The buttercup is poisonous to cattle, which is one reason why the meadows are not grazed at this time of the year. However, cows tend to avoid eating them anyway, which is just as well.

Children like to pick buttercups and hold them under each other’s chins to see if the yellow reflects on the skin. If it does, this is supposed to show that the child in question likes butter!

In former times buttercup roots were ground up with salt as a treatment for plague – they were said to cause blisters that drew out the disease. Fortunately, there is little call these days for testing whether the method works.

Another use for buttercups was to hang them in a bag round the neck, as a cure for lunacy. Nowadays one might think that wearing a bag of buttercups might be a symptom of the ailment rather than its cure!