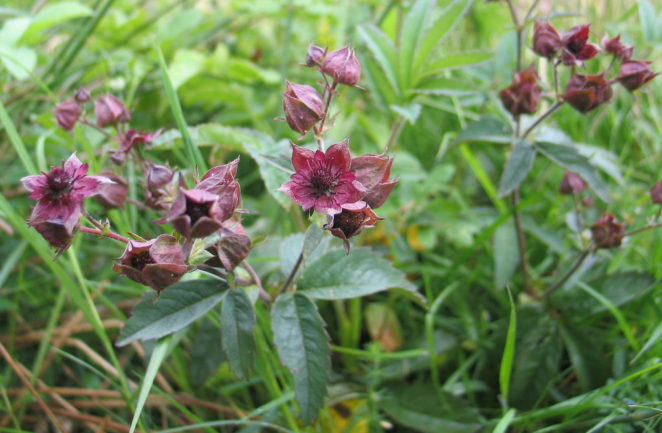 Marsh cinquefoil (Potentilla palustris), as the name suggests, grows in wet places such as bogs and peat. It is more common in northern areas of the British Isles than further south. In the Isle of Man it has the name “bog strawberry”.

Cinquefoil is French for “five-leaved”, although this refers to the arrangement of leaflets within a single leaf.

Marsh cinquefoil grows to between 6 and 18 inches high. A creeping underground stem produces upright stems on which grow the largish leaves, divided into five leaflets as mentioned above.

The plant flowers from May to July, the flowers being reddish in colour, which is unusual for cinquefoils in that most varieties have yellow flowers. The flower sepals are much longer than the petals. The fruits are carried in a spongy receptacle.

Silverweed (Potentilla anserina) is a variety of cinquefoil that has the more usual yellow flowers, and its silvery leaves are divided into up to 12 leaflets.

It was an important crop plant in earlier times before the introduction of potatoes. The starchy roots were eaten raw, baked or boiled, or ground down to make porridge or bread.

Traditional names for silverweed include “bread and butter”, “bread and cheese” and “seventh bread”.

It also had medicinal uses, being used to treat mouth ulcers, sore throats and internal bleeding.