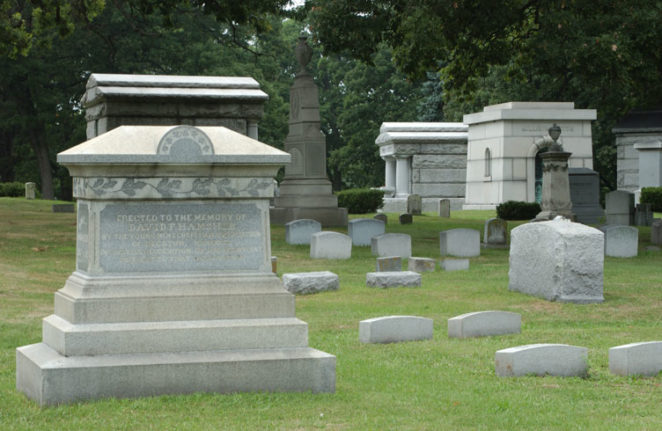 We will begin our journey heading into the grounds of Greenwood Cemetery in Decatur, Illinois. Many legends and tales have been told about Greenwood throughout the years and apparently, not everyone there rests in peace. The story of Greenwood’s most famous resident ghost began around 1930. It concerns a young couple who were engaged to be married. The young man was a reckless fellow and was frowned upon by the future bride’s family. This was the time of the Prohibition and young men did what they could to make money. In this case, he sold illegal whiskey. One summer night the couple decided to make plans to elope. They would meet just after midnight, as soon as the young man delivered one last shipment of whiskey and had enough money for their wedding trip. Unfortunately while delivering the whiskey he was murdered. The killers dumped his body into the Sangamon River, where two fishermen found it the next morning.

The young woman had gone to meet him the night before and had waited until daybreak. Worried she returned home and was devastated to learn that he had been killed. She became crazed with grief tearing at her hair and clothing. A doctor was summoned who gave her a sedative.  Later that night she disappeared and was found the next day floating face down in the river having taken her own life hoping to find her lost love in eternity. Her parents laid her body to rest on a hill in Greenwood Cemetery and it has been said that here she does not lie in eternal slumber.

There are many people who have reported encountering the “Greenwood Bride” on that hill in the cemetery. They claim that the ghost of a woman in a glowing bridal gown has been seen weaving in and out among the tombstones. She walks her head down, holding a scrap of cloth in her hand and occasionally raising it to her face as if to wipe away tears. It is assumed that this is the young woman who took her own life. It is not known where her lover was laid to rest. What is most interesting is that if she walks about seeking her lost love would it not seem that he, who also met a tragic death would come forth to seek her out? There is also the legend of Greenwood’s phantom mourners. One witness was in the cemetery visiting her father’s grave. Walking up a small hill carrying flower she saw a woman in a long, black dress standing near a tree. She was holding a small bunch of yellow flowers. For a moment the woman turned away and when she looked again the lady in black had disappeared. She was nowhere to be seen.

A former employee working with some other men said that they were taking a break one summer afternoon when a funeral party arrived in the area where they were mowing grass. They walked away for about 5 minutes and when they returned the funeral party had disappeared and there had been no funerals scheduled that day.

Another man visiting the cemetery walked over a hill to find a funeral taking place. He waited for a few minutes out of sight and then continued to climb the hill. The party was gone. He could find no sign of the mourners and no open grave. Walking around he came to the realization that the mourners had been gathered around the tombstone of a woman who had died on that day – nearly 60 years before.

A former staff member was raking leaves one fall afternoon when he spotted a funeral. Finding it odd that no funerals were scheduled that day he took a closer look and noticed that the hearse and the other cars parked nearby were from the 1940s. He was intrigued by this idea and asked another grounds crew member if he knew which funeral home arranged vintage cars for funerals. When the man looked at him strangely he explained what he had seen. Together they checked things out and discovered that no funerals had taken place that afternoon and there were no open graves in that area of the cemetery.

A man recalled his grandfather’s funeral when he was a young boy. The family had attended the service and then followed the hearse to Greenwood. After the service, Becker and his grandmother were walking back to the car when he saw something unbelievable and realized that his grandmother was seeing the same thing. Inside the car sitting on the driver’s side was his dead grandfather. He looked completely solid and appeared to be alive. He looked ready for a Sunday drive looking straight ahead out of the windshield his hands gripping the steering wheel. Grandfather remained that way for about 20 or 30 seconds and then gradually faded away. One would think that a small boy seeing this would run away screaming.  However, I remember sitting in my grandma’s lap in 1967 being comforted after my dad had died and both of us saw him standing in the kitchen doorway. I did not feel fright instead I felt great comfort that dad was around still.

One of the cemetery’s most enduring legends is the story of the “ghost lights” that appear on the south side of the burial grounds. The legend tells of a flood that occurred many years ago, around 1900-1905, which wiped out a portion of the cemetery. The Sangamon River having been dammed in the late 1800s was often prone to floods. One wet spring the river overflowed and washed into the lower section of the cemetery. Tombstones were knocked over and surging waters washed graves away and forced buried caskets to the surface.

Many of the caskets went careening downstream on the swollen river. After the waters receded it took many days to find the battered remains of the coffins. For some time afterward farmers and fishermen would find coffins and even corpses washing up on riverbanks miles away. Since identity could not always be established many of them were buried again in unmarked and common graves. These new graves were placed on higher ground upon the southern hills of Greenwood and since that time mysterious lights have appeared on these hills. Some say the wandering ghosts are now doomed to search forever for the place where their remains are now buried. No one has been able to solve the mystery of the lights.

There are many more stories and many more things to see, hear, and feel at this cemetery. If you have the time take a trip and see what you can find.