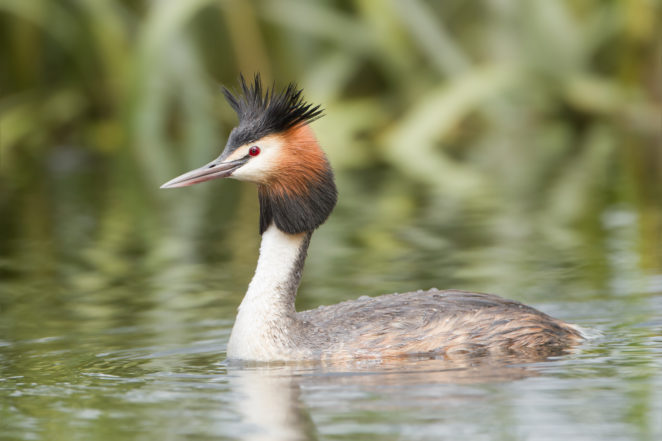 The great crested grebe (Podiceps cristatus) is a water-bird that is present throughout the year in most of Western Europe. During the breeding season it is found on inland waters surrounded by vegetation, but in winter it can be found on estuaries as well as other types of open water such as reservoirs and flooded gravel pits.

It is the largest of the grebes, measuring 480 mm in length (19 inches). It is easily identified by the prominent black crest in adult birds, plus a conspicuous chestnut and black ruff on each side of the head. These features are prominent during the breeding season but much less so at other times of the year.

The great crested grebe has grey-brown upper parts and white underparts. The face is white, the neck pale grey and the legs greenish. The bill and eye are pinkish red.

Juvenile great crested grebes have upper parts that are striped black and white.

In flight, the great crested grebe trails its legs behind and stretches its neck out straight but at a lower level than the body.

It has a variety of calls including barks, trumpets and vibrating notes.

Great crested grebes feed mainly on fish, including minnows and eels, and will also take amphibians and the larvae of aquatic insects.

As many as six white eggs are laid on a floating heap of vegetation. Incubation, carried out in turn by both parents, takes around 28 days.The young are fed by both parents, but the brood is split between them so that the two groups live independently of each other. The young can feed themselves after about 8 weeks but will receive food from the parents for much longer (up to 20 weeks). Fledging takes place at 10 or 11 weeks. A second brood is often raised.