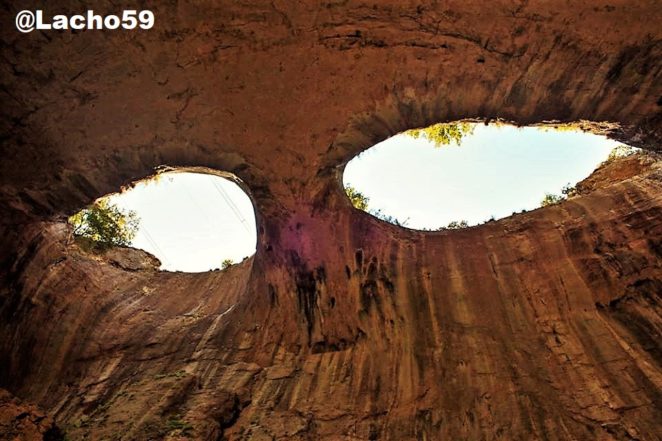 They say that God was a Bulgarian. That’s why Bulgaria has left its eyes. To watch and protect it Can anyone tell if it’s true or false?

And now some information. It is the longest cave tunnel in Bulgaria, with a length of 365 meters and a height of the entrances 56 meters. As a result of the erosion caused by the permeable waters, the phenomenon “Okna” or “Eyes of God” was formed in the ceiling – two almost identical holes in the form of eyes. This gives the unique appearance of the cave. Looking down from below, they look very much like eyes that seem to be staring at visitors.

The interior of the cave is dimly lit, as the displacement between the two entrances is large and the daylight outside from the outside enters them into bundles. The effect is astonishing, especially in sunny weather. The site is part of a cave corridor, which faces from east to west. It was formed at the end of the Credit Period 66-68 Million years ago. In the past, the waters of the Iskar River have filled the cave.

Now the level of the river is below the cave floor. As a result of the active karst processes, characteristic for this period, seismic activity and river activity, the cave-shaped cave corridor was interrupted and this part remained separate. Structurally, the cave consists mainly of light beige to white, healthy, massive organogenic limestones (there are well-preserved fossils of shellfish, birch, bivalves, brachypods, gastropods, sea urchins and ammonites – more pronounced in the western part of the geological Phenomenon). The thickness of the rock layers varies from 10 to 50 m.