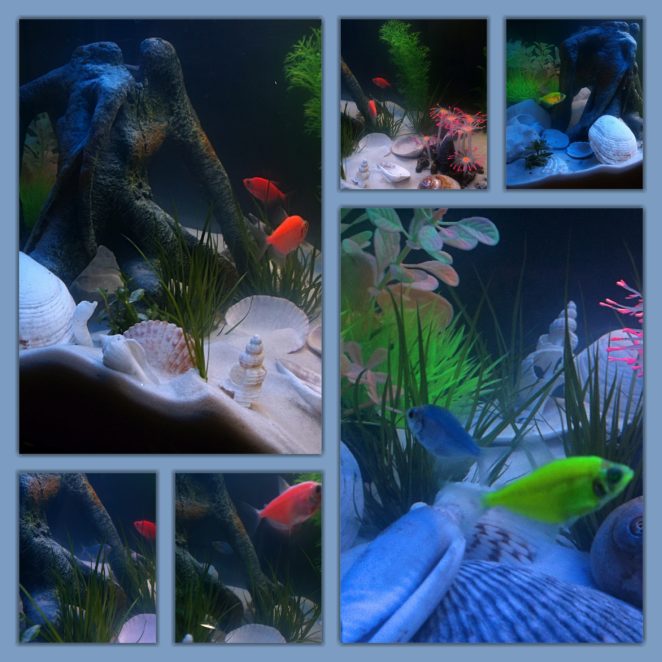 It all started a while back when I was researching GMO Animals for a quiz I made here on VIRILY.

I came across glopets! Yes, pets that glow. They have injected jellyfish DNA into cats, dogs, rabbits, fish and more.

Fish I thought? I would love to have an aquarium with these pretty fish…They look like salt water tropical fish, but live in fresh water.  While researching “Glofish” I found out some interesting facts.

The original Glow Fish was made from a Zebra fish or Zebra Danio, native of the rivers in India and Bangladesh. Scientists inserted a gene that encodes the green fluorescent protein (GPF), from jellyfish into the zebra fish embryo, allowing it into the zebra fish’s genome, which caused the fish to be brightly fluorescent under both natural and ultra violet light. The goal was to develop a fish that could detect pollutants in the waterways.

They also understood that this fish was marketable as a pet fish and soon introduced a line of red fluorescent zebra fish by a gene from sea coral and jellyfish, making orange-yellow zebra fish.

Since that time they have added Tetras and Barbs to the fish that glow.

They come in 6 colors and are not injected or dyed. They inherit their color from their parents.

The colors are Starfire Red, Cosmic Blue, Electric Green, Galactic Purple, Sunburst Orange, and Moonrise Pink. I have seen some color variations such as a light orange too.

I decided to get a 10 gallon tank and five Tetras. I chose Starfire Red, Cosmic Blue, Electric Green, Galactic Purple and Moonrise Pink. I didn’t get the Sunburst Orange as the color is so close to the red and pink.

When setting up the tanks aquascaping, I tried to use the rule of thirds like I do in my photos.

All of the pictures were fuzzy, this camera and I just cannot get a clear photo of the fish, so I decided to just put them in a group.

I used white sand on the bottom, that I bought for aquariums that reminded me of the color of the sand on Florida’s white sandy beaches, and shells that my friends and I collected while in Florida. I washed all of the shells very well with water. I bought a tree stump that is plaster, the back of the aquarium is a black back round.

For the plants, I bought some artificial tall plants for the back and to hide the pump and heater and to add depth. Then I bought the artificial pink plant and some real underwater plants and planted them.

I found out that the can multiply, but the adults will eat the eggs unless there is somewhere for the eggs to fall into and hide. So I got a bunch of tiny shells and littered the bottom with them.

It was really fun to set up, what do you think?