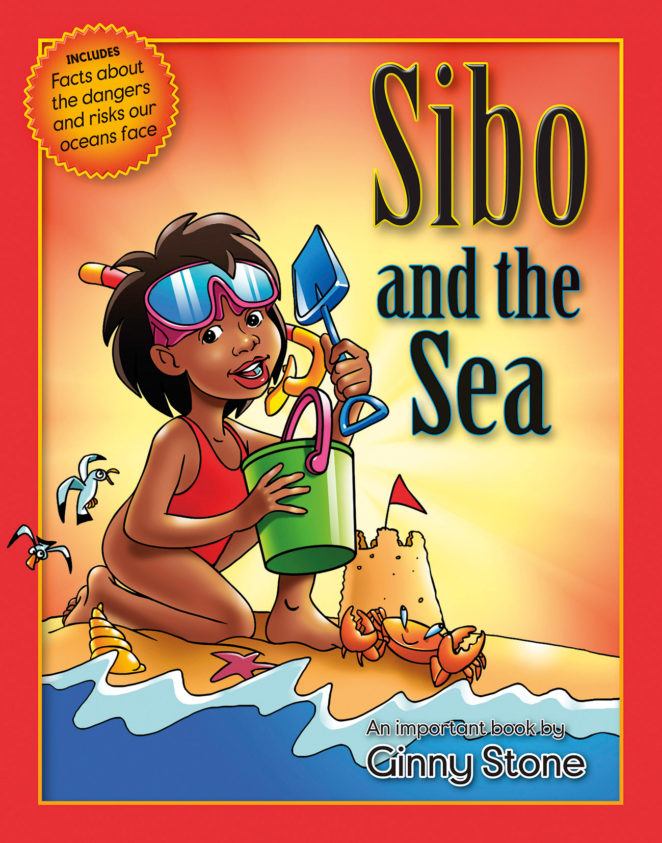 This ecologically sound and environment-friendly adventure story of the little girl, Sibo, and her trip to the seaside should appeal to any young child of middle-school age. How she can’t wait to reach her family’s destination, but then encounters disappointment along the way makes for intriguing reading.

Although the deeper message of the text is clear, Ginny Stone never fails to amaze with the witticisms and verse that she conjures up from her lively imagination, making all the books in the Sibo series (of which this is one) a source of great joy and delight, no matter the reader’s age or gender. Her use of direct speech makes the story come alive, and her command of diction ensures that her vocabulary is diverse and multi-layered. The immediacy and fluency of her writing renders the stories she tells a treat that one savours long past the initial reading, and the rhyme serves to jog one’s memory in such a way that her tales are easy to recall, while she is far from simplistic in her approach.

Despite Stone’s work encouraging a sensitivity towards all wildlife (in fact, all life) and an awareness of the need to do something meaningful about the situation before the dire consequences of humankind’s sometimes ill-conceived actions wreak havoc on the planet, she avoids pedantry in her writing by remaining fresh and innovative in the way in which she structures her stories. How the individual characters (primarily Sibo and her parents, who are highly individualistic, and yet who work together well) are alerted to the results of poorly thought out behaviour and come to respond positively to the less than ideal situations in which they find themselves makes for interesting and diverting reading that should linger in one’s mind long after encountering them in the text. In short, they have a resonance that is bound to change long-standing habits that, up to this point, might have gone completely unchallenged.

The roundedness of Stone’s characters adds a great deal to the plot, with all three of her major characters having both distinct merits, as well as certain flaws or shortcomings, which they have to put some effort into overcoming. Constructiveness and positivity are the author’s clear trademarks, with her never sinking to the level of the maudlin or the sentimental. Her spirit is rugged, as are her texts.

The lifelong lessons that Stone imparts are ones that should serve, in due course, to make this world a far better place that it might otherwise have become. It takes activists at every level to rouse the common consciousness of our joint responsibility for the welfare of our planet. Stone is such a one, whose stories are likely to have a solid impact on those who hold our future in their hands, being the up-and-coming generation. Hers is a voice to be reckoned with, so all readers should take account of the Sibo series, even if they have no young of their own. Sibo and the Sea (Lets look; ISBN 978-1-920116-76-7) is a worthwhile text in which to invest, and makes a distinct difference from the happy-go-lucky, but totally forgettable, adventures of Janet and John related in readers of previous generations.

An Interview with Ginny Stone, Author of Sibo and the Sea

Lois Henderson welcomes as our guest Ginny Stone, author of fourteen books in the Sibo series, who combines a hectic home life with being secretary/treasurer of the Southern African Association of Science and Technology Centres (SAASTEC).

Lois: Good day Ginny, and thanks so much for participating in our interview. Please explain the background to your writing of Sibo and the Sea.

Ginny: Just after I had written the fresh water book, one of my friends in Grahamstown said now I needed to write something about the sea, too. Plus, we loved going to Ocean Basket, and I was concerned about the (IUCN) Red List and wanted to make people aware that it was not okay to just eat any fish (children have evolved – I thought fish was just nasty when I was a kid).

Lois: Please provide a synopsis of the plot of Sibo and the Sea.

Ginny: Sibo and her family go on holiday to the sea. She’s really excited, but then gets very upset when she sees all the pollution along the coastline. Sibo’s dad explains that, although the situation is a bit bleak, there are people doing things to help out.  He takes Sibo to the aquarium, and they learn all sorts of exciting facts about various creatures that live in the sea. They also go to a restaurant, and mum finds out that she can’t just eat any fish she feels like anymore.

Lois: What were your major challenges with writing Sibo and the Sea?

Ginny: No real challenges writing this book. Sometimes getting the rhyming right with the facts is interesting… a challenge for Peter Sanderson to edit, too!

Lois: What were your highlights with your writing of Sibo and the Sea?

Ginny: Finding out some of the crazy facts about the denizens of the deep!

Lois: What has your feedback about Sibo and the Sea shown in terms of the impact that it has had on your target audience? Please give concrete examples of such, if possible.

Ginny: This is probably the most unsung title of the whole series, despite the fact that the sea and sustainable resources is a problem of note. Still, I want kids to know that the sea is not just a bottomless pit, and that it needs to be looked after and cherished, along with everything else. It is being read in schools and libraries around the country.

Ginny: Around about this time, Sibo and I had some fun writing the kids’ section of the kulula in-flight magazine for four or five months. (I was very cheeky – wrote to kulula.com and said their kids section was just nasty, and gave them an example of what I could provide – I even got paid for it!)

Lois: Thank you so much, Ginny, for granting me this opportunity to interview you. Sibo and the Sea really reflects your concern with the future of our limited marine resources. We wish you all the very best with your future Sibo books.