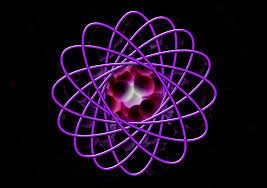 The basic particles of atoms are protons, neutrons and electrons. However, to call an electron a particle is perhaps a bit misleading, given that it can better be described as a packet of energy that whizzes round the nucleus of an atom and more resembles a cloud than an orbiting particle.

The electron is tiny in comparison to the nucleus of protons and neutrons. The mass of a proton is about 1800 times greater than that of an electron, but the two carry equivalent opposing electric charges, that of the proton being positive and the electron negative.

There will generally be as many electrons in an atom as there are protons. In a hydrogen atom, which has a single proton, there will be a single electron. However, a carbon atom has six protons and therefore six electrons. 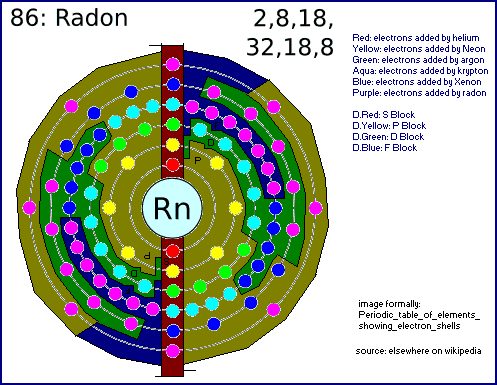 (The electron shells of Radon. Image licenced for use by Creative Commons)

An atom of sodium contains 11 protons in its nucleus and therefore has 11 electrons. These are arranged in three shells – two in the first shell, eight in the second, with the final electron being on its own in the third shell.

Electrons can be gained and lost between atoms. When this happens, the overall electric charge of the atoms will change, thus allowing chemical bonds to be made. Electric currents are created when electrons move between atoms of elements such as copper, which are classed as good conductors of electricity.