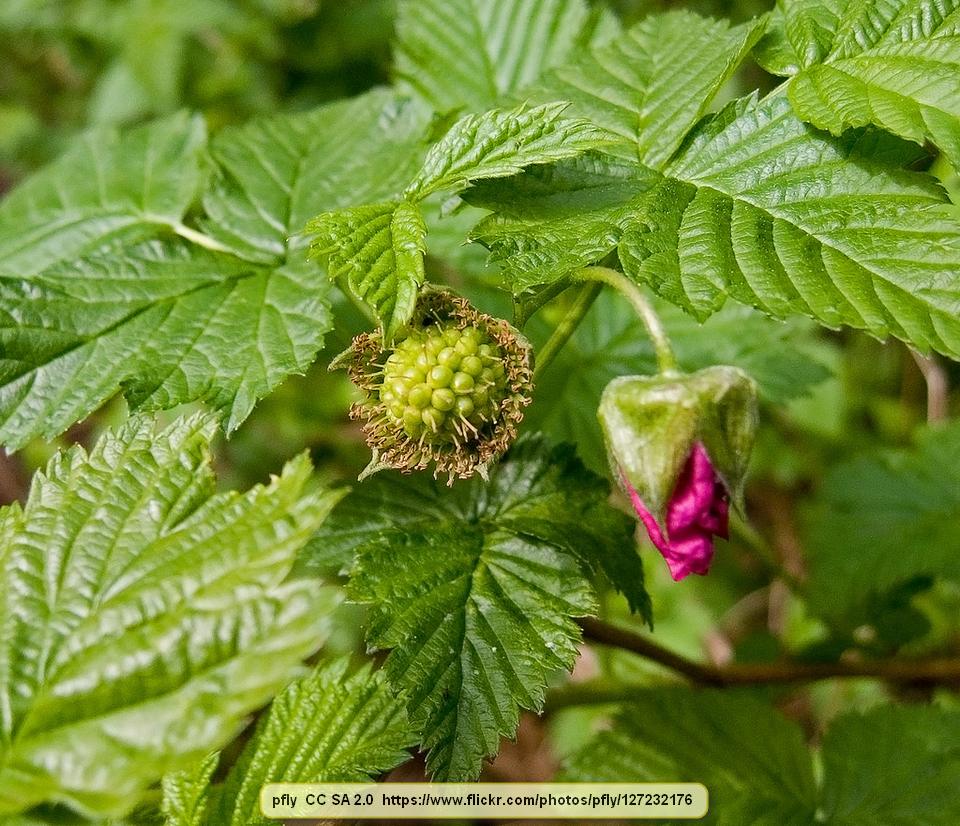 As a lot of people have figured out, there are many different species in the Blackberry genus of Rubus. All of them are blackberries, from the aspect that they all belong in the same genus. Raspberries and thimbleberries (Rubus parviflorus) are only two of these and there is more than one kind of raspberries. Another species in the group is called the Salmonberry (Rubus spectabilis).

Before going much further, it should be mentioned that one of the biggest differences between raspberries and what is commonly thought of as blackberries are that the rasp or core of the fruit is attached in blackberries. In raspberries and thimbleberries, the rasp isn’t attached and it comes free when the ripe fruit is picked. This gives the fruit sort of a hollow appearance. 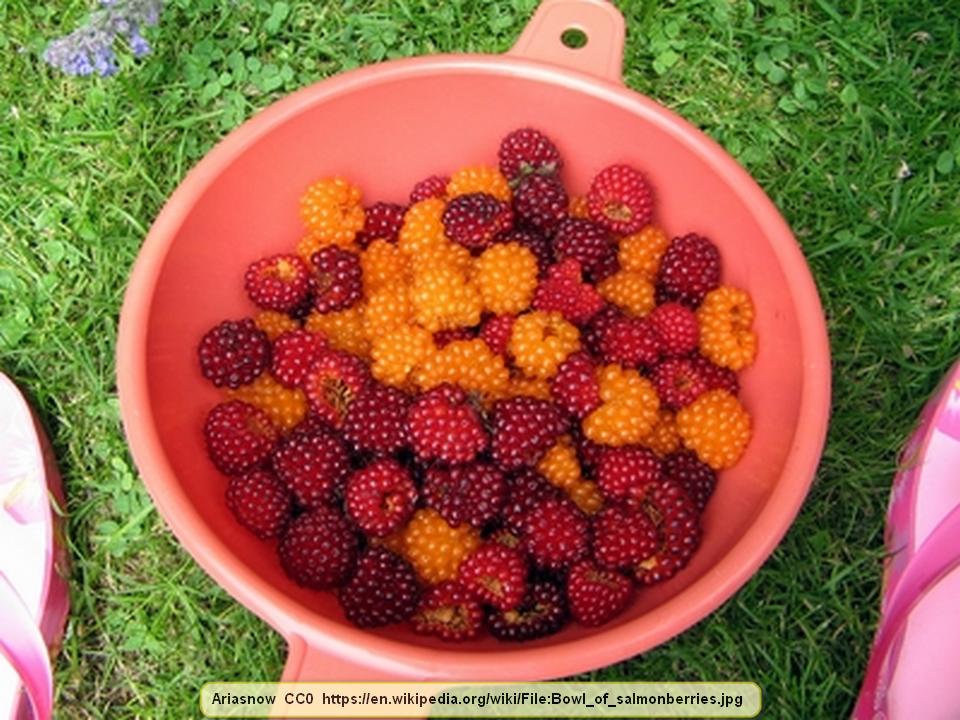 Salmonberries are another of the group that separates from the rasp and yields a hollow ‘berry’. This makes it more like raspberries than blackberries in the structure of the fruit. Note that these aren’t actually berries, they are aggregate fruits. (What might be a little more confusing is that a watermelon fruit is a berry.)

Salmonberries are native to the western part of North America, from Alaska to California and as far east as parts of Idaho and isolated areas of Montana. It has been grown in other places and has now become naturalized in the UK and Europe. 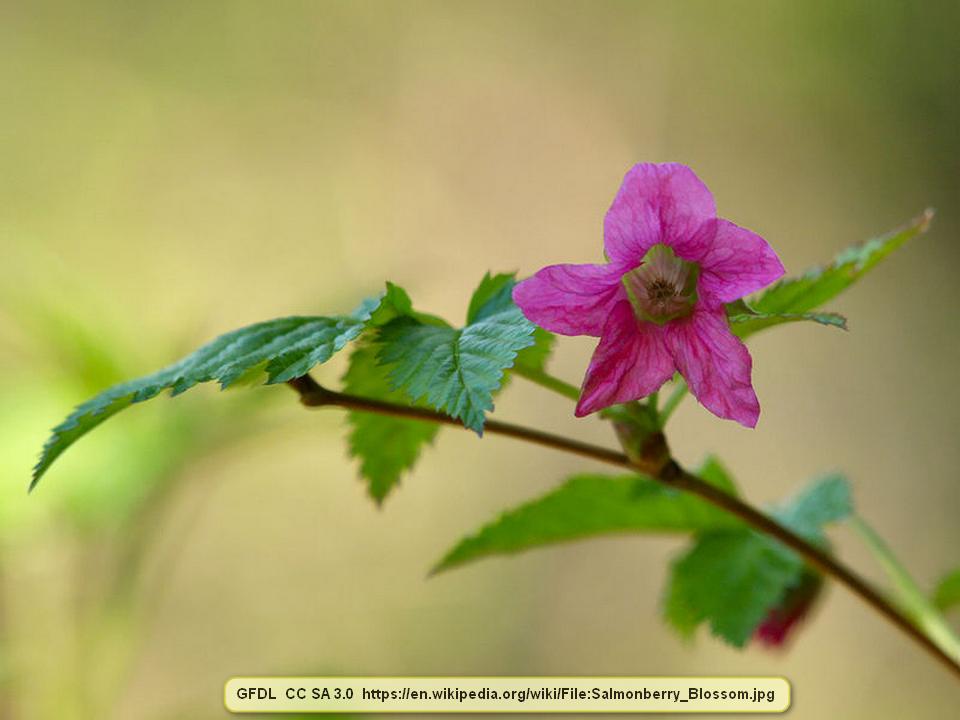 This plant is a bit different than blackberries and raspberries in that the flowers don’t consist of five white petals. The number of petals is the same, but the flowers vary from light pink to deep red or purple. One kind even has double-flowers. The fruit color is also a little different. With some, the ripe fruit is yellow, orange, or red.

The leaves are similar to blackberry and raspberry leaves, but instead of stout, sharp, backward hooking spines, salmonberries have hairs that serve the same purpose. 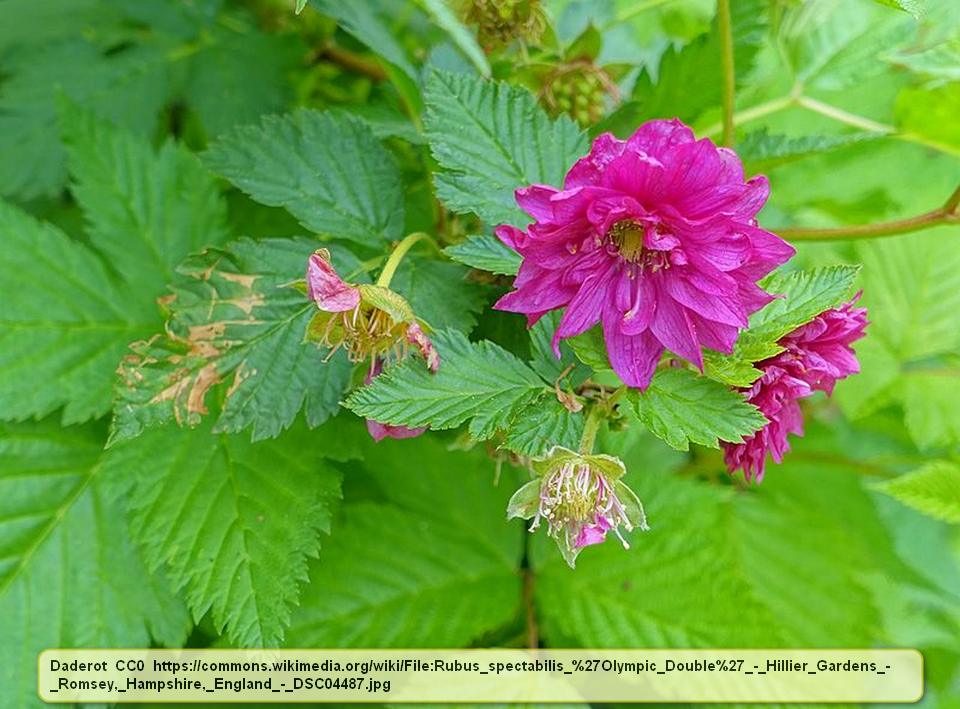 The vines of this plant usually grow between a foot to 14 feet in length, so they are somewhat smaller than blackberry bushes but larger than most raspberries and thimbleberries.

The fruits are tasty and sweet, slightly different than blackberries, raspberries, or thimbleberries. The ‘berries’ can all be used interchangeably. Salmonberries make excellent jams, pies, and cobblers.