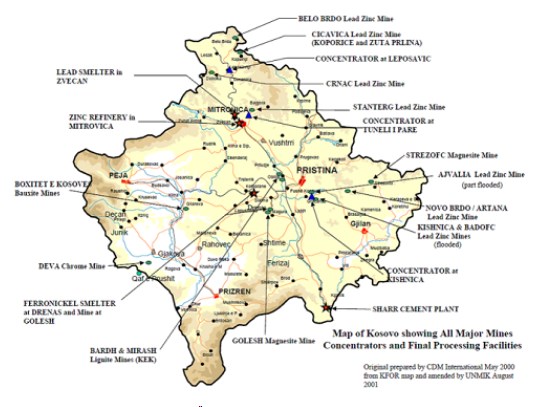 In the modern history of the world, there is no instance that a state is so infamously looted as it happened to Serbia in Kosovo. With the blessing of the international community, which completely ignored the inviolate property right as the basis of modern civilization, state and private assets and natural resources worth hundreds of billions of euros were abducted. The CIA states that, according to international standards, Kosovo is worth 500 billion dollars (estimated reserves of coal, natural gas and metals). The US experts estimated that Serbia has remained coal for a maximum of 35 to 40 years, while it has been in Kosovo for as much as 16 centuries, while the value of the site of seven strategic ores (lead, zinc, silver, nickel, manganese, molybdenum and boron) is estimated at even $ 1,000 billion.

The Independent Commission for Mines and Minerals of Occupied Territories, managed by Unmik, announced in 2004 Rainer Hengstman’s report that the World Bank has estimated Kosovo’s mineral reserves to 13.5 billion euros. The most important place is lignite, whose geological reserves amount to about 15 billion tons, balance reserves of lead and zinc are estimated at 51 million tons (74.1 percent of Serbia’s balance reserves), nickel and cobalt reserves to 19.9 million tons, and reserves of bauxite 1.7 million tons (potential aluminum production of 425,000 tons).

The World Bank has estimated that deposits of lignite and brown coal in Kosovo and Metohia are sufficient to produce electricity for one century, which is in line with the estimates of experts from the Mining and Geological Faculty in Belgrade, who also estimated that the potential in Kosovo is sufficient for two thermal power plants and production of electricity for a hundred years.

In the battle for the exploitation of Kosovo’s resources, the big world players joined: retired NATO general Wesley Clark(“Envidity Energy ltd ,,) , financial magnate George Soros,  and the company “Albanian Minerals”, whose director is Sahit Muja, “Avrupa minerals”, the US Global Mining Research Corporation, ,, Lidian International “(formerly” Rio Tinto “), focused on the research of the site in Orahovac (Kosovo), where so far it has been found from 1.87 to 8 grams of gold per tonne of sample, and many others.

The second-largest American company ACM that operates, which officially, unofficially, in Kosovo, owned by Madeleine Albright, was once interested in the purchase of Post and Telecommunications (PTC), which in its system inherited the Serbian infrastructure of Telekom Srbija, but, due to pressure from the public, she abandoned this purchase. But Albright, however, found a way to get a dollar through Kosovo. Her affairs, that is, the affairs of her firm in Kosovo are led by the brother of Kosovo’s head of diplomacy Hashim Tachi – Ganup Tachi.

From 1,088,699 hectares of land to which the Serbs had property  according to cadastral books, more than 80 percent were usurp by Albanians, while most of the companies were sold in a criminal privatization process, the foundations set out by the Privatization Regulation proclaimed in April 2005 by Soren Petersen, the then head of Umnik. Believe it or not, this document prescribes that it is not necessary to determine the origin of ownership, but it can also be done after the sale, by court.

This untold robbery takes place under the approval of the United Nations, although Security Council Resolution 1244 does not foresee any participation of the UN in the change of property rights in Kosovo and Metohija. Contrary to the determination that the acquired property rights of the state, legal entities and natural persons can not be changed without their explicit consent, Unmik, arbitrarily and contrary to Resolution 1244, usurped property rights and ownership of immovables and enterprises.

I think it is quite clear that Kosovo is not abducted because of democracy.