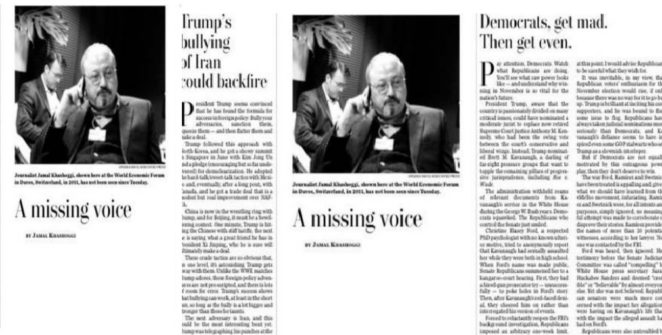 Washington Post printed ’empty column’ in today’s newspaper, for his missing Saudi journalist Jamal Khushgi. from Saudi embassy in Istanbul, So that the case of forced disappearing could be heard in front of the world and shared voices in the favor of missing journalist.

Jamal Khushagi, prominent Saudi journalist, who criticized Saudi Arabia’s policies, went to Saudi embassy in Istanbul on Tuesday afternoon, but he could not return again after entering the embassy.

According to the Turkish government, investigating on the principles and regulations ground is underway, the cooperation of the Saudi embassy has been requested, Nothing is found yet regarding Saudi Journalist.

The fiancy of the Saudi journalist Jamal Khashgi told in his statement that she had gone to Saudi Arabia embassy on Tuesday afternoon. where she was forbidden to enter with her fiancy and the journalist’s mobile phone was also taken into custody.

The fiancy added further that she waited till evening until he came out but he could not come out after she expressed concern over the staff, but the answer was not given by the embassy, after which the complaint filed in the police.