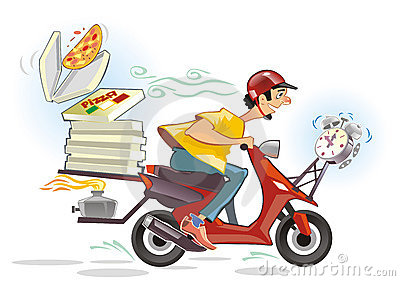 This heartwarming story involves a disabled restaurant employee, who was lucky enough to work for a business which really had his back. Holding down a job can be such a challenge for wheelchair-users, those with special needs and other disabilities, so it is very encouraging to see that attitudes are changing. In this instance, a customer made a complaint about the service provided by his pizza delivery driver, the Little Italy restaurant in Anchorage, Alaska.

The dissatisfied customer called the restaurant raging at the owner’s daughter over the phone,  ranting about the driver’s  manner, claiming that he was spaced out on drugs and an “idiot”. The restaurant informed him that the explanation for any oddness  was due to  the driver suffering from autism  and a mild speech defect, but the customer carried on ranting. So they fired him – the customer, that is, not the driver. Owner P J Gialopsos commented that it was not the first time there had been complaints about this employee, but once customers find out about his disability, they are usually fine about it.  However in this instance the complainer clearly had no sympathy for autism whatsoever. So the staff were told to take no more orders from this particular customer.

Little Italy is one of an increasing number of restaurants in the US who are welcoming special needs employees onto their payrolls, and who also choose to defend the said employees when customers become abusive.  The disability rights movement emphasizes that while no one who falls under this heading is asking for special treatment, it is important to raise awareness of why someone may not be behaving neurotypically, and to make allowances for that.  If someone is made aware of the issue, and still continues to behave abusively, it can be viewed as extremely rude and discriminatory behavior.