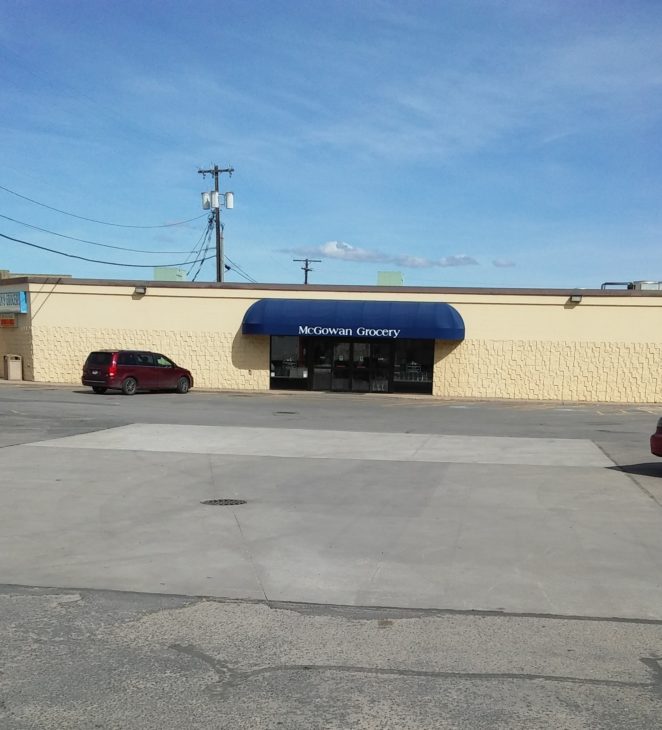 Have you ever stopped to consider what some plants and animals go through in order to survive? At times, the odds are stacked against them, in a big way. There are many examples all around us, though many people don’t take the time to notice.

The day before yesterday, I took my daughter to an appointment that was to last an hour. Rather than just stay there, I dropped her off and came back home. We made plans to meet after her appointment, in the McGowan’s parking lot.

McGowan’s is the only grocery store in town and it is situated a couple of hundred feet from where my daughter had her appointment. It was particularly handy since there is plenty of parking there, so I wouldn’t have difficulty finding a place to park.

McGowan’s has an interesting history. Before this was even a real town, there was a general store. A few years later, a tiny jail was built near the back of the general store. That general store was McGowan’s and it dates from the early 1800s.

There have been a lot of changes and the storefront is no longer facing west, it faces south. A couple of years ago, the owner had the entire parking lot repaved. The unusually harsh winters we’ve had for the past 10 years aren’t kind to the pavement, so it was needed. They did a good job, too. That is where this sequence begins.

This is McGowan's grocery store. You can just barely see the tail end of our red Pontiac Grand Prix over in the right, about at mid-frame. The cement slab that can be seen is the top of a very large dry well, to handle water runoff. There is no drainage system in town, so dry wells are the way to go unless businesses want water standing in their parking lots.

Around the dry well is the pavement. It was chip-sealed and after it had settled, tack was used heavily on any cracks. Tack is a combination of creosote, tar, and oils. It stinks at first and it is toxic until it dries. The dried tack can be seen in this image, too, as the dark lines that go roughly from left to right.

I walked to the end of the parking lot, directly behind where this picture was taken and was leaning against the pylons that serve as the back wall of the lot when I noticed something peculiar. There was a plant that defied the odds and was surviving, near the base of the pylon. 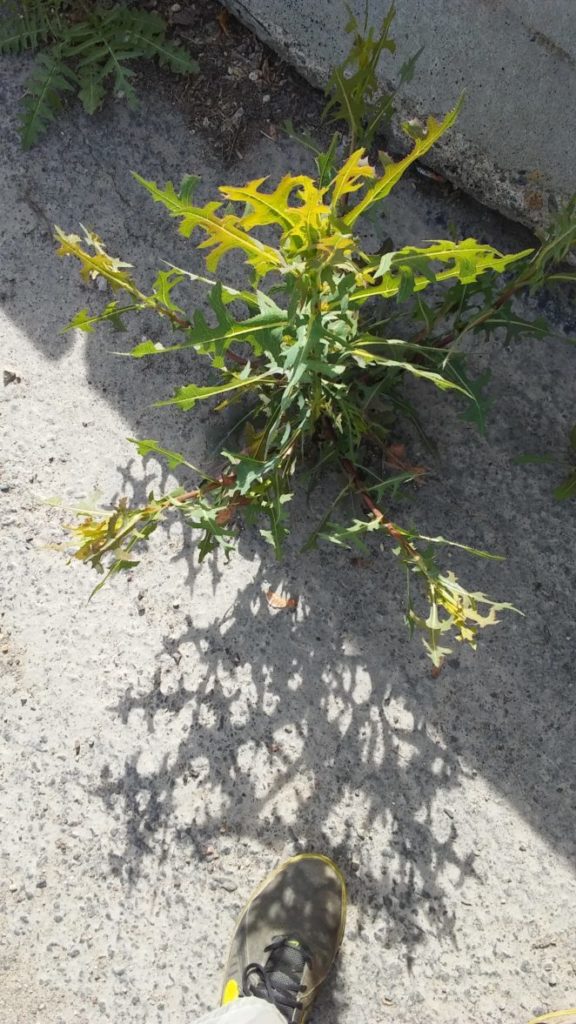 This is the plant. It is miner's lettuce, also known as wild lettuce or prickly lettuce. As can be seen in the picture, the pavement appears solid. There is actually a very small hole, about an eighth of an inch in diameter, that the seed was apparently able to find.

Although miner's lettuce is considered to be a weed, it is a hardy one. This plant is quite healthy and about 18 inches tall. Two other plants can be seen in the picture. One is another miner's lettuce plant right next to the pylon and the other is wild mustard.

All three plants are growing through tiny holes in the pavement, despite the inhospitable location. 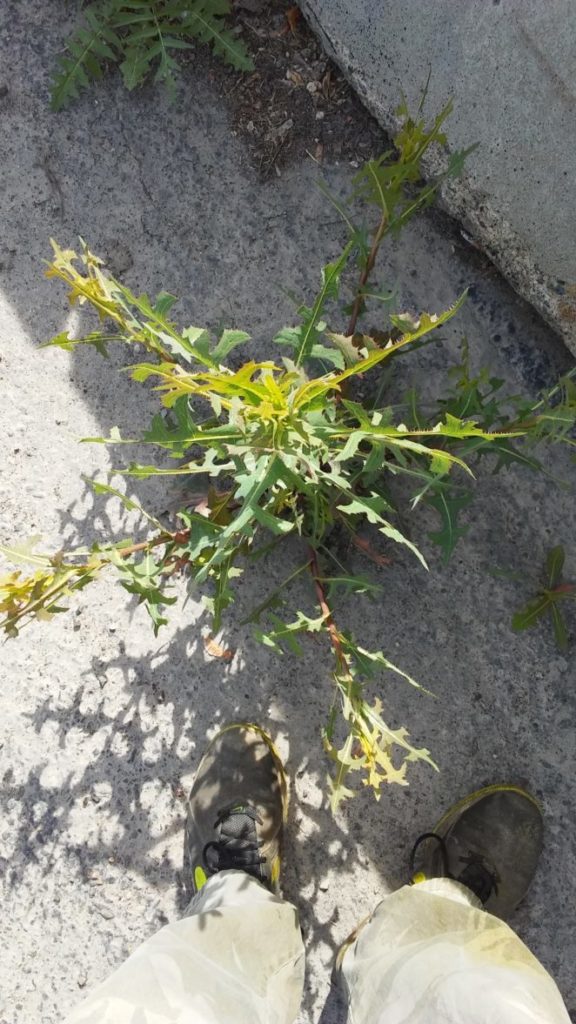 This picture is looking down at the plant from almost directly above it. The flatness of the leaves can clearly be seen. Normally, miner's lettuce grows so the broad part of the leaf faces the sun. When that happens, viewed from the side, the plant is almost paper thin and sometimes seems to disappear because of it.

That isn't the case here because it is located in such a way that it gets sunshine and reflected sunshine from almost every direction.

Incidentally, this kind of plant is edible but bitter. The stems and leaves contain a milky 'latex'. In some places, the latex is dried, which it does readily when it comes in contact with the air, and the dried substance is taken because of a euphoric feeling it bestows. It is also a relaxant and is calming for the nerves if a person can get over the bitterness. It is the latex that makes this plant bitter. Incidentally, domesticated and farmed lettuce also contains the latex, but in much smaller amounts. That is, until the lettuce bolts (goes to seed). 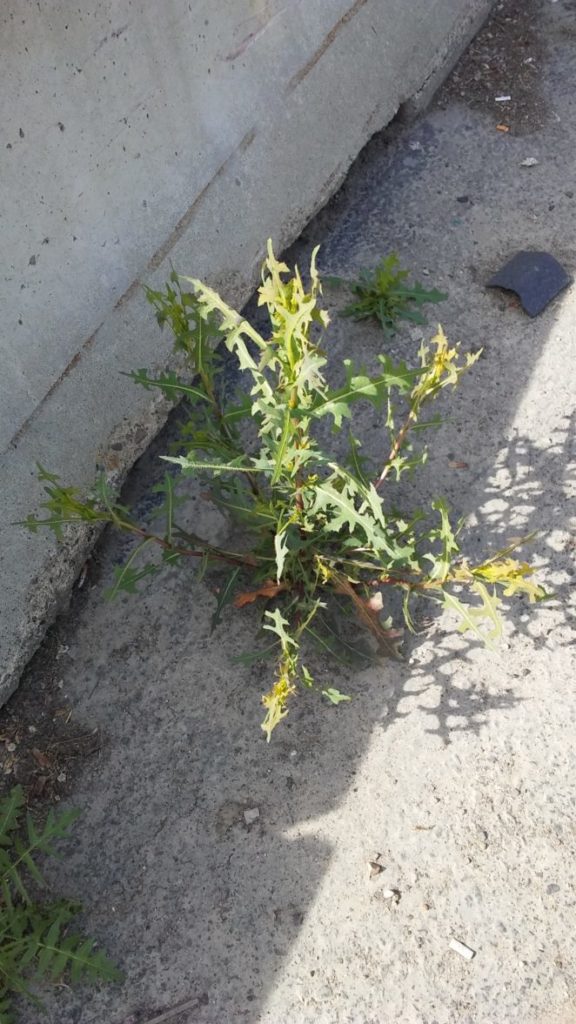 The plant from a different angle. This picture shows that the plant isn't growing in a crack. This, along with the other pictures, makes it clear that it is growing through a small hole. The hole is actually smaller in diameter than the diameter of the main stem.

These plants are surviving, despite the odds, and this miner's lettuce is actually flourishing.  All of these plants will probably be removed in the future, but for now, they refuse to give up. Amazing, isn't it?

This is a wonder of the sort that people can see when they are observant. Even common weeds can be interesting, don't you think?