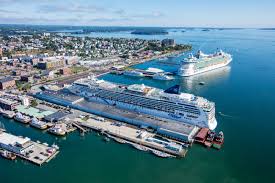 There are about 3,500 miles of coastline along the shores of the U.S. state of Maine. The coastline includes beaches, islands, peninsulas, bays, coves, and harbors.

The city of Portland, Maine was built on two hilly peninsulas that overlook Casco Bay. In the 18th century, it became a major ship and mast building center. By 1806 Portland was the sixth-largest port in the country.

Unfortunately, its success made it a target for the British during the War of 1812 and for the Confederates during the Civil War. During WW I the attacks came from German U-boats or submarines. Portland Harbor was rated the most important harbor in the continental U.S. because it was the closest harbor to Europe across the ocean. During the time of attack, the coastline and islands of Casco Bay were lined with artillery bunkers always on the alert for submarines. Today both fishermen and divers make claims that you can find sunken German U-boats somewhere in Casco Bay.