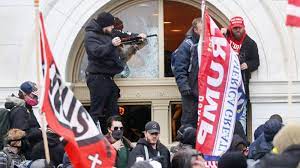 The writer of the article : https://www.theweek.co.uk/news/politics/957161/the-6-january-hearings-a-reckoning-for-donald-trump    is, as most people on Earth,  fully aware Donald Trump orchestrated the January 6th insurrection.

I say, most people on Earth, because Americans have, during the years of Alternate Facts,  (2016 – 2020) parked their brains and let Donald Trump control their perceptions.

What the writer, and most people do not comprehend, is that Trump expected those who stormed the Capitol to be killed. Only one was, before it was appreciated.  Trump, aware he lost, wanted to destroy the United States and cause a Civil War.

Had the security forces acted in the expected manner and shot and killed those who attempted to overthrow the government, the white supremacists and others would have made it impossible for Joe Biden to be President and Civil War would have been provoked.

The hearings concerning the Insurrection reveal more of the mental state of Donald Trump.  His mental imbalance is evident.  Remarkably, a few of his supporters actually now realise how they were used.

The question is do Americans know the world now sees the United States as it is, not as it has been falsely portrayed?