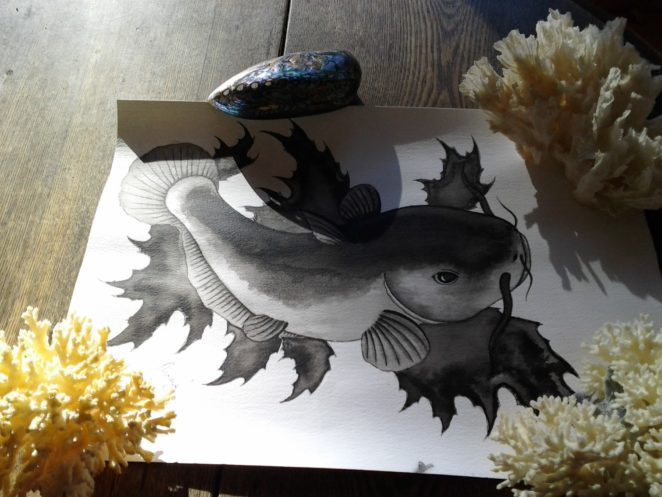 Nori explores after a few snores…

“She dreamed of forests, seas full of corals, the sound of shores under skies clear and blue.

the scent of orchids, sweet fern and morels and air found where wild and free flew,

the fragrance of cherries, woodland canaries and rain dances where the blueberries grew,

then fate or perchance, a man from a ranch, on some fish sycophants who ferry, rarely so few.”

Now, back at the ranch and up from her trance, Nori assessed her askance circumstance.

She hadn’t a chance, riding flying fish cans, for any tests of her single tailed pants.

“Um, Miss?”, Phlex said this, “if you’d like, I’ve some tricks to enhance any chance of your ambulance.”

“Love your brassiere there and bare skin so fair but, beware near bees and low trees.

I’ll further assert, a shirt might avert any unforeseen improprieties…

I’ll go try my best to clear up some mess but, I confess, not too many guests do we sees,

a place you can rest, where fish won’t infest, so until then, I must leave you with these…”

She sat in the dirt. Phlex gave her his shirt and served magic words that now made her float.

“Lets take you around, show you the compound and the ground which we dote, float and promote.

A sort of small town that no one had found, ’cause like myth fish from Tethys, its remote.”

Soaring is freeing with feet, fins or wings. Nori, adoring each breach in the breeze.

Warbling and speaking with birds and the Bee queen then flourishing a wink, swish and tease.

The stream was a dream, so fresh, sweet and clean, where she’d sing her Sirenese melodies.

Now Nori was seeing things tweak in her being and feeling wonder in these seas of green trees.

Phlex was a jerk, complex but, had work and a lech but, no pest so, they’d flirt.

One big C.E.O., had the world by the toe but, detested that the rest were still hurt.

En route to Duluth, “Oochenscoots” were a hoot with tributes from Loopy Newt Institute.

“Urchina” worked flute, on ocarina, a beaut but, on tuba she’d toot like a brute.

“Itchy the Swede” was fish for all reeds and blew woodwinds like the stars at night shoot.

Each eve, they convened, as darkness intervened, to swim some mighty sweet, night soiree scoot.

“The Fish”, as she called ’em could solve any problem and knew much more than they’d show.

They’d switch their shades often, while evolving an option, offering up three solutions then go.

Noris’ curiousness lured her to tail the fish, and spun scurrilous fun when she failed to follow,

when in her blind, backward creeping, found our tree keeper sleeping, “Tick Willy” of the meadows’ gray hollow.

If only Nori knew sooner this stealthy, mute crooner used tools for his unique, oblique speak.

…and like the hex of three wrecks, both dash off to Phlex, in a mermaid screaming, and blade gleaming streak.