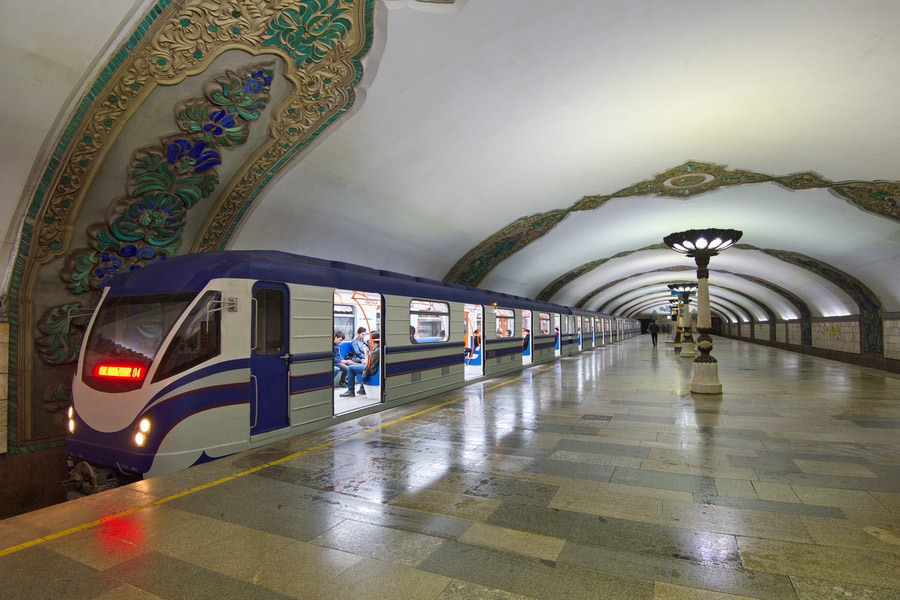 Metro in Tashkent, capital of Uzbekistan.

The metro is one of the one of the most beautiful in the world. It was opened in 1977, was the seventh metro built in the Soviet Union. It measures 36 kilometers, has three lines and 29 stations. The system is quite shallow, subway tunnels varies from 8 to 25 meters in depth. The powerful design of the metro can resist earthquakes up to magnitude 9 degrees on the Richter scale. Each of the 29 stations is different. The architecture and decoration cells showing their name. In designing the station participated prominent architects and artists of Uzbekistan. Décor comprising solid and stable, the materials: metal (in the form of engravings), glass, plastics, granite, marble, smalt, art ware and carved alabaster. Each cell is original artwork and centered on a particular theme. After the collapse of the Soviet Union in 1991, many stations have been renamed to remove references to communism. Trains which operate mainly from Russia and the former Soviet Union, but there are also new trains, which says the Institute for the production of trucks and machines in Tashkent, also here is done and repair the older trains. There are 168 wagons to be used, and the composition of a train makes 4 wagons. Average train speed is 46 kilometers per hour.