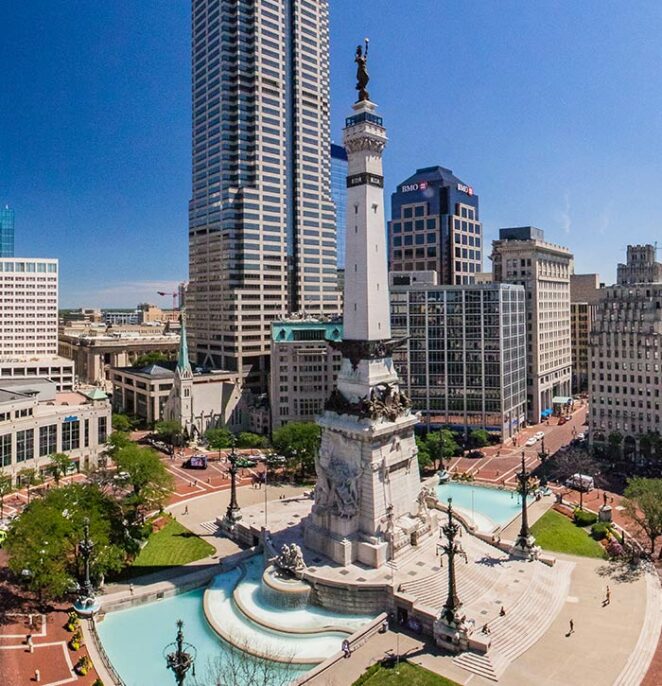 Originally the Native Americans who lived in this area included the Miami and Lenape tribes but were removed from here in the early 1820s. Indianapolis, Indiana was chosen as the state capital in 1820. The city is located in the exact center of the state and on the White River. The name of the city was a combination of joining the name Indiana wit polis, a Greek word for city. Therefore Indianapolis literally means Indiana City.

The French architect Pierre L’Enfant, who designed Washington D.C. came up with a city plan for Indianapolis. At the center of the city is Governor’s Circle, a large circular commons and Meridian and Market Streets converge at the Circle. The governor’s mansion was demolished in 1857 and today you’ll find a 284-foot tall neo-Classical limestone and bronze monument known as the Indiana Soldiers’ and Sailors’ Monument and the surrounding street has been renamed Monument Circle.

In the 1970s and 1980s, Indianapolis had problems with urban decay and it was necessary to revitalize the downtown area. This began in the 1990s and a great help was the opening of Circle Center in downtown. Of course, the city’s claim to fame is being home to the Indianapolis 500 car race held annually at the Indianapolis Motor Speedway over the Memorial Day weekend in late May.